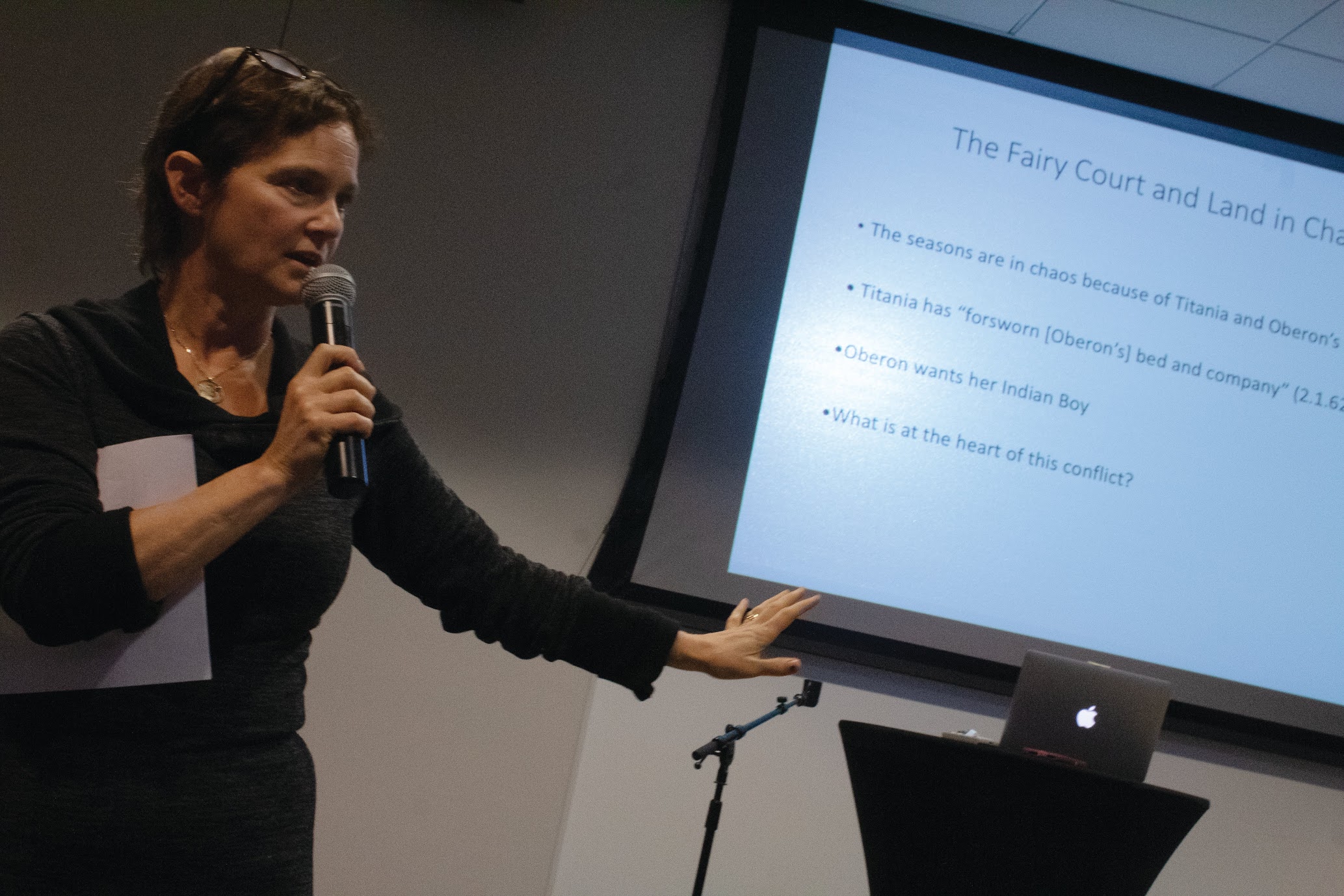 Caroline Bicks gives a pre-performance lecture on the role of females in Shakespeare’s “A Midsummer Night’s Dream” in the CCA on Nov. 21. Photo by Antyna Gould.

“A Midsummer Night’s Dream” is arguably William Shakespeare’s most famous comedy. The play is a staple of the English curriculum in high school and college classes and has been produced countless times on both the stage and the screen. On Nov. 21, a live broadcast of the National Theater’s production of “A Midsummer Night’s Dream,” which was produced in London’s Bridge Theater, was shown at the Collins Center for the Arts.

Directed by Nicholas Hytner, this version of Shakespeare’s classic tale takes a darker, more modern approach than the dreaminess commonly associated with the play, with Hytner choosing to swap many of Titania’s lines with Oberon’s.

Much of this play is impacted by gender roles and the relationships between men and women. In many of Shakespeare’s comedies, there is a power dynamic that strays from the “norm” and the conflict is resolved when the power dynamic is restored to “normal.” Hytner’s decision to change the roles of Titania, played by “Game of Thrones” actress Gwendolyn Christie, and Oberon, played by Oliver Chris, challenges the gendered power dynamic that is addressed in the original play.

Before the broadcast of the play, Stephen E. King Chair in Literature Caroline Bicks gave a presentation titled “Midsummer Night Queens.” In her presentation, Bicks addressed the three queens in the play: Titania, Hippolyta and Queen Elizabeth. Bicks is also a professor in the UMaine English Department and has focused most of her classes and research on Shakespeare.

“When I heard that the director was switching Oberon and Titania’s lines and storylines around, having her drug him to get the Indian boy that he has sworn to raise for the sake of his votaress, I was skeptical,” Bicks said, after pointing out that much of the play explores patriarchal power and its effects on female communities. “But I thought this gender-flip worked some real magic; you sensed that Oberon learned some heart-felt lessons by occupying a subservient role, and that Titania was not so much vindictive as she was righteous in her rage, especially because she was doubling as Hippolyta, the imprisoned Amazon queen whose love Theseus claims to have won ‘by doing thee injury’ at the start of the play.”

Throughout Hytner’s rendition, Titania disrupts the gender hierarchy. In comparison to Hippolyta, who has been captured by Theseus, she is an independent and powerful woman who lives outside of the walls of Athens, free from the laws of the city. In the opening scene, Hippolyta, also played by Christie, is shown inside of a glass box. Inside the walls of Athens, gender roles are congruent with the ‘norm’ of the time. Men held all of the power, and women were subservient to them. The decision to have Hippolyta in the glass box furthers the dichotomy of gender and power within the city.

“It’s still a problematic play, though, no matter how you cut it. It’s hard to find straight-up comedy in a plotline that involves drugging someone to make them fall in love or to get what you want from them. I try to emphasize to my undergraduate students that this play is not a celebration of romantic love, but rather a critique of what must be sacrificed in order for institutions like marriage, the law and government to endure. Luckily for us, Shakespeare also included the Mechanicals’ hilarious play-within-a-play so that we can laugh at ourselves and those institutions as well,” Bicks said.

Typical of the genre of comedy, if a norm is broken or strayed away from, there must be a return to order in the end. These women can be in power, but they cannot maintain it. Ultimately this play ends with a triple marriage, returning the power back to the men.

This play is still relevant today. Dealing with themes of power, sex, lust and various facets of love, it can be compared to relationships and dynamics that are evident in modern society.

The next NT Live broadcasts will feature “Hansard” in the Collins Center for the Arts on Dec. 6.