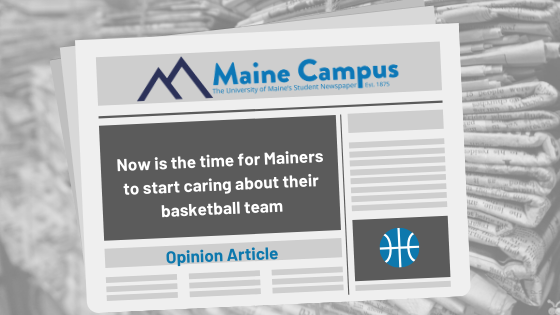 Last Saturday, Nov. 9, the Red Claws, Maine’s basketball team, opened their season in Delaware against the Blue Coats with an uncharacteristic amount of national sports coverage, almost entirely due to a player named Tacko Fall. While basketball culture in New England is largely dominated by the Boston Celtics, there is a growing interest in the Maine Red Claws for their 7-foot-6-inch center from Senegal who is splitting his season between Boston stardom and what is essentially the junior varsity league. While cutting his professional ball-playing teeth may be a grind for Fall, it offers Mainer’s a cheap opportunity to get a front row seat to the development of one of the NBA’s most talented rookies.

The Red Claws are a part of what is known as the G League, which resembles the structure of the minor leagues in baseball; there is a parent team composed of the best athletes, and then there is an affiliate team of largely underpaid players who hope to ascend to the big leagues. For teams with filled out rosters, they can sign athletes to two-way contracts which allows athletes to play for both leagues as a means to hold onto a potentially valuable player while also maximizing their minutes on the floor. This is the case with Fall.

Fall only began learning the game of basketball seven years ago, and didn’t particularly like it, but due to the natural aptitude his height afforded him, he joined the team at the University of Central California to then be drafted by the Celtics and rise to stardom. Likely as a result of his memorable figure and name, which is actually short for Elhadji Serigne Tacko Diop Fall, but also for his friendly attitude and shot blocking abilities, Fall became a Boston sensation almost immediately. In numerous instances during the preseason and early season games, fans relentlessly chanted for Celtic’s coach Brad Stevens to give Fall minutes on the floor, and once he did and Fall inevitably dunked the ball or blocked a shot, the audience’s reaction threatened to bring the stadium down.

This level of fame for a player in the G League is unprecedented, and affords Mainer’s an interesting opportunity to capitalize on the growing business model and redefine Portland’s, and Maine’s, relationship with the national basketball community. Clearly the NBA has invested in the young league primarily for player development and not to generate more revenue, as Forbes reports that it is  “estimated that only a handful of G League franchises turn a profit each year.” This is mostly due to the fact that the most expensive seats at a Red Claws’ home game are $32, while travel, lodging and salary expenses still have to be covered. Meanwhile, regular G League players are far from owning the expensive cars and mansions NBA players have as they live on a relatively modest $35,000 for each five month regular season.

While this “junior varsity” league may not sound like much, recent investments from the national league and the influence of Fall’s wide-spread notoriety, the Red Claws stand to affect the very identity of Portland. However, the team is on a time limit, as Fall will not likely play another season in the G League with how quickly teams tend to snatch up exciting prospects that put fans in seats. Thus it is up to the patron’s of Maine and Portland to embrace Fall and the Red Claws to ensure the survival of the newest staple to the state’s sport culture.