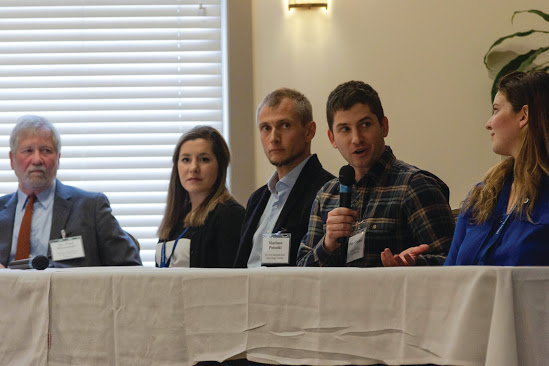 Students and staff give an overview of the team's April-June expedition to Mt. Everest's summit on Friday, Nov. 15 in the Alumni House. Photo by Brendan Ward

On Friday, Nov. 15, six University of Maine faculty and students discussed their expedition of Mount Everest, which took place this past spring, during a Climate Change Institute panel.

The expedition was part of a series of “Extreme Expeditions” meant to discover the effects of climate change on certain glaciers of Mount Everest. The leader of the expedition and director of UMaine’s Climate Change Institute, Dr. Paul Mayewski, was a member of the panel.

The other members were Assistant Professor Aaron Putnam, doctoral students Mariusz Potocki, Heather Clifford, and Peter Strand, and masters student Laura Mattas. Each member of the panel took part in the expedition with the Climate Change Institute and spoke about their findings from the trip that took place in April and May of 2019.

The group researched a number of areas during their time on Mount Everest, which included testing water chemistry and quality levels, studying landmarks, the landscape, and the irregular behavior of the jet stream over the mountain.

“The very best thing about the work we get to do is that we can travel all over the world to fantastic places, bringing with us students who get to have life-changing experiences,” Mayewski said. “You really are absolutely in your own world up there. It’s one thing to get up to these mountain ranges, it’s another to be able to think about what you’re doing and collect good science too.”

National Geographic and Rolex financially supported the exposition and selected Mayewski to put together and lead a team of scientists to climb with him. This was his fourth trip to Mount Everest and his 55th career expedition. Each member of the team lived at the “Base Camp,” which was located on melting glaciers at the base of the mountain. With around 1,000 travelers living in the camp, the UMaine team was able to take advantage of the amenities and travel safely on one of the most dangerous mountains in the world.

“When we arrived at Base Camp there was a snow storm so we couldn’t really see anything about the landscape,” Clifford said. “In the morning, the shock set in and we could see the mountains and glaciers. The view was absolutely gorgeous, there were so many people and helicopters flying overhead.”

“Paul Mayewski directed the entire biological, geological, glaciological, meteorological, mapping and multimedia enterprise from the Base Camp,” Journalism professor and moderator of the discussion, Beth Staples, said. “Mariusz Potocki was a member of the team that attempted to summit. He drilled the world’s highest ice core —at 8,020 meters on South Col.”

The UMaine-led expedition made headlines recently as it set the world record for the most comprehensive assessment of Mount Everest in history. Mount Everest and its glaciers supply 20% of the Earth’s water and will wreak havoc on the people living in the Himilayan area if water quality continues to change, glaciers melt further and the planet continues to warm.

“[The researchers] all had different roles on the expedition, so I think hearing each of them share their experiences, successes and challenges on the world’s highest mountain is fascinating,” Staples said. “The discoveries from the scientific work they all conducted there may provide insight into solutions to protect the planet from climate change.”

Members of the team Putnam and Strand flew drones around during the expedition to collect imagery and data, and the team is now using the information to create digital maps of the landscape in order to complete further research.

“The biggest takeaway was just how fast this region is changing,” Strand said. “The glaciers are melting and being rearranged because of the warming mountains. This is why it is so important to deliver the message with our photos and accounts.”