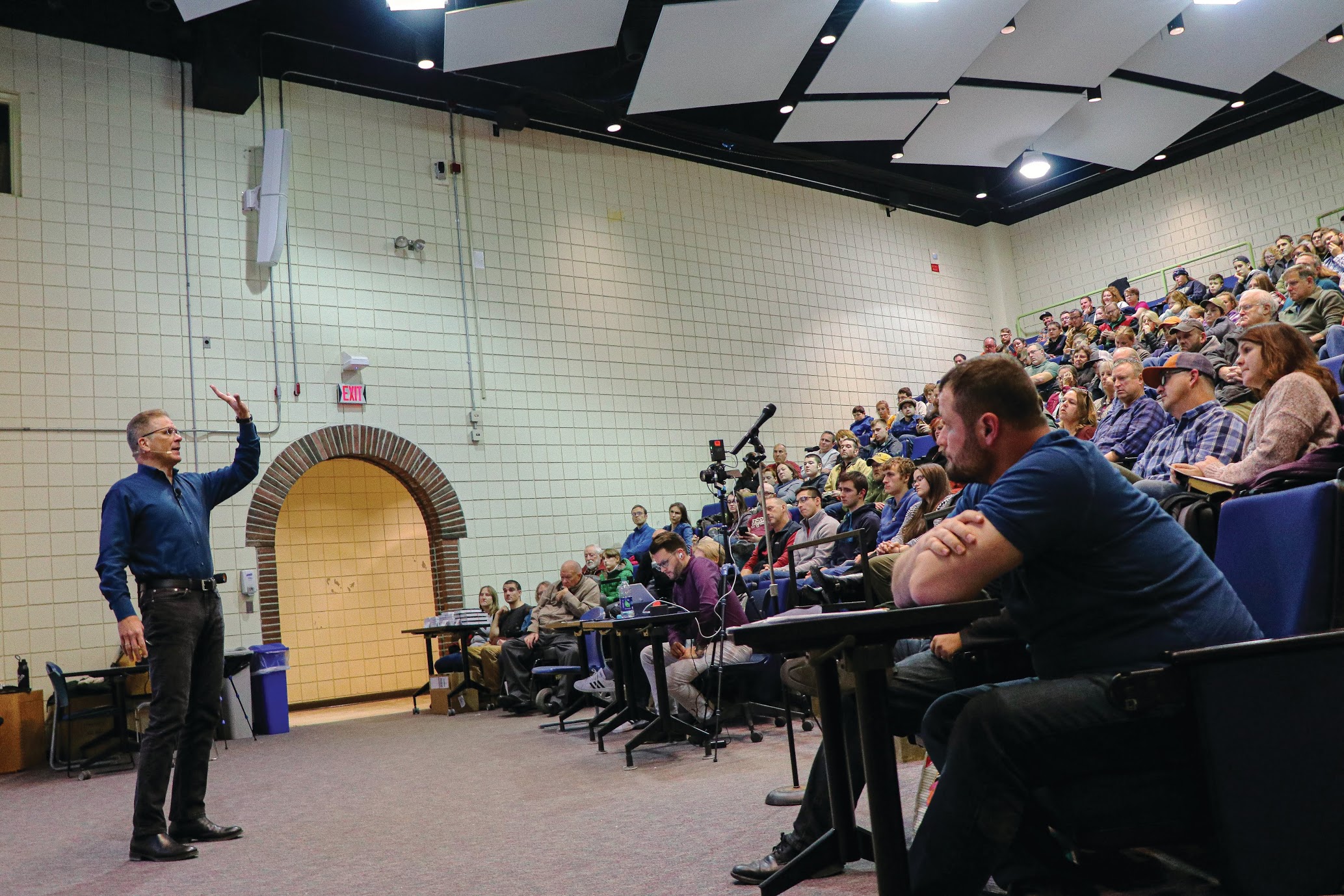 Dr. Frank Turek, coauthor of I Don’t Have Enough Faith to be an Atheist, presents and cross-examines Christianity in Neville Hall on Nov. 13. Photo by Will Bickford

On Wednesday, Nov. 13, Dr. Frank Turek gave a presentation titled “I Don’t Have Enough Faith to be an Atheist,” which was modeled after his book and television series under the same name. Dozens of families, community members and students gathered in Neville Hall to hear Turek’s lecture, which discussed evidence that he believes points to the existence of a God and furthered his evidence to avow the existence of the Christian God.

Turek was brought to campus by the University of Maine Ratio Christi group, which meets on campus to discuss religious world views and Christian material.

In his lecture, Turek elaborated upon four questions throughout his lecture that he believes prove Christianity’s beliefs: Does truth exist? Does God exist? Are miracles possible? Is the New Testament, specifically the resurrection of Jesus, true?

He claims that truth is not relative and each person does not have their own truth. Truth must be absolute.

Turek then went on to explain how “if the universe has a beginning, then it must have a beginner … there can be no miracle without a miracle worker.” Citing evidence that the Big Bang did happen, he explains how the universe was created so delicately in balance that it could only be at the hands of a god that we are here today. For example, Turek explains how things like the human genome, the position of the Earth in our Solar System and the creation of tens of thousands of galaxies are far too intricate and involved to all have happened by chance.

At this point in the lecture, Turek states that the god that he is speaking of could be any god of any religion that created the mass that exploded in the Big Bang, but he suggests that you have to look at the remaining evidence and his last two questions to prove that the Christian God is real.

Following his in-depth analysis of the creation of the universe, Turek touched on the idea of miracles and the truth of the New Testament. He discussed and analyzed evidence that Jesus was resurrected after being nailed to the cross, which he argued is a miracle. Turek said that the Bible is full of miracles; from Noah’s Ark to the creation of the Earth and humankind. However, he suggests that the only miracle that matters in proving that God is real is the resurrection of Jesus. He supported this claim by sharing early sources, eyewitness accounts and stories that point to the truth of the resurrection. He ended this argument by stating that if the resurrection is not true, we would not have seen a sudden burst in the popularity of Christianity out of Judaism in Jerusalem almost immediately after the supposed resurrection.

In addition to his lecture series, Turek is also the host of a radio talk show and the president of CrossExamined, a non-profit ministry that conducts “I Don’t Have Enough Faith to be an Atheist” seminars around college campuses to address the fact that three out of four Christian youths leave the church while in college.

The Ratio Christi group meets every Thursday at 6 p.m. in Bennett Hall, room 102.