Twitter announces ban on political advertisements: what does this mean for the platform?

Home /Opinion/Twitter announces ban on political advertisements: what does this mean for the platform? 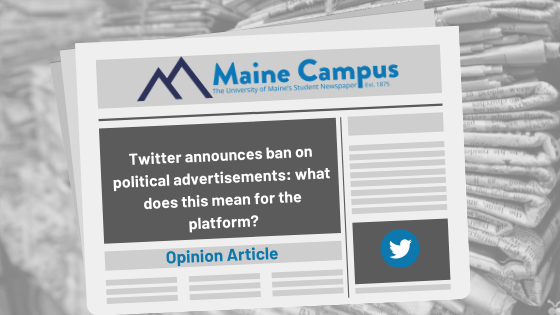 Twitter CEO Jack Dorsey announced last week that by the end of this November, the social media platform will be banning all forms of paid political advertisements as well as promotions for a number of hot-button topics.

The decision comes in the wake of an examination of social media’s impact on the 2016 election, as well as a corporate decision to remove posts that could potentially influence users under false pretenses. Although at first this decision may seem alarming, it actually has the potential to positively impact Twitter as a whole, especially in regards to user experience.

As can be expected, the decision has drawn a wave of feedback from both affirming and dissenting viewpoints.  The obvious argument in this situation concerns the concept of free speech; many view Dorsey’s announcement as a violation of that right, but others see it as an invited change.  Not only will the new policy remove annoying and occasionally borderline harassing advances from politicians, but it will also deescalate the hostility in the environment of Twitter as a whole, especially during election seasons. Twitter hopes to foster meaningful and productive political discussions among users that otherwise wouldn’t be as genuine with the prodding of political endorsement into people’s timelines.

It is an unfortunate reality that political public relations that use social media as a channel of communication can nowadays be viewed in the same category as propaganda. Philosopher Jason Stanely stated in an interview for Vox that the two are intrinsically linked, and, in this case, this assessment is especially applicable. This lies in the commercialized nature of today’s media and the tendency of media and its consumers alike to give attention to what is commercially popular rather than what is truthful. This leads to the creation of false narratives as well as a larger focus on topics that are salient on platforms purely due to the volume of attention they receive rather than the importance or validity of that topic.

The new standards imposed by the platform will introduce an unfamiliar environment to candidates in upcoming elections that will surely lead to the reformation of candidates’ strategies for reaching millennial voters who frequent Twitter. The obvious remedy to this issue would be a turn to platforms that have not enacted the same ban, namely Facebook. However, with the changing site comes a separate and older demographic of potential voters. CEO Mark Zuckerberg has remained true to his pledge not to ban such advertisements, even after Russia’s utilization of the platform in the 2016 election that spread false information to its users, and more recently with the launching of an ad campaign by President Trump which seeks to spread false claims about Former Vice President Biden and his son’s actions in Ukraine. Democrats retaliated by running fake ads of their own to test the boundaries of Facebook’s policy, including a fake campaign that stated, without any evidence, that Zuckerberg himself endorsed the reelection of President Trump. This testing on behalf of the Democrats has brought to light worrying implications about the lack of restrictions on what information politicians can push to the public and how easy it is for false information to be spread to massive audiences.

The effect and overall detriment caused by paid political ad campaigns can be plainly seen. They aid in the spreading and sensationalizing of misleading information and have powerful impacts on the political decisions of voters down the line. The moral implications of this issue are additionally hard to ignore. Despite the knee-jerk reaction to disapprove of Twitter’s banning of this type of advertising on the basis of free speech, it is important to take into consideration the positive implications such a change holds in regard to our media consumption and exposure to falsities not only during election seasons but in our media interactions in general.

NHL Recap: Bruins go 1-2-0 on the week
Research for all: UMaine can do more to improve undergraduate research funding