What did the Orchard Trail fence do to you?

Home /Culture/Campus & Community/What did the Orchard Trail fence do to you? 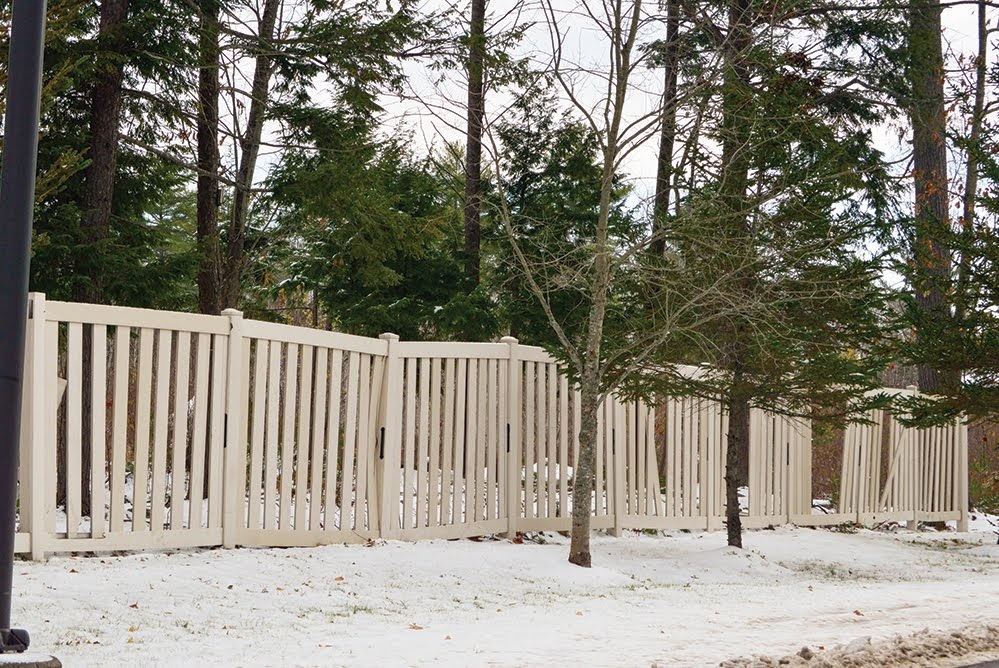 UMaine students have been throwing themselves through the fence lining the Orchard Trails Apartment complex driveway as a form of entertainment. Photo by Haylee Scovil

Orono, Maine; a place where running through a fence has become the recreational activity of choice for college students. The white fence that once marked the Orchard Trails (OT) Apartments complex property line has received endless abuse for no apparent reason. OT now owns the property directly behind the fence, making the existence of the fence unnecessary — except, of course, for hurling your body through it.

This unique activity has gained popularity through videos posted on various student-run Instagram accounts. Most videos are simply of successful fence-destroying, featuring some failed attempts. But an undergrad student, who wished to remain anonymous, took the entertainment value to a whole new level over Halloween weekend this year.

Dressed as Forrest Gump, the student decided it would be funny to record clips of her running across known spots in Orono. Gump’s final destination? Directly through the OT fence, of course.

“The idea for the video actually came about after I was already in the costume,” the student said. “My roommate and I just kind of joked about taking clips of me running around all over town, and I was [the designated driver] for the night so it was easy to get from spot to spot. The fence bit was a spur of the moment idea while we were trying to figure out a way to end the video.”

The video has almost 12,000 views on the Barstool Black Bears Instagram account and thousands more on the Maine Day account. The student assumes this is how she was identified and contacted by the Orono Police Department, resulting in a $350 fine for damaging property, which she admits is a fair consequence.

When asked if she had previous experience crashing through the fence, she explained that this was her first time.

“I had not run through the fence before. I love the video and I love that it made people smile, but in retrospect, I probably wouldn’t do it again because, one, damaging other people’s property isn’t a great thing to do and, two, my wallet hurts a little,” she said.

As for the employees at OT, they don’t seem too concerned, even laughing about the topic of this article when interviewed.

“The cops have been on it. If they catch you running through it, you get a $350 summons,” says Nicole Keonig, a leasing manager at OT. “We keep putting it back up because it’s easier than building a new fence. It doesn’t cost much to repair it. Our maintenance people are able to just go out there and put it back up. It doesn’t take much; you just pop the boards back in. It’s part of our daily routine at this point. You know, if you were working at a store you have to check the bathrooms, restock, etc. For us it’s ‘fix the fence!’”

It’s impossible to determine who the first person to run through the fence was, when they did it and what they were thinking while smashing through the fence. Koenig assumes it was around the time the property went up in 2006, although she’s only been an employee at OT for six months. During her short time as the leasing manager, she’s seen the number of occurrences escalate dramatically. When asked what OT planned to do about the problem, she shrugged.

“I don’t think we have any set plans right now. We’ve talked about taking it down and keeping it up, but now that it’s winter we’ll probably leave it. They don’t do it as much in the winter,” Keonig said.

The frigid air may discourage even the most avid fence destroyers, although snow tends to provide a softer landing than the ground, so we’ll see what winter has in store for the fence.

The motivations behind the not so small army of young adults who throw themselves through the fence continue to be a mystery.

“I can’t really speak to why so many people do it. I think everyone has their own reason, whether it’s trying to one-up the last person, doing it for the story or needing a conclusion to a short film,” the student from the video said. “The common thread is that we’re all young and occasionally kind of dumb. I’d recommend against running through it if you’re thinking of doing it, cause at the end of the day it is someone else’s property and someone else is gonna have to fix it. Also, that fence has been through enough.”

Maybe there’s an excess of built–up energy and anger that students who attend the University of Maine need to get out. In that case, try hitting the gym, not the OT fence. Just an idea.