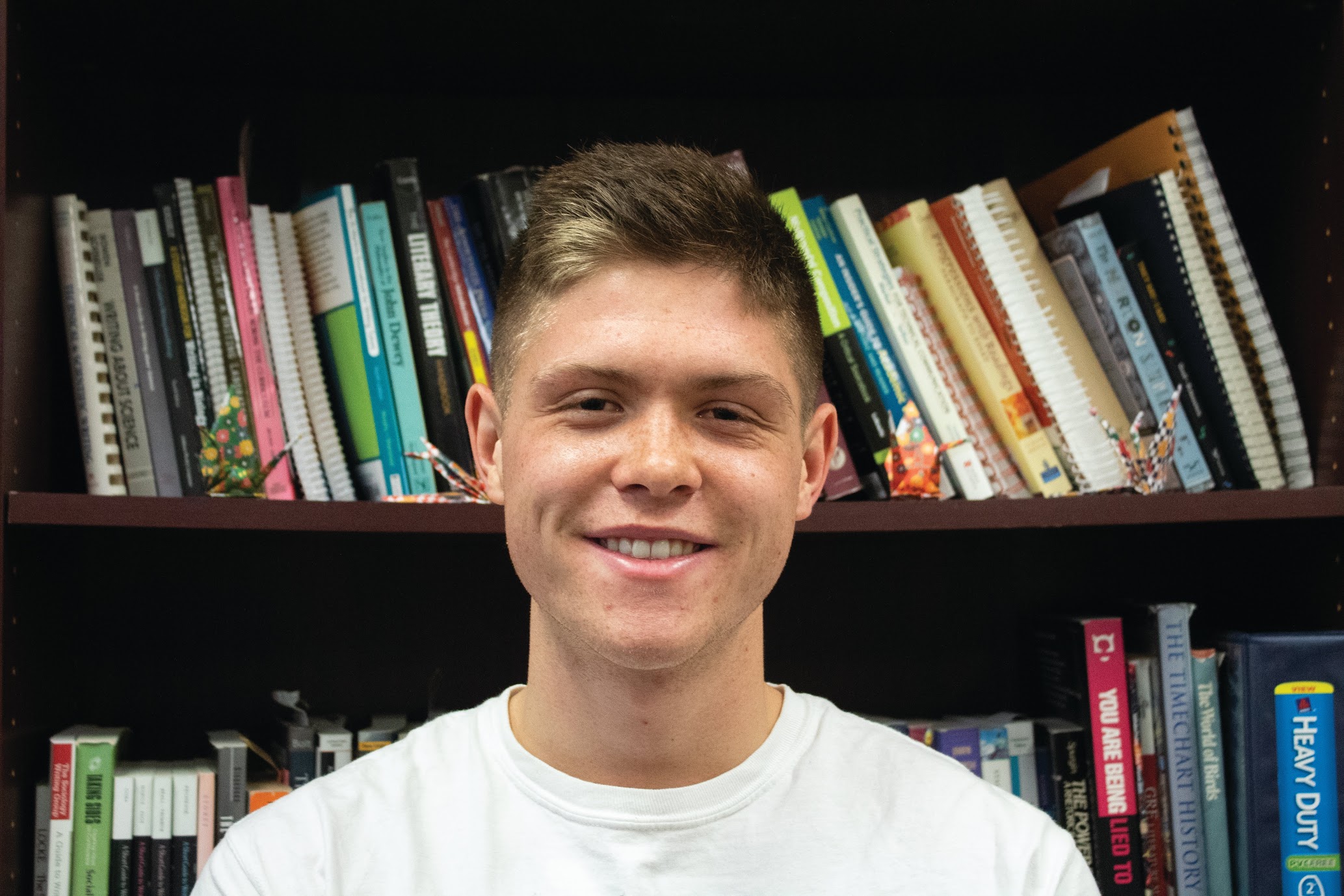 Nolan Altvater’s friendly presence paired with a contagious smile is enough to draw students into the Writing Center located into Neville Hall. Photo by Antyna Gould

Altvater, a third-year English and secondary education student, is currently enrolled in ENG 395: English Internship, the prerequisite course a student must pass in order to become a tutor in the UMaine Writing Center. This course has already afforded him the ability to explore the many ways in which he can work on his tutoring as well as be involved with Native American communities in Maine.

“I am not a tutor… but the professor gives you a lot of chances beyond tutoring. I’m doing a lot of research with tutoring right now; I already have one internship on campus through the Wabanaki Youth in Science Program (WaYS). So, I’m taking my work with that and converging it with tutoring work and exploring ways to relate those to each other,” Altvater explained. “[WaYS] is a program rooted in science but it is Native American scientific methods so a lot of it has to do with oral storytelling and oral discourse, so that is also implementing tutoring. Using those [practices] to make it more accessible to Native American students is my main goal.”

Through WaYS, Nolan has been connected to a number of opportunities around the university including a recent research project done in conjunction with the Penobscot Nation and UMaine researchers and scientists.

“I did a project that involved exploring ways to take that Native American scientific community, at the water quality station, and the communications and science departments here and, doing a research project where they came together, [we found] ways that two different communities could come together and do work together,” Altvater said.

Altvater was awarded the Margaret Chase Smith Policy Center award for policy-related research for his work with the different groups and was presented as “Covering Traditional and Western Scientific Methods to Highlight Penobscot Sovereignty.”

Attending UMaine has allowed Altvater to work with these two large forces in his life; his Native American identity and how to use his educational, teaching and research skills to benefit Wabanaki peoples.

“I moved away from my reservation when I was little so I didn’t grow up [in] a Native American family or the culture of it,” Altvater said. “But when I came to college I had the internship through the WaYS [program] which really helped me find that native identity that was still inside me.”

This self-realization coupled with his community-oriented research has given him the opportunity to broaden his horizons and approach ideas regarding Native American identity.

“Through the work of that [research], it has really established a Native identity in me which has also … inspired me and [I’ve] found passion to implement that into my educational work that I want to do as a teacher and my pedagogy decolonizing education,’” Altvater said.

His pedagogy, or teaching mission, is in part concerned with “changing the world of education to make it relatable, where kids have the critical consciousness and a self-conception of their own identity and what’s really special and true to them.”

Realizing one’s own identity is crucially linked to Native identity for Altvater. Though it is a complex task that seems almost at odds with traditional academia, which has hardly been an inclusive space, Altvater has a positive outlook about working to promote Native American identity.

“I feel fortunate to be here and be in the position I am in today [and] I want to use that for other people,” Altvater said.