Editorial: Racial considerations in the language used around mass shootings are vital

Home /Opinion/Editorials/Editorial: Racial considerations in the language used around mass shootings are vital 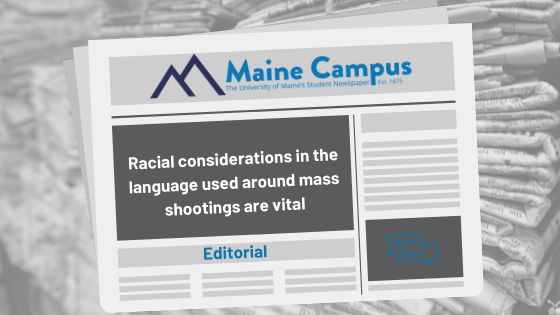 The Gun Violence Archive has logged 385 mass shootings across the U.S. as of Dec. 1, 2019. Just five days later, on the morning of Dec. 6, another shooting was added to that list, when three were fatally shot and eight injured in the shooting at the Naval Air Station in Pensacola, Florida.

The shooter was identified as a 21-year-old Muslim man and member of the Royal Saudi Air Force located at the Pensacola Naval Air Station. When the religious and ethnic identity of the shooter was revealed, the conversation around the shooting immediately shifted.

As mass shootings become all too common in our country, the process the mainstream media takes in reporting on, and the way society talks about, the incidents have developed a clear pattern. If the shooter is white, then the narrative shifts to how “uncharacteristic” or “unsuspected” the incident was, and the shooter is dubbed a “lone wolf.” If the shooter is a person of color, they are added to the mass known as being an “other” or a “foreigner.”

Gov. Ron DeSantis of Florida put this racialized linguistic practice into play when he stated that the government of Saudia Arabia is “going to owe a debt,” to the U.S., “given that this was one of their individuals.”

There is no denying that the shooting at Pensacola was a tragedy. The shooter took the lives of three innocent individuals who were attempting to protect others around them. At the most basic level, no matter the age, gender, race or ethnicity of the shooter, the act of taking someone else’s life in no way deserves to be defended.

Yet research conducted by Emily Wheeler of San Jose State University has shown that while actions of white shooters “are not excused by the media, they are often rationalized as being a result of the shooters’ mental illness and are described as uncharacteristic or unexpected events.” In juxtaposition, non-white shooters and their motivations are “overshadowed by their more obvious physical differences.”

Professors at the University of Washington and Carnegie Mellon University found in their study “What Counts as Terrorism? Racial heuristics and media portrayals of mass shooters,” that in a comparison of two shootings, one with a white perpetrator and one with a Muslim perpetrator, “media coverage disproportionately emphasized several racialized aspects” of the Muslim man’s identity, including his Middle-Eastern heritage, references to his family members as “foreign-born immigrants,” and his “religious expressions in racially divergent ways.”

When the media takes part in racialized coverage, they influence the conversations around the events. By characterizing shooters on their race, they deepen the already existing racial divides within our country and proliferate an unjust “us versus them” mentality, where white shooters are seen as abnormalities and shooters who are people of color are immediately suspect of terrorism.

The same research from professors at the University of Washington and Carnegie Mellon University enforces this point by emphasizing how the Muslim community was expected to respond and condemn the shooter’s actions before his religious affiliation was even known and made public. The shooter’s skin color immediately tied him to an entire religion which then felt it necessary to defend themselves and prove that the man was not a representation of Muslim culture as a whole.

The Pensacola shooter has been characterized as an “other” in this sense. Coverage of the shooting from the New York Times recounts statements from the shooter’s colleagues and friends on how he had become “more religious” after returning from Saudia Arabia and seemed to suggest this as a rationalization for why the shooter is now under investigation for terrorist motives, despite having no apparent affiliation with international terrorist groups.

In short, white individuals have committed more mass shootings than any other racial or ethnic group. Yet the language that has evolved around shootings perpetrated by white shooters compared to the language around non-white shooters reveals how race is sensationalized in these incidents.

Mass shootings never get easier to talk about, and after each incident, there are vital conversations happening about gun control, gun safety, mental health and how to respond to tragedy. But as we move forward, we need to ensure awareness of the language that is used and surrounds the race of the perpetrators, in order to avoid wrongfully villainizing minorities.