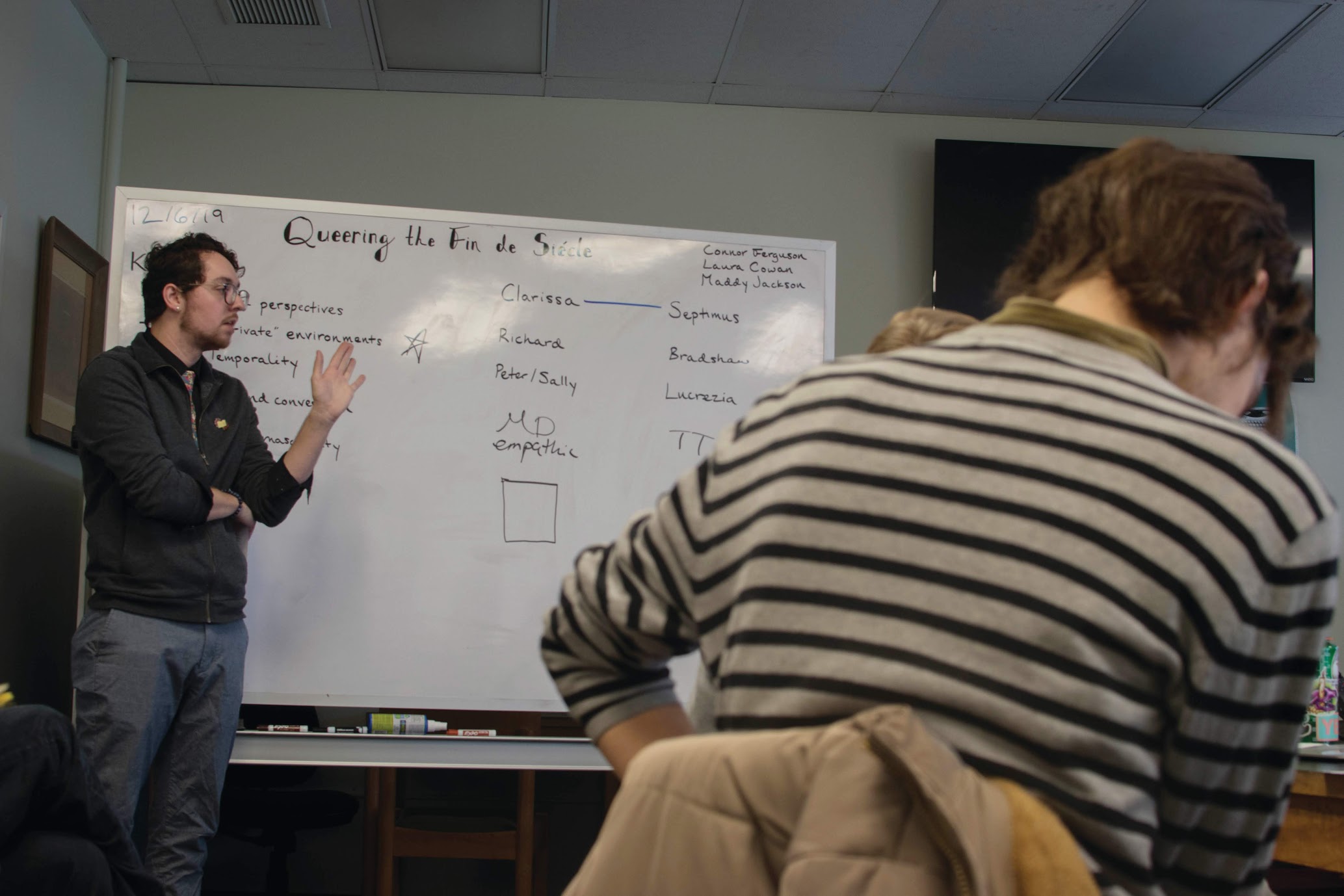 Connor Ferguson, a fourth-year English student presents his research on queer representation in modernist novels on Friday, Dec. 6 in the Writing Center. Photo by Antyna Gould

On Friday, Dec. 6, the University of Maine Writing Center hosted a lecture from student Connor Ferguson titled “Queering the Fin de Siecle.” Ferguson is an English student and McGillicuddy Humanities Fellow. This lecture and discussion panel was a part of the culmination of his fellowship research. Laura Cowan, English professor and project advisor to Ferguson, introduced the event and Ferguson followed with a lecture which then opened up a roundtable discussion. Students, grad students, professors and community members packed the Writing Center, eager to engage and listen to the important issues that Ferguson brought to the table.

Ferguson’s project for the Clement and Linda McGillicuddy Humanities Center (MHC) ties in with an English class he’s taking on Modernist writers Rebecca West and Virginia Woolf. His interest in the subject and his research can be traced back to before he started college, however, and the questions he is interested in have been on his mind for a long time.

“I am originally from Iowa, I moved to Maine in 2017 and started attending UMaine in the fall of 2018. I identify in the LGBT community. I identify as gay … My entire life I have always been looking for queer narratives or queer characters in the music I listen to, the movies I watch, the books I read,” Ferguson said.

Ferguson’s personal relationship his research is a driving idea for Ferguson and in an English class last year, he found that this project could be a possibility for him.

“It wasn’t until I took Modernism with Laura Cowan, that I realized I wanted to do this project,” Ferguson said. “The title of this project is ‘Queering the Fin de Siecle.’ The fin de siecle is this term that means the end of the century or the death of the century. It’s this idea in modernism that at the turn of the 19th into the 20th-century modern society and our ideas of what being a human meant were completely changed because of industrialization, globalization and the rise of WWI in 1914. A lot of modernist literature from the authors of James Joyce, Oscar Wilde, Virginia Woolf, Wilfred Owen and others are about redefining identity in this new infrastructure of society.”

What concerned Ferguson was the discrepancy in the attention given to different authors’ identities and how several authors who did have queer relationships or wrote about those topics were underexamined and underrepresented in his classes.

“[When] we got to Virginia Woolf and Wilfred Owen and while we talked a little about their lives … we never talked about the fact that both of those people identify in the LGBT community. That really frustrated me because so much of those two author’s work have queer subtext in them,” he explained. “So I approached Laura Cowan about it and she was very receptive to me being upset that these queer author’s identities weren’t being put into the curriculum. And when I saw that the MHC was offering a fellowship for a research project involving the humanities I knew I needed to pursue this look at how queer identities have been erased and also why it’s important for them to be included in academia.”

Ferguson’s work surrounded the texts of Virginia Woolf including “Mrs. Dallaway,” “To The Lighthouse” and “Orlando,” as well as the poems of Wilfred Owen and how queer language and themes occurred in their work. But Ferguson is also concerned with how queer identity can become more included in curricula to make learning better for students. For Ferguson, letting queer identity be discussed is essential for allowing more students to have texts and works to relate with.

“Even just the slight indication that these authors might be queer opened up so many academic doors for me,” Ferguson said. “It pushed me to do this research; it inspired me to apply for this McGillicuddy Fellowship. Even just acknowledging this identity can open a lot of doors for students who don’t feel seen because they identify in the queer community. Or even educators who want to give a broader scope and understanding of what, for example, modernist literature is actually like.”