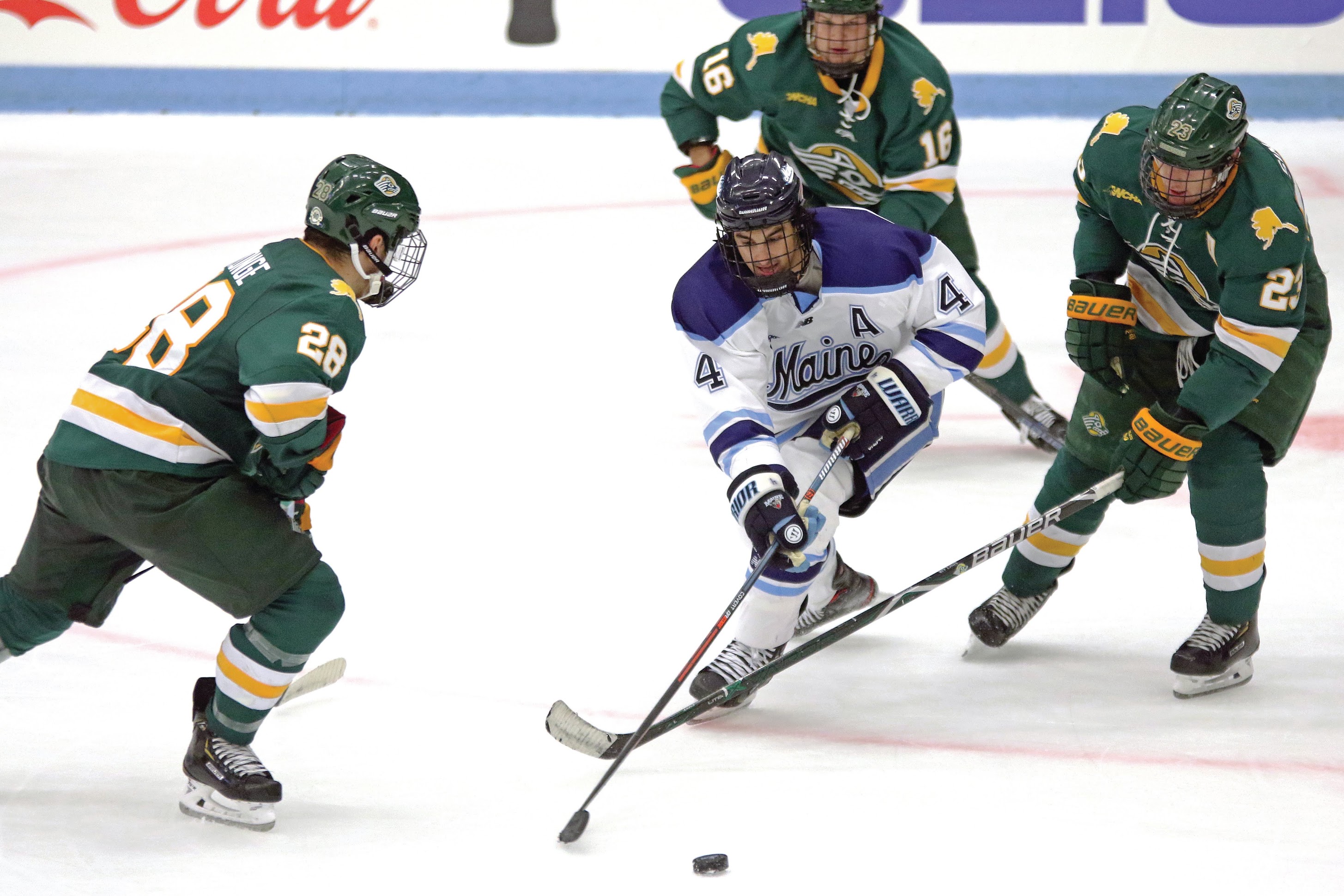 The University of Maine men’s ice hockey team defeated the St. Lawrence University Saints, 5-2, on Friday, Nov. 29. The two squads skated through a scoreless first period. Both goaltenders turned away eight shots, while Maine had two power-play chances to St. Lawrence’s one.

On a five-minute penalty kill in the second period, fourth-year forward Samuel Rennaker played the puck ahead to a streaking fourth-year forward Ryan Smith. Smith juked out the St. Lawrence defender on him, leaving nothing but open ice and the opposing goaltender in front of him. After burying the puck glove-side on St. Lawrence’s second-year goaltender Emil Zetterquist, Maine snagged the 1-0 lead late in the second period.

The Saints, not ready to head into the intermission with a goose egg on the board, were afforded a golden opportunity as Maine’s third-year forward Eduard Tralmaks sat in the sin bin for a major kneeing penalty. With five minutes of advantage, the Saints’ lines went to work. With less than a minute left on the power play chance, the Saints’ second-year forward Zach Risteau took the feed from first-year forward Jordan Steinmetz, burying the puck stick-side on Maine’s third-year goaltender Jeremy Swayman.

Skating back on after the intermission, Maine roared out of the gate with intensity. With both teams having a member riding the pine, a four-on-four started the final period of action. Lighting the lamp first for Maine, second-year forward Jakub Sirota corraled a deflected shot from second-year forward Jacob Schmidt-Svejstrupput and dished it off to first-year forward Ben Poisson. Poisson one-timed the shot and buried it behind a recovering Zetterquist from the right point.

From there, the Saints began a scramble on offense, but their frantic play cost them heavily on the back end. With a streaking Tralmaks taking the puck up the ice, second-year forward Adam Dawe slyly skated to goaltender Zetterquist’s weak side. Tralmaks, who could have easily fired a wrister at Zetterquist, made the savvy veteran play and dumped the puck off to Dawe, who buried the easy goal, putting Maine up 3-1.

St. Lawrence couldn’t buy a goal in the Black Bears’ zone for much of the period, and their turnovers proved to be costly. UMaine’s fourth-year forward Mitchell Fossier gathered the loose puck on a Saints’ rebound and streaked down the ice with Tralmaks ahead. Fossier sent a shot ahead, which Tralmaks tipped with his stick, sliding just underneath Zetterquist’s left thigh pad. The Saints did manage to rally for another score as third-year defenseman Bo Hanson cut the deficit to 4-2 with three minutes left in regulation. Hanson snuck deep into the zone on the weak side, and, after collecting a pass from Risteau, beat Swayman just inside the post with a wrister from the circle. To ice away the victory for Maine, Smith picked up his second goal of the game with 20 seconds left, firing a snipe on the Saints’ empty goal and ending the game with a final score of 5-2. Swayman ended with 28 saves for the Black Bears, and Maine had 34 shots on goal.

On Saturday, Nov. 30 the University of Maine men’s ice hockey team tied the St. Lawrence Saints, 1-1, moving Maine to 8-5-3 on the season.

In the first period, Hanson made a play for the Saints at the blue line to keep the puck in the offensive zone and sent second-year forward Carson Dimoff and third-year forward Jacob Nielsen into a 2-on-2. Dimoff then hit Nielsen with a cross-crease backhand pass for a one-time finish, giving St. Lawrence a 1-0 lead. Both goaltenders played like true stalwarts throughout the second period as the score did not change in the middle frame. Maine got a bounce deep in the slot after Fossier’s shot hit traffic in front, but the Saints were all focused on the puck, leaving fourth-year defenseman Tim Doherty wide open on the right circle for a quick pass and finish to tie the game up at one with five minutes remaining in regulation. Both teams could not find the back of the net late in the third or the overtime period. Swayman finished with 21 saves while the Black Bears recorded 37 shots on goal.

Amherst wasted little time getting things going as third-year forward Oliver Chau sniped his second goal of the season over Swayman to put the Minutemen up 1-0 five minutes into the contest. Chau fired the shot off of an outlet feed from fourth-year defensemen Jake McLaughlin. Second-year forward Bobby Trivigno doubled the lead just one minute later, tapping home a cross-ice pass from third-year forward John Leonard on a 2-on-1.

Second-year defensemen Marc del Gaizo scored the third goal for the Minutemen in the first period during a 6-on-4 man opportunity. Third-year forward Mitchell Chaffee and second-year forward Anthony Del Gaizo were credited with the assists on the goal. Coming out of the intermission, Amherst picked right up where it left off with second-year defensemen Ty Farmer finding the back of the net just 16 seconds into the frame off assists from McLaughlin and Chau.

Maine found the back of the net with two minutes left in the second, bringing the score 4-1.

Schmidt-Svejstrup scored off of an offensive zone faceoff win as the Black Bears were beginning a 5-on-3 power-play opportunity. Dawe and Tralmaks both picked up an assist. Third-year forward John Leanord scored the final goal of the night for the Minutemen with about three minutes left in the Hockey East contest. Swayman finished with 37 saves while the Black Bears only had 21 shots on goal.

The first period started out scoreless, with Swayman stopping 12 of 12 shots against him, while Maine’s offense could only generate five shots on goal. Amherst broke the 0-0 tie halfway through the second period with Chaffee scoring on the weak side of Maine’s net. Amherst extended the lead to two on the powerplay in the second period when fourth-year forward John Leonard slapped one home.

Just 18 seconds after the power-play goal, fourth-year forward Niko Hildenbrand scored his team’s third goal of the period. Third-year forward Jake Gaudet drew the attention of the Black Bears, which left Hildenbrand alone next to Swayman. Through two periods, Amherst had mounted a 3-0 advantage.

In the third period, Maine looked to start a comeback, as Dawe knocked home the lone tally of the night for the Black Bears four minutes into the third. First-year defensemen Levi Kleiboer and fourth-year forward Mitchell Fossier were credited with the assists on the goal, with Kleiboer giving Dawe a clean feed to the net. Amherst would get one more goal on an empty-net, putting their 4-1 lead too far out of reach for Maine as the final minutes of the fourth period ticked away. Swayman ended with 30 saves while Maine tallied only 24 shots.

The Black Bears will return to action Tuesday, Dec. 10 against Yale, with the puck drop scheduled for 7:00 p.m.

Editorial: Racial considerations in the language used around mass shootings are vital
The student debt crisis is a mess, and Betsy DeVos wants someone else to clean it up