UMaine after dark: campus can increase safety with better lighting 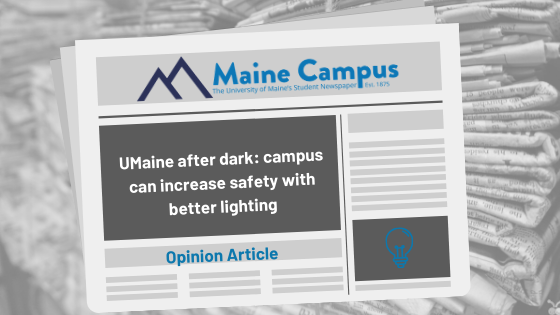 A short two or three-minute walk around campus during the day isn’t really a big deal. It might be a little cold or rainy, maybe a bit windy, but overall you’re not walking that far and there isn’t a lot that could go wrong. But if you wait a few hours for sunset, which is starting now at just before 4 p.m., it’s a whole different ball game. The University of Maine isn’t taking safety quite as seriously as it should.

There are only 473 lamp poles that light the 660 acres of the UMaine campus. The UMaine online Campus Overview includes other UMaine associated places such as the experimental forests, Witter Farm, and the University Park that increases UMaine’s size to 1,690 acres. These additional acres are just as in the dark, if not more than the primary 660 acres of UMaine.

Even if all of the lamp posts were located on the primary campus, that’s a single light for every 1.5 acres of campus.

Step back outside again for that short three-minute walk. Say it’s 7 p.m. and it’s nice out, a good night for a walk. It’s easy to notice dark spots on the sidewalks, many of which are flush with the roadway. The Cloke Plaza area, behind the East Annex, is almost completely dark. A campus that is as dark as this one is isn’t safe. There are plenty of students and staff that don’t feel safe walking around on their own after dark. In fact, UMaine students have taken action and started a petition to ask the university and UMPD to address the issue.

“It has become apparent to a large group of students and faculty that this problem has been ignored for an extended period of time,” the petition states. “There are many parts of campus that have limited, if not any lighting throughout, pathways are ill-lit and appear unsafe to the general eye.”

But that’s not all. The campus is dotted with the bright blue lights of emergency callboxes, designed to provide immediate assistance to students in need of law enforcement or emergency help. UMaine students are told that they will have at least two of these blue lights in view anywhere on campus, but that short three-minute walk proves the opposite. There are many points on campus that are not just poorly lit but well out of view of the emergency callboxes. According to UMPD’s Annual Security and Fire Safety Report, sexual assault cases have more than doubled since this time last year. The scarcity of street lights and emergency callboxes on campus makes this number even more concerning, raising the issue that a student in a dangerous situation might not be able to get the immediate help they need.

The University of Maine earns tens of millions of dollars in revenue each year. The school has valued its own lighting system alone at $4.6 million. Adding a few sorely needed lampposts and callboxes is by no means an outlandish request. It isn’t much of a sacrifice for the university to spend a little money on improving the safety of the campus and its students. With a few more blue and white lights UMaine might be a whole lot safer.

The student debt crisis is a mess, and Betsy DeVos wants someone else to clean it up
Maine splits weekend series with Dartmouth College, gets swept by Vermont