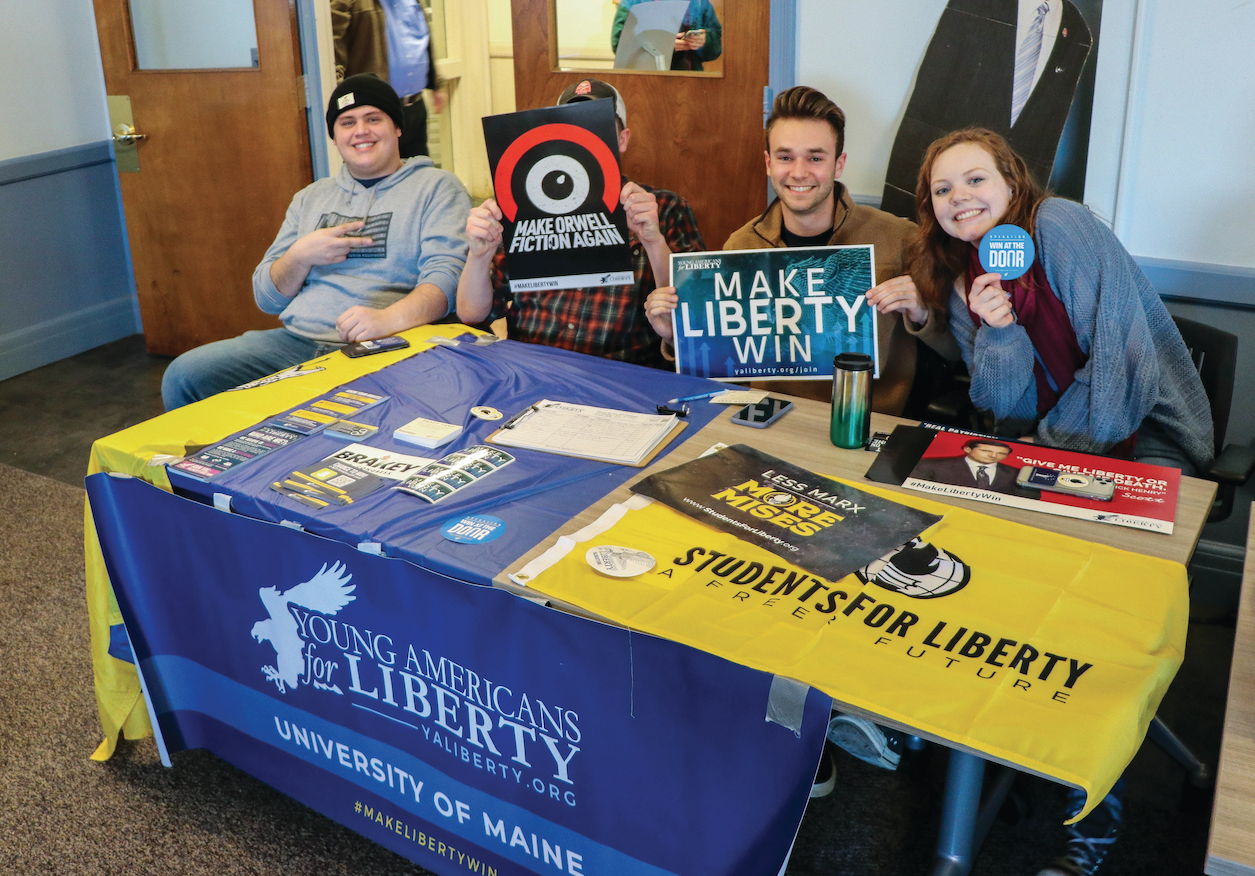 Since the 2016 election, tensions between political parties have risen and divided the nation and even smaller communities like the student body at the University of Maine. After President Donald Trump was sworn into office, it became difficult for members of both parties to find common ground on issues such as health care, immigration and gun control. This has polarized political ideologies and expression in communities around the nation.

However, a new student-led organization has arisen out of the contention between the Democratic and Republican ideologies on the UMaine campus. After the socially and politically tumultuous autumn of 2019, the Young Americans of Liberty (YAL) created a chapter at UMaine in October. Since then, the group has been working hard around campus and in the Orono area to raise awareness of their organization and their beliefs.

The YAL is an organization with the goal of promoting and protecting student liberties. It is overseen by Dylan Oliver, a third-year business management and economics student, Jack Wolfenden, a second-year forestry student and Matthew DelMonico, a second-year history student. The current group at UMaine is a chapter of the national Young Americans for Liberty Foundation, a non-profit organization that seeks to “recognize the natural rights of life, liberty, and property” as outlined in the Constitution. The student organization works to educate students about their rights, with a focus on first amendment rights. They are hoping to work with the UMaine faculty and administration to create a more transparent free speech policy, while advocating for students’ rights to peacefully protest.

Oliver, the president of the organization, said that he feels as though there is a lot of misinformation about the group in the student community. He hopes to advertise that the group is not an alternative to conservative groups on campus, such as Turning Point USA and the group formerly known as the UMaine College Republicans.

“A large amount of the student body misunderstands [our mission], we get grouped in with one side or the other [in terms of political affiliation]. In terms of ideology, we welcome a very diverse group of people from various political backgrounds. Some of our members identify as libertarian, some identify as Democrats … some identify under third-party demographics such as the Green Party. We hope to isolate ourselves from party politics and [rather] anchor ourselves with common ground … that common ground is to promote liberty,” Oliver said. “We hope to, we can and we will work to bridge as many different cultures as possible. Everybody gets liberty, we promote liberty for all … by doing that we can promote [a] cultural impact.”

Wolfenden, the organization’s vice president said that he feels strongly about giving everyone the opportunity to voice their opinions. He hopes that the group will be able to reach more people in order to help spread the stories of people from varying walks of life.

“The law of the land, the law of liberty, applies to all. [We hope] to amplify the voices of those who may not be heard, we want to hear from the people who are from different perspectives [and help them feel] as though their voice is being heard,” Wolfenden said. “We are all Americans, we might come from different backgrounds, but at the end of the day, we are all citizens of this nation and we want to work to better this nation.”

One of the organization’s biggest goals for their interaction with the UMaine community is to promote open dialogue, rather than debates about which political ideology is the best or the most effective.

“We know that there are groups who feel debate is positive, we don’t really agree that a debate is a positive way to …. sit down and find common ground. With debates, there’s always a winner or a loser. We hope to be able to host more round-table and town-hall types of discussions [about today’s issues],” Oliver noted. The group hopes to host discussions with local politicians who share their values of liberty for all, and their goal is to open a discussion about hard topics that are often avoided in political campaigns.

“We are hosting Eric Brakey this spring, [we hope] it will be a more casual discussion with a politician,” Oliver said. “We need to hold our politicians to the same standards we hold our neighbors, [not as] this image they project [on capitol hill].”

The most important goal that the organization hopes to achieve in the spring semester is working with the UMaine faculty to create a more transparent set of expectations that deal with students’ right to freedom of speech. Currently, the school has policies surrounding organized protest that YAL feel are restrictive and inaccessible to everyone.

“Currently, you have to talk to the chief of police 48 hours in advance of an event that you plan to protest. [Frankly] we feel as though it is prohibitive to a lot of the members of the student body. As long as it doesn’t disturb the peace, it’s a peaceful protest … we shouldn’t have to seek approval [to exercise our rights],” Wolfenden said. “If I want to go stand on the mall, I should be able to. I’m not hurting anybody. We want to work towards an open dialogue on campus about these issues.”