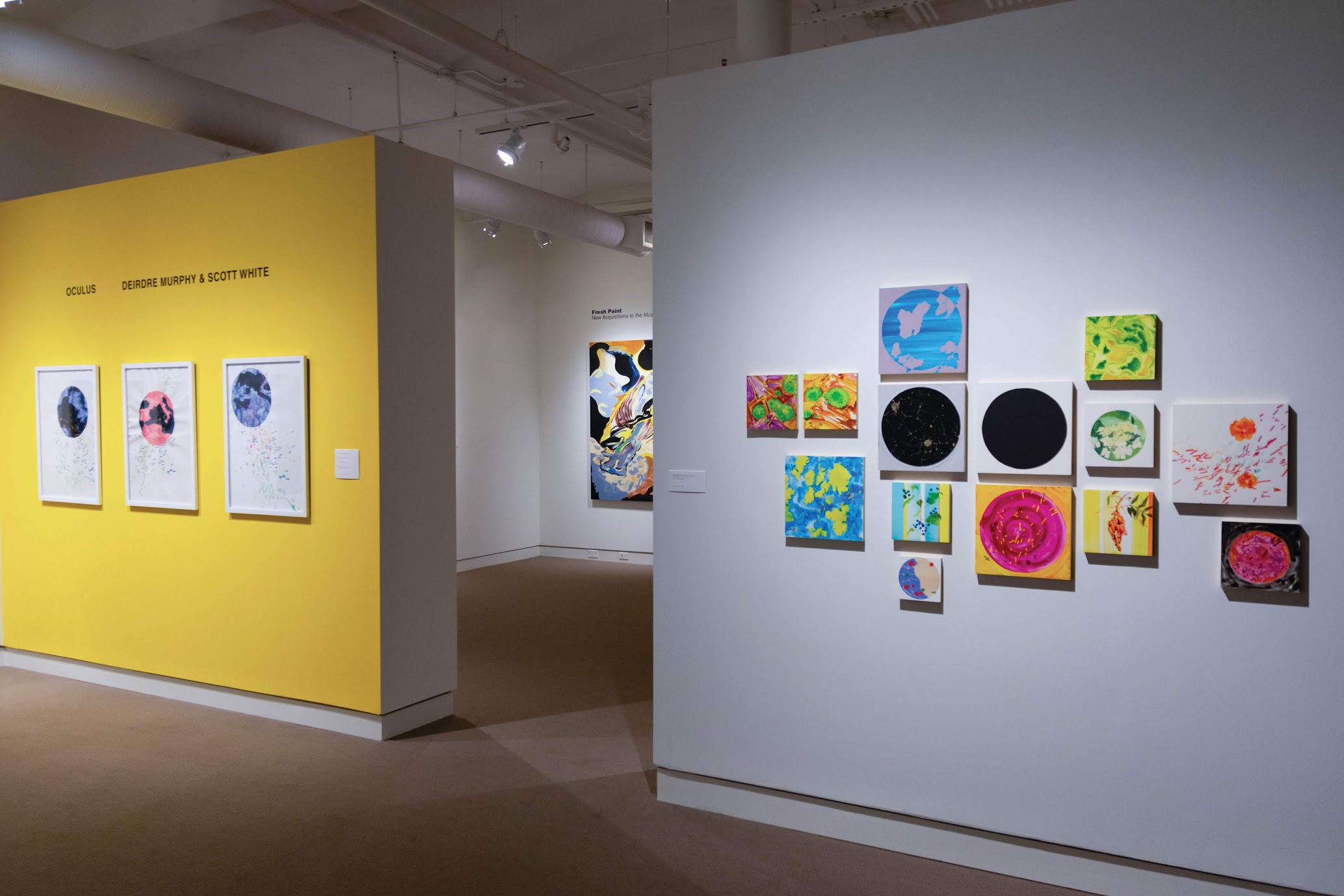 The University of Maine Museum of Art 2020 Winter Exhibition in downtown Bangor features the collections by various artists. The new acquisitions will be added to the museum collection. The collections are on display through May 2, 2020. Photo by Brenden Ward

Located at 40 Harlow St. in downtown Bangor, the University of Maine Museum of Art (UMMA) has opened four new exhibits for its winter season. The exhibits feature artists from across the United States, and the open space of the museum showcases a variety of visual art, from acrylic and oil on canvas to an LED-illuminated stainless steel display, tucked behind curtains as part of Deidre Murphy & Scott White’s “Oculus” exhibit.

The exhibits each season are chosen by George Kinghorn, the executive director and curator at UMMA, and the museum boasts the honor of being Maine’s “only collecting institution devoted solely to exhibiting and collecting contemporary art,” according to the museum’s website.

“Rhythm from Within” is the first exhibit that one will encounter upon entering the museum, and it consists of a series of unique greyscale photographs by Michael Philip Manheim. Manheim, a professional photographer since 1969, has been featured in exhibits worldwide, including Germany, Greece and Italy; his photography is also held in collections throughout the United States, perhaps most notably in the Library of Congress and the International Photography Hall of Fame.

Manheim’s exhibit seeks a new approach to still photography. The collection uses in-camera multiple exposures and displays the movement of human beings, specifically aiming to capture the ability of professional dancers to physically express their emotions. Out of the four winter exhibits at UMMA, “Rhythm from Within” is the only one that utilizes only black and white imagery.

Teresa Dunn’s “Cover the Waterfront” is a stark contrast to the work of Manheim, as visitors to the museum will exit Manheim’s black-and-white photography display and enter a world of color. Raised in Southern Illinois, Dunn is a Mexican-American artist and uses her dual-heritage identity as an influence and inspiration for her art. Dunn utilizes color, space and light to tell stories in her art, particularly stories of the contradictory tensions of her identity. “Cover the Waterfront” features several circular oil and flash compositions on paper and panel. Dunn’s exhibit cites the circles as symbols of contradiction, representing “isolation and belonging, loneliness and solitude, internal conflict, journey, the difference between home and homeland.” The paintings in the exhibit create a fictional environment that shows the world of a female protagonist and her associates on an island, and, with the content of each piece, the viewer is left to contemplate the meaning and how it fits into the larger story that the display tells.

The next exhibit featured is “Oculus,” by Deidre Murphy & Scott White, a married couple of artists that collaborated to create this collection. “Oculus” consists of a series of paintings by Murphy and a series of wall-based sculptures by White, with the two combining to exhibit the artists’ pondering on the relationship between art and scientific discovery. Three of the pieces, together called “Phosphorescence,” represent a series of Petri dishes used by scientists. The exhibit shows science through art and art through science, with some pieces giving a microscopic perspective while others zoom out to a macroscopic level. White’s work pairs perfectly with Murphys to create a dynamic exhibit, using his sculptures to address issues such as the effect of pollution and climate change on animals and nature. A unique twist on the connection between art and science, his display “Ursa Major” can only be viewed by entering a closed section of the exhibit, protected by black curtains. Inside, White has created two smooth, domed fixtures, facing each other on opposite walls of the pitch-black room, and both are lit from behind with color-changing LED lights, “meant to re-contextualize the phenomenological events we see in the night sky,” the exhibit description explains. Together, Murphy and White have created a fascinating union between science and art.

“Fresh Paint” is the fourth of the museum’s winter exhibits, featuring art from 21 different artists that have been given to or purchased by the museum over the past four years. Each piece is unique; there are landscape pieces, sculptures, abstract pieces and more. The museum reviews pieces periodically as considerations for future displays, and Director and Curator Kingham is the sole decision-maker for which pieces make it into the museum. To submit pieces, artists must send a cover letter, resume, artist statement and photos of their art for consideration. The Museum receives a high volume of art regularly as submissions.

A light, open and modern display, the UMMA has been in downtown Bangor since 2002, where it thrives as an expansion of the University of Maine community. The winter exhibits will be on display until May 2, 2020. Entry to the museum is free, and a schedule of events (from educational programs to trivia and entertainment) is available on the museum’s website, umma.umaine.edu.