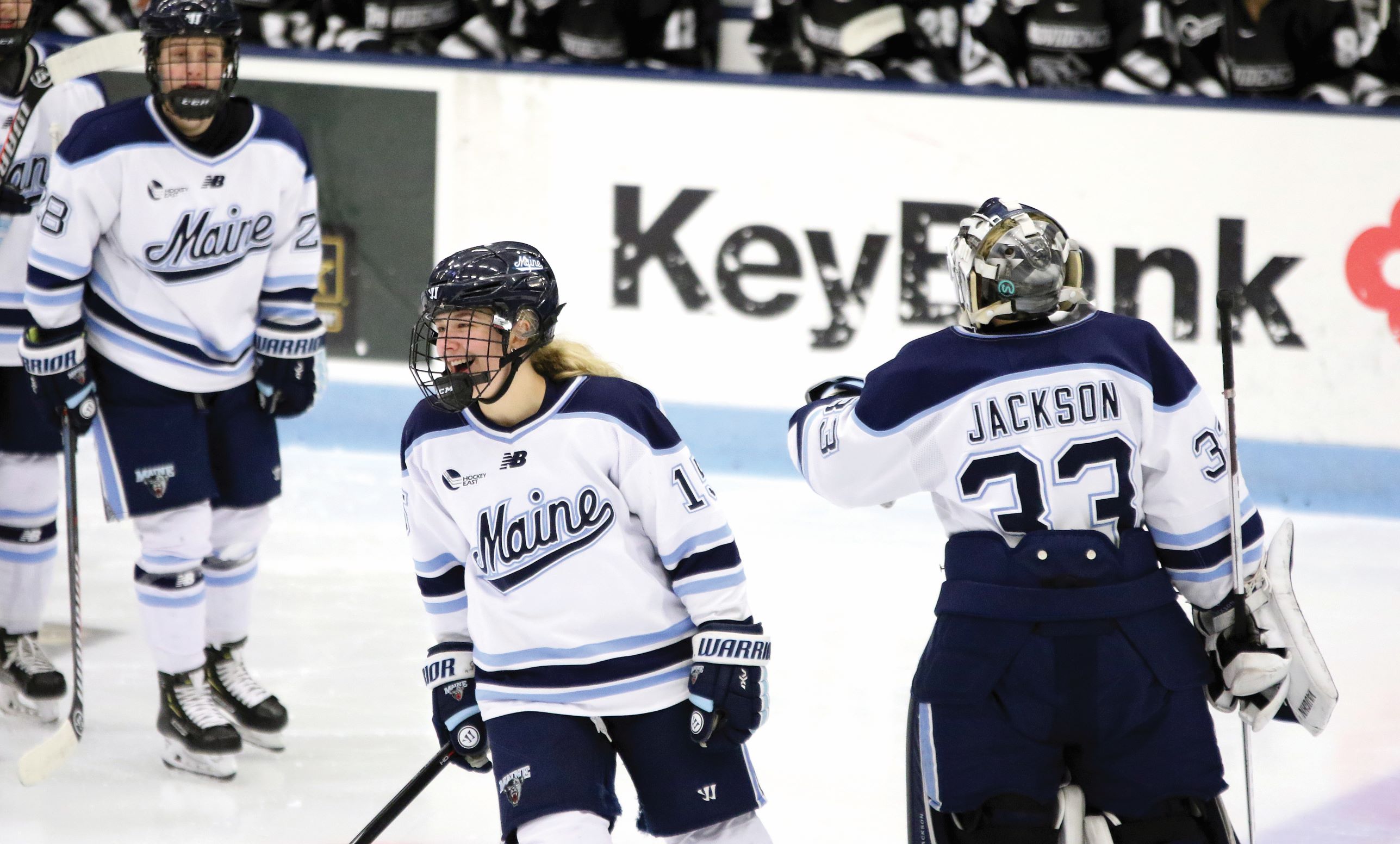 The University of Maine women’s ice hockey team fell in overtime to the No. 8 Boston University Terriers in game one of a weekend series on Friday, Jan. 4. The Terriers started fast out of the gate, getting the first goal of the game just five minutes into the period. The Terriers extended the lead to 2-0 with just under two minutes to play in the first period as they skated into intermission with all the momentum. In the second period, fourth-year goalie Carly Jackson kept the Black Bears in the game, making 17 saves and keeping the Terriers off the scoreboard. Third-year forward Michelle Weis scored her second goal of the season to cut Maine’s deficit to 2-1. With less than seven minutes remaining in the game, second-year forward Celine Tedenby blocked a shot in her own end and took it coast-to-coast to tie the game at two. The game was forced to go to overtime where the Terriers took advantage of the extra time and scored with less than three minutes left in the frame. Jackson made 36 saves on 39 shots while Maine had 29 shots on goal.

The University of Maine women’s ice hockey team tied the Terriers 3-3 in the second game of the weekend. The first period had the Black Bears scoring three times and the Terriers scoring once. Unlike Friday night’s game, Maine’s offense got going in a hurry. Second-year forward Liga Miljone started off the scoring by getting her sixth goal of the season, putting Maine up 1-0. Second-year defender Ida Press fired a slap shot from the blue line to make it 2-0 favoring Maine early in the first period. Under a minute later, the Black Bears would increase their lead to 3-0 as Weis scored her third goal of the season. The Terriers answered back with one of their own at the end of the first period to cut the lead to 3-1. BU found the back of the net in the sixth minute of the third period as Maine’s lead was cut to 3-2. On the powerplay, the Terriers found the equalizer to tie the game at three with 10 minutes left in the game. The game would require overtime for the second time on the weekend, this time with it ending in a 3-3 tie. Jackson finished with 32 saves with Maine only attempting 17 shots on goal.

On Friday, Jan. 10, the Black Bears skated away with a 4-2 over the Holy Cross Crusaders in the first game of the weekend series. The first period was a defensive battle. Maine took 19 shots in the first period but could not get one past the Crusaders’ goalie. For Maine, Jackson stopped all 10 shots she was faced with. Maine broke the game wide open by scoring three times in the second period. Weis continues to light the lamp for the Black Bears, finding the back of the net first for Maine followed by Miljone scoring her seventh of the season and doubling Maine’s lead shortly thereafter. The third goal of the period was scored by fourth-year forward Brittany Colton which was her fourth goal of the season. In the third period, the Crusaders cut the lead from 3-0 to 3-2 with two goals to help bring them back in the game. Maine would finish off the Crusaders when second-year forward Ali Beltz scored an empty-net goal with 24 seconds left in the game to help Maine pick up the 4-2 win.

On Saturday, Jan. 11, Maine tied Holy Cross 0-0 in the second game of the weekend series. Neither team could get the puck past the opposing team’s goalie in the scoreless Hockey East match. Jackson made 21 saves and picked up her third shutout of the season. Maine took 40 shots on goal but could not find the back of the net.

Maine tied the Merrimack Warriors 1-1 on Friday, Jan. 17. The first period had the Warriors striking first as they got a takeaway and went coast-to-coast to score. Early in the second period, Maine tied it up when Tedenby went coast-to-coast and buried it behind the Warriors’ goalkeeper. In overtime, both teams had opportunities to win the game but neither could find the back of the net as game one of the weekend series ended in a 1-1 tie.

The second game of the two-game series started out the same as the first game, as the Warriors collected the first goal of the game and the lone tally in the first period. The second period was a back and forth battle between the two teams as the Warriors carried their 1-0 lead into the second intermission. Maine would tie the game up as first-year forward Ida Kuoppala picked up her ninth goal of the season for the Black Bears. Kuoppala wasn’t done there as she continued on to score the game-winning goal with eight minutes remaining in the period. Her 10th goal of the season came on a short-handed situation where she corralled in the loose puck in front of the net. Jackson would pick up the win, her seventh of the season and 40th of her career, finishing with 25 saves while Maine took 47 shots on goal.

Maine fell to the University of Connecticut Huskies 2-1. Third-year forward Savannah Bouzide put Connecticut on the board first after lighting the lamp in the ninth minute. The Huskies’ defensive pressure led to a Maine turnover. The puck was scooped up by fourth-year defender Tristyn Svetek before she dished it off to second-year forward Danielle Fox. Fox sent a quick pass ahead to Bouzide, and she slotted one into the bottom right corner to give the Huskies a 1-0 lead. Connecticut took the lead into the first intermission. Maine broke through and tied the game at the 14-minute mark of the second period, as Kuoppala was able to snipe a high-arching shot into the top left corner. Maine continued to be aggressive in the third period as they held an 11-5 shot advantage, but the Huskies were the ones to break the 1-1 tie. Fox snuck a backhand past Jackson to take the lead with 10 minutes left in the game. The Huskies held on to beat the Black Bears in game one of the weekend series. Jackson had 21 saves on 23 shots while Maine racked up 27 shots on goal.

In the second match-up against Connecticut on Saturday evening, Maine fell to the Huskies 5-2. The Huskies found the back of the net first, as second-year forward Viki Harkness scored her fifth goal of the season to get the early advantage. Just 18 seconds later, Maine answered as Tedenby netted her seventh goal of the season to tie the game at one. Third-year defender Taylor Wabick for the Huskies scored as she deflected the puck into the back of the net. The second period was very similar to the first period as Connecticut came out and netted the first two goals of the period and extended their lead to 4-1. Fourth-year forward Catherine Crawley scored twice for the Huskies in the second period, collecting her ninth and 10th goals of the season. Maine closed the gap to 4-2 when Kuoppala netted her 12th goal of the season on the powerplay. In the third period, Connecticut put the game out of reach by scoring their fifth goal of the night. Jackson made 16 saves on 21 shots and Maine tallied 16 shots on goal. Maine falls to 10-12-5 on the season and 6-10-4 in Hockey East play.

The Black Bears will return to their home ice where they will take on the University of New Hampshire Wildcats on Friday, Jan. 31 and Saturday, Feb. 1. Both games are scheduled to begin at 2 pm.