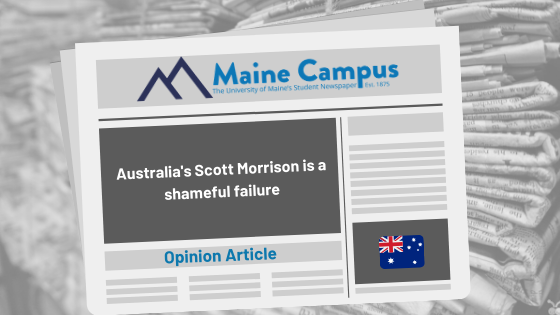 When the bushfires in Australia first began, many Australian citizens realized the gravity of the situation and knew the effects they would have. Many have volunteered their time and efforts to become wildland firefighters, the first line of defense in saving homes and families, and wildlife from bush fires. The fires now over 19,000 square miles, an area twice the size of Vermont. But it seems Australia’s prime minister, Scott Morrison, hasn’t given the situation the same attention the rest of his own citizens have.

Prime Minister Morrison has made many regrettable decisions in the face of his country’s hellish suffering, and the Australian public is acutely aware of it. After Morrison’s poorly-timed trip to Hawaii at the height of the fires, missing person posters of the prime minister appeared in cities, accusing him of abandoning the country in an hour of need. Morrison has displayed a total disconnect from the terrible reality afflicting his country. During a visit to Kangaroo Island, off the coast of Adelaide, Morrison expressed his gratitude that nobody had lost their lives. When a nearby local corrected him and told the press that there had been two deaths, Morrison backpedaled, saying he was referring to the local firefighters. He had to be corrected again, as the father-son pair that had been caught in the blaze were returning from fighting a nearby fire.

Locals also told reporters that Morrison had called on the nation’s tourists to continue vacationing. Videos online show firefighters berating the prime minister to journalists, and many have expressed their concern that the government is not protecting them. Morrison has ignored requests for meetings with firefighters, referred to the bushfires as “the new normal,” and pushed for more coal power as the country turned to ash around him. Australia’s bushfires are quickly becoming a prime example of a disaster caused by climate change, where the man in charge refuses to take responsibility.

The problem is bigger than just a disconnect. Morrison also has ties to the coal industry, and was carried to a surprise victory by the coal-mining district of Queensland. As soon as his electoral victory was announced, he approved slashes to a program laid in place by the last administration to reduce dependency on fossil fuels. During his tenure as Australia’s treasurer, the nation exported more coal than any other country in the world. At one point, he brought a chunk of coal into Parliament, presenting it as a harmless energy source. He conveniently forgot to mention that he had to have the chunk varnished to prevent it from dirtying his hands.

In November of last year, Morrison threatened to make climate activism illegal in response to protests at a mining conference. At the funeral of a firefighter, Morrison called the bushfires “natural disasters” that could not be controlled, though the response to it can. It’s ironic that Morrison is in charge of the response and hasn’t been controlling much of anything.

Scott Morrison is a failure. He is at least partially responsible for the fire-related deaths of 33 people, including three American wildland firefighters who died in a water bomber crash. He has made it clear that he prefers money over the lives of the people he’s supposed to care for, he blatantly refuses to discuss the apocalyptic issues his nation faces, and he’d rather outlaw free speech than hear criticisms of his response to the fires. He does not deserve to hold the title of prime minister and should be ashamed of the way he has abused the power he has been granted.