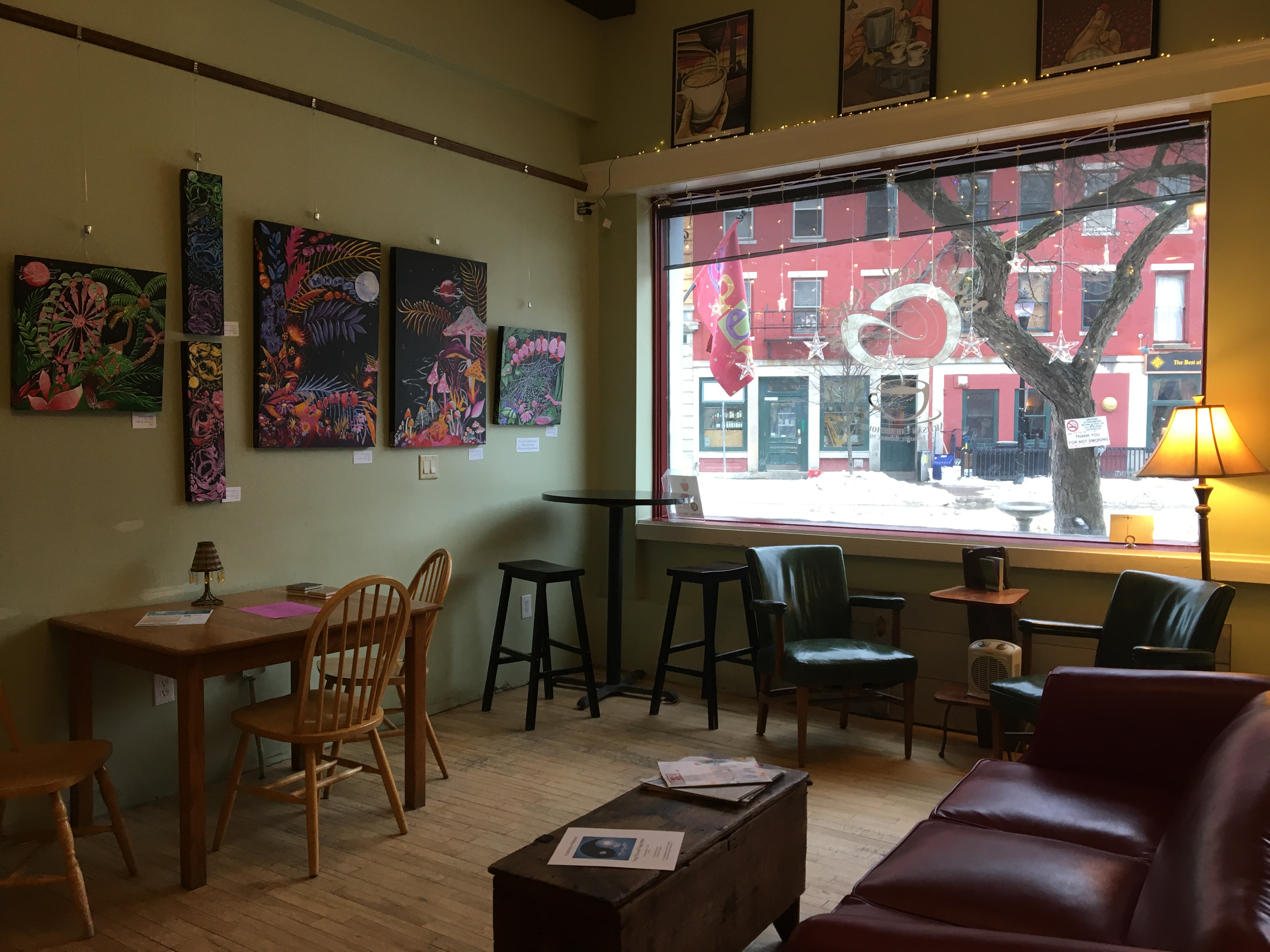 The West Market Square Artisan Coffeehouse, located in downtown Bangor, is an ideal place for coffees, dates, and the occasional story slam.

Mark your calendars for March 6, because West Market Square Artisan Coffeehouse in Bangor will be hosting one of their regular story slam events, occurring on the first Friday of every month, beginning at 6:30 p.m. This month’s theme is “Food Fiasco,” where anyone can share a crazy tale about food, ranging from how you actually found a fly in your soup to a terrible event at your waitressing job.

At West Market Square, story slam attendees arrive around 6:30, grab their drinks and take a seat on one of the couches or tables around the shop.

“Generally, what tends to happen is people want to be warmed up, so we usually have a couple regulars that come and get up and give a couple slams … if needed, our MC, Blaine Shaw, warms the audience as they go along — he’s fantastic. Usually, though, as each person gets up and tells a story, it gives courage to the next person. We don’t put names in a hat as a rule — we just let people raise their hands,” shop owner Cheryl Michaud says.

Attendees will share a total of eight to 10 stories a night when there are robust crowds. The slams are open to people of all ages, though the audience tends to be comprised of people between 18 and 50 years of age, making this the perfect event for college-aged students looking for a fun night out or a venue in which to perform.

Once all the stories have been told, a panel of judges reviews the stories based on criteria traditionally followed by story slams, but, since it’s a casual event, it isn’t as difficult as one may think. The winning story receives a $25 Buoy Local gift card underwritten by Bangor Savings Bank that can be used at most local businesses in Bangor.

“[We judge on] just a few things: How you connect to the audience, that could be how you made them happy, made them sad; presentation, if it’s hard to hear you, [it] makes it hard to connect with the story; and the story itself, how it hits people. We usually have Blaine Shaw and one other person [as judges], though people volunteer. You have to stay within five minutes, but Blaine takes some liberties as long as it’s under seven,” Michaud says.

Currently, West Market Square is going on two years of hosting story slams, originally starting as a part of the downtown Bangor New Year’s Eve Celebration and Winterfest with the intent of bringing the local community in to gather, share and enjoy a quality cup of coffee.

Along with hosting slam every first Friday of the month, West Market Square holds additional slams for groups who want a venue, such as Equality Maine during Bangor Pride Week, and the Mabel Wadsworth Center for a closer, more intimate storytelling event. Michaud also says groups at the University of Maine would be more than welcome to reach out and plan similar events at the coffeehouse.

As for upcoming events, West Market Square is having a “Swipe Right: Cookies and Couples” event extending through the month of February, where if you’re on a first date and you let one of the baristas know, you and your date get two free cookies with your drinks. On Feb. 29 from 9-10 a.m., the shop will host a coffee tasting and pour-over demonstration free to the public, followed by a psychic reading by Amy Burgoyne, where it’s $10 for a 10-minute psychic reading along with a cup of coffee or tea.

If you’re interested in following West Market Square Artisan Coffeehouse for upcoming events, deals and coffee tips and tricks, you can find them at @WestMarketSquareArtisanCoffeehouse on both Facebook and Instagram.