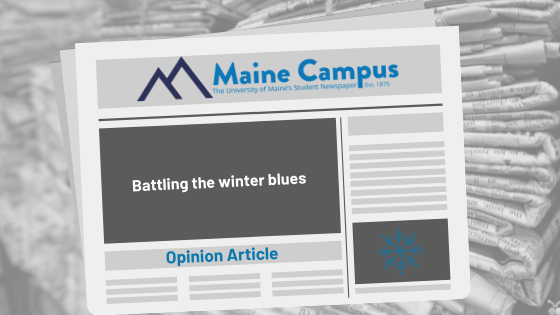 Seasonal Affective Disorder (SAD) is a syndrome characterized by recurrent depressions that occur annually at the same time each year. Studies done by doctors affiliated with the Clinical Psychobiology Branch show that those who have already been diagnosed with bipolar II have a higher risk of developing SAD. Also known as the “winter blues,” this is estimated to affect 10 million adults each year, with symptoms ranging from mild to severe. However, even if there is no previous history of depression or mental illness present, anyone can experience the effect of SAD, especially during the winter season.

As college students, all of us have a busy lifestyle. Our days are filled with classes, homework, jobs and meetings. With the sun setting before most of us get out of class and frigid temperatures it can be difficult to be outdoors. Chloe Barnett, B.S., and Dr. Liji Thomas, M.D., have researched some simple steps that you can follow to thrive through the winter season.

One natural remedy that shows impressive results is light therapy. Light therapy is a box that is placed inside that replaces the lack of sunlight that occurs during the winter and fall months. The brightness coming from the box or lamp appears to be 20 times brighter than indoor lights. Light therapy is so effective because your body absorbs vitamin D, which is emitted from the sun, to help decrease symptoms of sadness. In a study done by researchers of biological psychiatry, one hour of light therapy a day significantly reduced SAD symptoms in 16 out of 16 patients who had been diagnosed. Vitamin D can also be consumed in pill form, and is easily accessible in local stores such as Walmart and Target.

Exercise can be beneficial to our mind and bodies, but for this particular disorder, exercising on a pedal bike for 20 minutes has been proven to have the same effect as light therapy. Physical activity also increases serotonin in your brain, which is a natural chemical used to fight depressive symptoms. It is recommended that people with SAD do not exercise in the night time due to the risk of causing an onset phase delay of melatonin, the natural chemical our bodies release to help us sleep.

Having a healthy diet and lifestyle can also prevent increased symptoms. Cutting out or lowering your intake of nicotine, caffeine and alcohol is extremely beneficial to those with SAD. Avoiding processed foods has been shown to lower symptoms due to the lack of folate that these foods contain. Consuming vegetables that include large amounts of folate is helpful because researchers show low amounts of folate intake are correlated with an increase in symptoms.

Last but not least, no one has to go through something alone. The counseling center on campus is open and there are many online resources that have a handful of remedies and options from people who have experienced SAD. Instead of studying in your dorm, go to the library, Nutting Hall or Donald Corbett Business Hall to study, as they are great places to get out and get exposed to sunlight and socialize. While in your dorm during the day, have your blinds open, as it can help you feel more outdoors if you aren’t able to go outside.

Fighting SAD is possible, and with these few helpful tips, you can soar through the winter with flying colors.