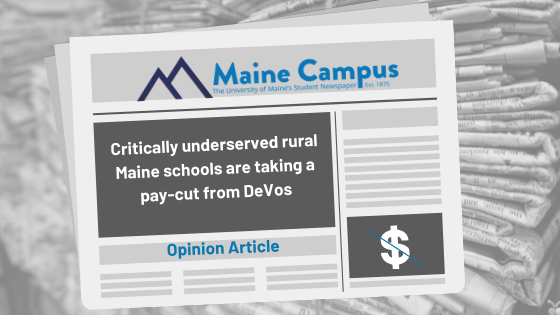 The state of Maine’s education system is experiencing a teacher shortage, so much so that state lawmakers are raising the starting salary for teachers from $30,000 to $40,000 a year to draw in young prospects as an aging workforce begins to retire. Unfortunately, in the wake of state legislators setting aside $2 million to soften the effects of the raise on tax-payers, the Department of Education has essentially cut $1.2 million in federal grant money due to Maine’s rural school districts, effectively nullifying state legislators’ efforts to rejuvenate the struggling education system.
According to the 2010 U.S. census, Maine is “the most rural state in the union,” with 67.5% of the schools considered “rural.” Despite their prominence in the state, these schools and their students face significant hurdles that other schools in more developed parts of Maine do not have to contend with. According to the 2014 research by the University of Southern Maine’s Education Policy Research Institute, rural schools often have difficulty obtaining and retaining effective teachers due to lacking cultural opportunities and social amenities. In addition, rural teachers are often paid less to do more and they often earn lower salaries due to the lower tax capacity of rural communities.
As a result of having such a limited amount of instructors, rural students aren’t offered the same variety or rigor of courses. Concerns regarding school finance, facility upkeep and paying for transportation as far as an hour or more from their schools often preoccupy administrative staff before filling out the special education program or focusing on the professional development of current staff. With state revenues to schools per local dollar being 2.4% below the national average, it is usually left to rural communities with significant financial limitations to foot the majority of the bill. Without the ability to provide competitive salaries or benefits for teachers there is little in the rural school districts to attract the best teachers.
Meanwhile, the entire state of Maine has been struggling with a shortage of teachers, especially in subjects such as math, science, world languages and special education. According to WGME, this is especially affecting rural schools which already struggle to hire a satisfactory amount of teachers. Gov. Janet Mills passed a budget last February which made room for an increase in the starting salaries for teachers from $30,000 to $40,000 over a period of three years.
Meanwhile, Secretary Betsy DeVos’ Department of Education (DOE) have changed the criteria for deciding which rural schools receive the most federal funding from the Rural Education Achievement Program (REAP), of which Maine Sen. Susan Collins was a co-creator, to relying on infrequently updated US Census data from the original reliance on statistics on free and used lunch recipients. Collin’s herself sent a letter to DeVos on February 13 expressing her opposition to the change.
This $1.2 million loss for Maine’s education system represents a significant blow to the state’s effort to rejuvenate it. Unfortunately, some administrators have expressed a degree of pessimism regarding the salary increase, even before the DOE’s change to the REAP grant criteria. According to Ellsworth native Ronald Ramsay, Superintendent of MSAD 37, experienced teachers at rural schools will be expecting raises similar to those their coworkers in entry-level positions receive, and that will end up falling on the local community to finance. Ramsay also expressed doubt regarding the pay increase’s ability to draw in more teachers to the rural communities when the more affluent districts in the state can still offer the best salaries and benefits.
It is truly mind-boggling to try and comprehend for what reason Betsy DeVos and the DOE would deprive struggling school systems of much-needed funding. The fact that a senator who co-authored the bill which put the grant program into place would be so alarmed as to publicly demand answers from the DOE for their reinterpretation of the program criteria indicates just how utterly mismanaged and out-of-touch the leadership of that department is with the best interest of public education in this country.

Photo by David Jakacky
The dirty truth about clean…

Photo by David Jakacky
The lasting effects of COVID-19:…

Photo by David Jakacky
More than just a ‘safety…