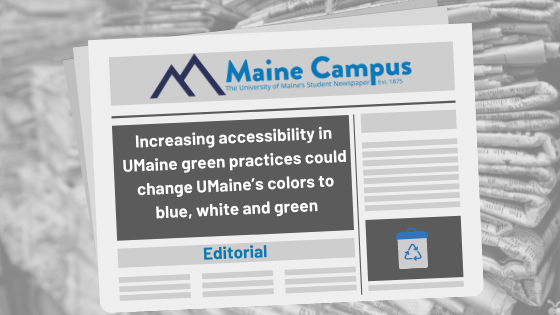 Climate change is impacting natural resources everywhere; Antarctica reached 65 degrees last week, this past January was the warmest January since record taking began; and the Australian bushfires burned for 210 days before being fully contained. The state of Maine is no stranger to these harmful effects, as the Gulf of Maine is labeled as the second most rapidly warming body of water on Earth. As a state that is economically, recreationally and socially dependent on natural resources, efforts must be made to protect it, starting at Maine’s own flagship university.

The University of Maine touts itself as a green and sustainable campus. Numerous UMaine programs such as the Green Campus Initiative, UMaine Office of Sustainability, UMaine Green Team and the Black Bear Food Guild provide beneficial and important services to the UMaine community which encourage sustainable practices. However, UMaine could continue to do more to increase the accessibility of green living for students, faculty and staff.

In 2018, UMaine was listed as 49th in Princeton Review’s annual list of Top Green Schools in the country. While this is a wonderful accomplishment, other Maine schools such as Colby, Bowdoin and Bates all made the 2019 list under the top 15 of 50 colleges. The College of the Atlantic, located in Bar Harbor, was ranked as the number one green college in America.

In 2007, the College of the Atlantic made history by becoming the first college to go carbon-neutral. Their website dictates clear sustainable policies for plastic usage, discarded resources and materials management, sustainable buildings, meat purchasing, energy frameworks, water and more.

One particular area of focus for the College of the Atlantic is its sustainable buildings. All campus buildings are equipped with wood pellet boilers, solar panels and composting efforts such as composting toilets and bins available for student and staff use. UMaine has composting efforts available, but only in dining halls, where staff compost food discarded by students. If UMaine was to implement composting services to residence halls and other campus facilities such as the Memorial Union or hallways between classrooms, it would increase accessibility to greener practices for all UMaine community members.

Green and sustainable practices work most effectively when they are accessible. For UMaine students, recycling is available in all facilities, but current pre and post-consumption food waste composting efforts require a strong personal initiative from students to collect their waste and deliver it to local facilities such as the UMaine Cooperative Extension or Orono Community Garden themselves. According to the Office of Sustainability, UMaine currently diverts over 400,000 tons of food waste to their compost systems. This is an amazing effort that contributes to helping our planet, but the waste rates could decrease exponentially with an increase in accessible sustainability practices.

UMaine could also make efforts to limit the amount of waste produced before student and staff consumption. The U.S. Environmental Protection Agency (EPA) reports that America creates 33 million tons of food waste each year, and contributes 3.6 million of those tons to American universities and colleges. This is because college and university all-you-can-eat dining policies often involve dining halls to prepare more food than what will be consumed and encourage students to take more food than they will actually eat. It’s no wonder that the EPA reports that almost 40% of America’s food waste consists of food that never made it to anyone’s plate.

Currently, UMaine offers three on-campus all-you-can-eat dining facilities, one restaurant, and one pay per item cafeteria. At UMaine’s all-you-can-eat facilities, including York, Wells and Hilltop, some sections are managed by dining hall staff who serve out measured portions of food. This practice helps to mitigate food waste, but many other food sections, such as the salad bar, “From the Grill,” cereal and sweets, sandwich bars and more are open for students to place as much as they desire on their plates. An increase in portion control monitoring or even a possible switch to pay per item cafeterias could help decrease UMaine’s food waste.

A shift to accessible composting services and effective pre-consumption monitoring efforts would allow UMaine to encourage an individualized sustainability approach for each and every student, while also strengthening their institutionalized green efforts.

In order for climate change and waste reduction efforts to be effective, they need to be sustainable. Sustainable practices are learned through institutionalized efforts and individual practices that combine forces to create the greenest outcomes possible. UMaine works hard to exist as a green campus, but more could be done to decrease the footprint we leave behind and encourage students to participate in the process.