Editorial: The line between corporate allyship and marketing shouldn’t be crossed

Home /Opinion/Editorials/Editorial: The line between corporate allyship and marketing shouldn’t be crossed 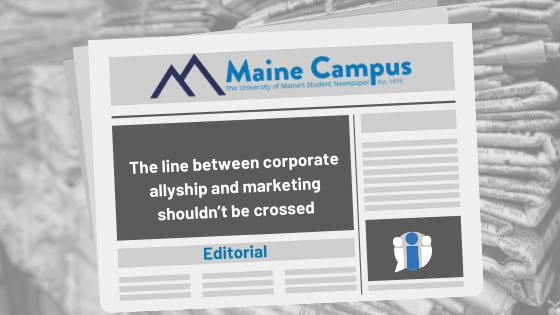 In the world of allyship for marginalized groups and marketing for companies in America’s cut-throat capitalist economy, where does allyship end and unproductive marketing begin? We are all familiar with the yearly advertising clock: a dedication to new resolutions through the first part of the year that transforms to a focus on plastering American flags all over products for the Fourth of July and finally ending on Christmas decorations and commercials that emerge before Halloween even passes. But movements such as Black History Month and Pride Month have been added to the calendar in the past few decades, opening the door for many companies to exploit people of color and LBGTQ peoples for monetary gain.

In February of 1969, a group known as Black United Students at Kent State University was the first to propose Black History Month as an opportunity to celebrate Black culture and the influence of the black and brown community on American history. Since 1976, each U.S. president has officially designated February as Black History Month, shaping it into a well-known and culturally critical month.

With this awareness comes companies and organizations who organize campaigns centered around Black History Month. In some cases, efforts are made to support black and brown children in school, provide funding to programs and organizations such as the National Association for the Advancement of Colored People or positively raise awareness of influential black and brown individuals throughout history. However, capitalistic tendencies of many organizations often result in exploitation of the month’s true purposes in an attempt to gain profit.

One recent example involves Barnes and Noble’s “Diverse Editions” Black History Month campaign. Barnes and Noble announced at the start of February that they would be releasing limited-edition copies of classic novels with reimagined covers featuring protagonists of color. This campaign immediately faced backlash, as many pointed out that the classic novels were primarily written by white authors about presumably white experiences. In fact, out of the 12 novels chosen to be featured, only one text, the Count of Monte Cristo, was written by a black author, Alexandre Dumas.

But the bookstore is not the only company that has faced backlash for campaigns that attempt to position themselves as allies for marginalized groups. In recent years, Disney has released multiple films that caused viewers to accuse Disney of “queerbaiting.” Most recently is the latest Star War installment “The Rise of Skywalker,” of which director J.J. Abrams advertised as having LGBTQ representation during the press tour before the release. Yet many fans were disappointed when the representation Abrams promised was limited to only one scene that captured two female Resistance fighters briefly sharing a kiss amongst a crowd. The representation promised was so short that it was even easily removed by Disney for the version of the film they released in Singapore.

Before “The Rise of Skywalker,” other Disney films such as the live-action “Beauty and the Beast,” and “Avengers: Endgame” were also promised to have LGBTQ representation. And they do, as long as representation includes singular scenes where characters are either briefly dancing or referencing a date with an individual of the same sex. Yet before each of these films, Disney employees and directors all made a point to promise representation to the LGBTQ community, only to provide snapshots.

But many companies who don’t produce movies or other forms of entertainment still find ways to profit off of the LGBTQ community. June was first officially designated as Pride Month by a U.S. president in 1999, but was celebrated many years prior with pride parades and events. Today, June marks the time that companies and organizations throw themselves into rainbow capitalism, also known as slapping a rainbow on a product to sell under the veil of inclusivity and allyship.

The foundational idea behind Pride Month includes a rebellious acceptance of identity paired with honoring those who lost their lives for being who they are. On June 28 of 1969, a group of plainclothes police officers raided Stonewall Inn of New York City, a well-known hub for the LGBTQ community, and arrested countless individuals. This event set off six days of “unrest, protest, and righteous rage,” according to Da’Shaun Harrison in his op-ed submission to Black Entertainment Televisions website.

In the 50s and 60s, members of the LGBTQ community faced an extremely anti-gay legal system and cultures that threatened their lives and ability to exist in society. It was normal for police to raid gay bars, but Stonewall escalated tensions Key individuals from that night include Stormé Delarverie, Marsha P. Johnson, Slyvia Rivera, and Martin Boyce who are credited with standing up against the police officers and are remembered as symbols marking the start of the U.S.’s path to LGBTQ rights.

But while companies such as Nike, Walmart and Jack Daniels may condone gay marriage, they still invest in private prisons, enforce slave labor and ignore the higher rate at which LGBTQ individuals suffer from substance abuse. The rainbows they paint themselves and their products with are only campaign strategies to incentivize profits while inaccurately advertising to the LGBTQ community that they are allies.

However, there is merit in even the most surface level of symbolic gestures that should be noted. An individual walking down the street, flipping through television channels or engaging in other products who sees themselves as validated through rainbow colors and “love is love” campaigns is a positive step for our country. Only two decades ago, companies were pulling their ads from the “Ellen” episode where she came out as gay. Today, clothing lines such as American Eagle, Calvin Klein, Under Armour, Gap, J. Crew, Reebok, Dr. Martens and more all have pride collections. Tech companies such as Amazon, Google and Apple have pride-centered products and commercials. These contributions to society and the representation they provide are important. But it must also be noted where the profits from these campaigns go.

The LGBTQ community did not riot on the streets for companies to sell “love is love” t-shirts or rainbow colored Apple Watch bands. They rioted for their right to exist equally as who they are. A company may hang up a rainbow flag in hopes that the queer community will spend their money there, but companies need to do more to be considered actual allies.

For marginalized groups, Black History Month and Pride Month serve as more than just a time to be proud of who they are or to remember important individuals through history. It is still a time of protest and to demand equality in society.

Companies need to be held to a higher standard of allyship. Profits from pride-focused campaigns should be donated to LGBTQ organizations like the Trevor Project or ensure efforts in hiring and supporting LGBTQ employees instead of only hanging up a rainbow flag. Campaigns like Barnes and Noble’s should encourage and highlight black and brown individuals telling their stories through their perspectives, and not just place black and brown protagonists on a few book covers.

In the meantime, if a child or individual sees themselves and their identity represented in a commercial or product and decides it is worth it to live another day as who they are, these advertisements can still serve as a source of good. But they could do so much more.

EMDC discusses rural economic development opportunities in Maine
The inside view: the issue with ResLife’s $2 an hour payment plan