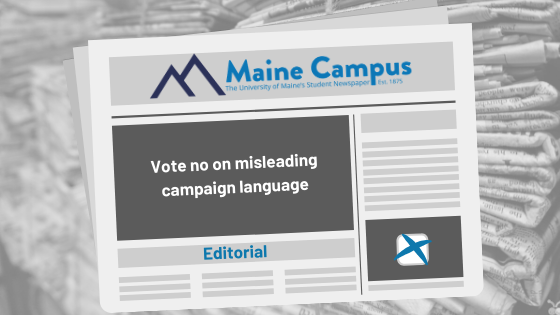 A quick drive around the Bangor, Orono and Old Town areas will reveal a new influx of campaign signs. This is to be expected, as Maine’s presidential primary vote approaches and Mainer’s prepare to choose their candidates and vote on referendum issues. However, certain campaigns, such as “Vote Yes on One, Reject Big Pharma,” are catching attention, not for the cause they support, but for their misleading language.

“Big Pharma” is defined as large pharmaceutical companies that participate in political groups and fund lobbyists. The language here connotes a powerful monopoly that uses their money to sway state and federal politicians. This idea is one Mainer’s, and people who live in the U.S. in general, hold in contention. The slogan “Vote Yes on One, Reject Big Pharma,” written on these campaign signs gives the appearance of opposing the influence that big pharma companies have in the government.

Yet, when Mainers arrive in the voting booths on March 3, they will be faced with a ballot question that doesn’t pertain to “Big Pharma” at all. The question will read: “do you want to reject the new law that removes religious and philosophical exemptions to requiring immunization against certain communicable diseases for students to attend schools and colleges and for employees of nursery schools and healthcare facilities?”

This is because Question One on the ballot is actually a people’s veto measure to overturn a vaccine mandate bill signed into law by Gov. Janet Mills last year. Mills signed the bill last May to eliminate religious and philosophical exemptions to state vaccination requirements after vaccination rates dropped and three Maine counties developed cases of whooping cough. The bill would prevent students from attending school if they did not receive certain doses of vaccinations.

Yet the signs, bumper stickers, and advocates on college campuses and public spaces are not framing their campaign around vaccinations. Instead, they are using “reject Big Pharma,” purposefully using misleading language that misinforms Maine voters in an attempt to sway the referendum vote in their favor.

This is important because as a People’s Veto issue, the Yes On One campaign was required to collect at least 63,067 signatures of registered voters in support of the veto in order to be placed on the ballot. If the campaign spreads misinformation to Mainers with their framing and language, they may have acquired signatures from Mainers who did not fully support their actual cause.

Instead of focusing their campaign efforts on the merits of the vaccines, or the belief in a right for an individual to claim religious or philosophical exemptions, the Vote Yes on One campaign plays on peoples’ fears of big pharmaceutical companies that are often tied to the opioid problems in the state.

In this way, “Big Pharma” is used as a buzzword to trigger a response in voters, who may oppose pharmaceutical monopolies and their place in the opioid debate, but support vaccines, and convince them that approving the new referendum would be the right choice.

Because of this, citizens are having to take responsibility to help educate their fellow voters on the true meaning behind Question One. On Facebook, users have shared a post highlighting the campaign signs and explaining the discrepancy between the “Big Pharma” buzzword and the actual implications on vaccine regulations the measure poses.

This attempt at fear-mongering is one example of how political campaigns can use framing and language with the malicious intent of misleading voters. While it is always the responsibility of the voter to ensure they are educated before making a decision, campaigns should not attempt to twist ballot measures into puzzles for voters to unriddle to understand the clear underlying implications of the ballot measures they are accepting or rejecting.

Whether Mainers decide to support the new bill or vote to overturn it, the ways the Vote Yes On One campaign has framed their efforts and chosen certain language to help their cause needs to be noted. Using buzzwords, playing off citizens’ fears and not being entirely transparent about the true meaning of their campaign poses a dangerous threat to how political practices are executed in our society and how the future of Maine will look.

Instead of hiding their position, campaigns should be transparent and directly state what they are for and against. As voters educate themselves about the coming election season, honest and straightforward campaigns would guarantee that Maine citizens are voting for the government they actually want.

GSS
Maine falls to Hartford in a defensive battle