Mandatory vaccinations are a frightening overstep of government power

Home /Opinion/Mandatory vaccinations are a frightening overstep of government power 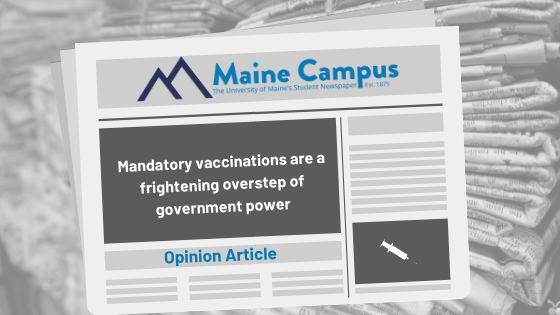 On March 3, Mainers will vote on a contentious referendum question deciding whether we should repeal Legislative Document 798. This is a state law signed into effect by Gov. Janet Mills that enforces mandatory vaccinations for public school students. While vaccinations are life-saving, quintessential and should be voluntarily given to students, this law is a gross overreach of governmental authority.

The religious rights of Mainers should be respected. Some citizens have a legitimate religious aversion, such as the Church of Christ, and some branches of the Catholic Church, to placing certain substances inside of their bodies. Other comparable religious belief-based traditions include how some practicing Jews do not eat certain meats, certain religions disagree with tattoos or body piercings, some Christians disagree with premarital sex, devout Muslim women wear hijabs and others. It would be unthinkable to force these religious individuals to perform acts contrary to their beliefs. Considering how the 14th Amendment interprets the Bill of Rights to also apply to the states, the religious free exercise clause of the First Amendment also applies. This is reflected in the Maine State Constitution. Our state has no authority to infringe on our citizens’ free exercise of religion.

There have been some grievances about the Yes-on-1 campaign’s tactics, but this does not detract from this law impeding religious liberty and personal autonomy. For example, one recent OpEd in “The Maine Campus” argues that the groups opposing this law have a deliberately vague campaign. As opposed to focusing their campaign on the heart of the referendum, allowing religious and philosophical vaccination exemptions, these groups have argued that citizens should vote yes on question one in order to “reject big pharma.” These groups are working to garner more support by framing the referendum on rejecting large pharmaceutical companies that allegedly push for their medicines, including vaccinations, to be sold. This previous OpEd rightly notes how advocacy groups should not confuse voters by framing issues in ways that would gain more support. Mainers should educate themselves to know the actual repercussions of ballot questions. However, just because the groups that advocate for repealing mandatory vaccines have used some questionable tactics does not mean that Mainers should ignore the benefits of repealing mandatory vaccines.

As a counterpoint, “The Bangor Daily News” even states that pharmaceutical companies have contributed over $1.4 million in campaign contributions since 2008. Additionally, Yes-on-1 leader Cara Sacks argues how these same companies that have helped create the opioid epidemic could have dubious motives in requiring vaccines, such as a vested financial stake. On countless issues, advocacy groups on both sides of the political spectrum use misleading tactics. Despite some lobbyists’ questionable campaign, Maine parents should still be able to choose whether or not to vaccinate their own children.

Gov. Mills’ law, which removes these religious or personal exemptions from receiving vaccinations, sharply contrasts the rest of the nation. The National Conference of State Legislatures notes how Maine is only one of five states that does not permit religious or personal exemptions from vaccinations. Maine legislators should have seen how extreme this law is in comparison to other states before passing it. Parents and children should have autonomy over their own bodies. If vaccinations are contrary to one’s religious beliefs, one should not be forced to inject a substance into one’s body. Maine should allow parents to make these deeply personal choices about their children for themselves.

This law also does not consider extenuating circumstances. For example, certain online academies have their students classified as public school students. This law makes it so that even these online public school students must mandatorily be vaccinated, despite their risk of contagion being greatly reduced due to their drastically limited interaction with other students. While most students probably should be vaccinated, it is frightening that our state government is forcing us to vaccinate our children. Personal autonomy and liberty with one’s own body are not light matters.

Vote yes on question one. This Maine law must be overturned. This law is an appalling overstep of our state government, as it violates the religious freedom of Maine parents and children. This law also contrasts most other states in the nation and does not consider special circumstances. Instead of forcing public school students to get vaccinated, communities should have stronger discussion and education about the benefits, or disadvantages, of getting vaccinated. This law seems positive, but it is a slippery slope to voluntarily surrender any right to a government. Like getting vaccinated, giving to charity is also a good thing; however, the government should not impose a law that mandates it.