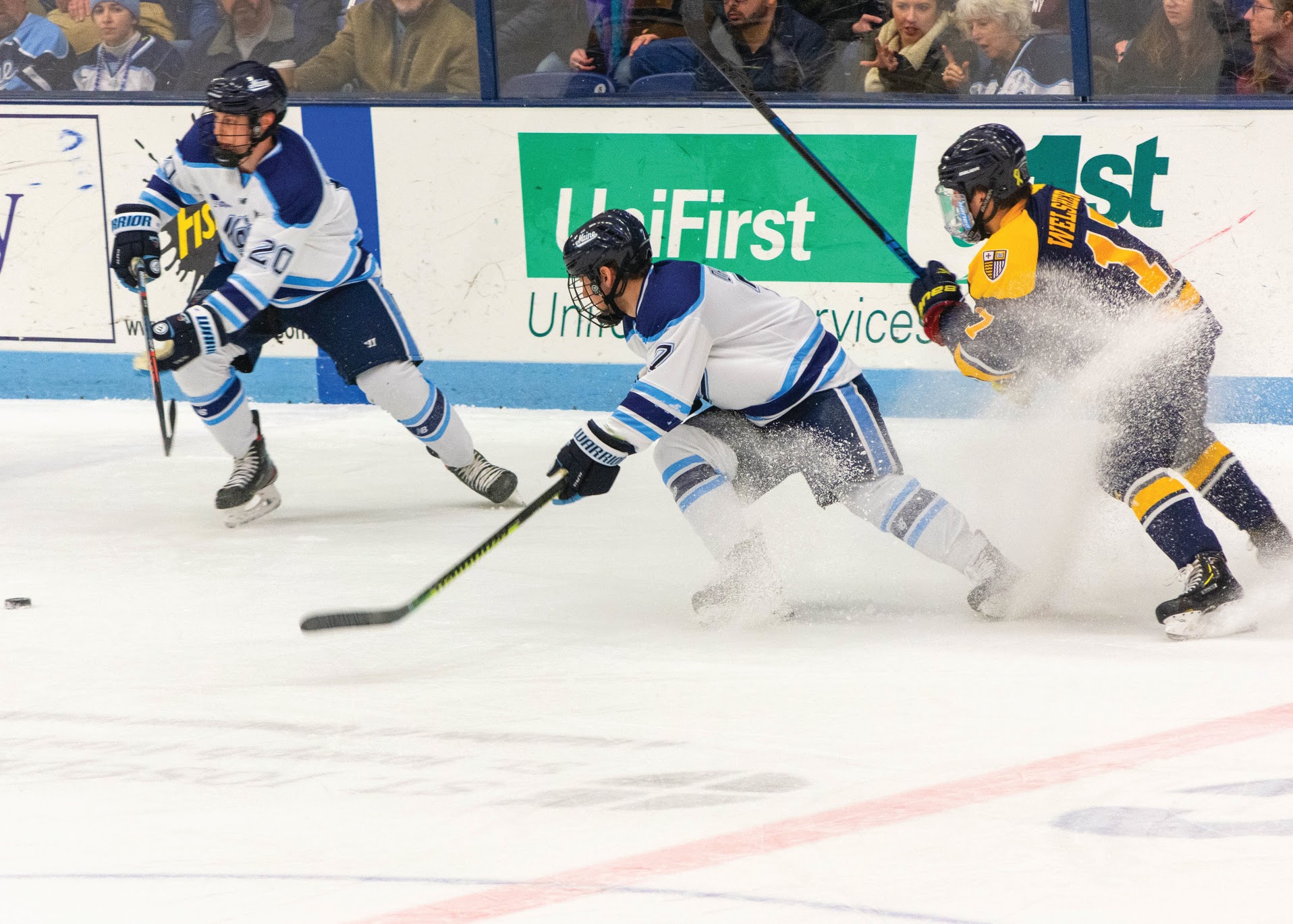 The University of Maine men’s hockey team defeated the Merrimack Warriors 6-2 in game one of their Hockey East weekend series on Friday, Jan. 31, at Alfond Arena.

Maine won the opening faceoff in front of a loud and rowdy home crowd, and the Black Bears went right on the attack in the Warriors zone. After a scramble for the puck in the corner, first-year forward Ben Poisson managed to hook the loose puck and quickly fed it out to second-year forward Jacob Schmidt-Svejstrup. Schmidt-Svejstrup sized up his options on a slapshot but instead fed a streaking second-year forward Adam Dawe in the slot, and Dawe buried the puck to get his sixth goal of the season and Maine’s first of the night.

At the halfway point in the first period, the Black Bears caught the Warriors sleeping in their zone, allowing third-year forward Eduards Tralmaks and fourth-year forward Mitchell Fossier to each get a shot off on Merrimack’s first-year goaltender Troy Kobryn before Doherty corralled the loose puck and buried it behind Kobryn to extend Maine’s lead to 2-0.

Continuing the fireworks in front of the loud crowd gathered in the Alfond Arena, the Warriors snapped to attention, capitalizing on a powerplay with just over seven minutes remaining in the first period. The puck was rimmed along the boards and took a bizarre bounce off the Zamboni doors as it slid right into the slot, where first-year forward Ben Brar scooped the loose puck up and snuck it past Maine’s third-year goaltender Jeremy Swayman.

Maine held the 2-1 lead going into the first intermission. Skating back onto the ice, Dawe picked up his second goal of the night, again coming off an assist from Schmidt-Svejstrup, to give the Black Bears a 3-1 lead. The Warriors answered with another power-play goal, this time coming off the stick of fourth-year forward Sami Tavernier, cutting the lead to 3-2 in the second period. The Black Bears held off the Warriors heading into the second intermission, but took back to the rink with determination for the final period of play.

Fourth-year forward Samuel Rennaker extended Maine’s lead to 4-2 just five minutes into the third period, picking up his fourth goal of the season. Shortly after, third-year forward Kevin Hock scored his first career goal as he was left all alone and had a wide-open net. Merrimack, trailing three, elected to pull their goaltender and sent six attackers onto the ice in a last-ditch effort as the final minutes ticked down. Maine tightened up on defense, giving Swayman a wall, and a corralled loose puck led to an empty-net goal for Tralmaks, burying the Warriors at 6-2. Swayman finished with 19 saves on 21 shots, while Maine took 35 shots on goal.

Maine skated back onto the ice the following night riding their momentum from their previous victory, closing out the weekend series with a second victory over the Merrimack Warriors. The Warriors tightened up their defensive efforts, as Maine found it difficult to generate shots early in the match. Maine worked their way through the neutral zone, creatively picking off defenders to create openings for the puck handler and, eventually, Fossier finished off an odd-man rush on Kobryn.

The Warriors tied the game up at one early in the second period, once more capitalizing on a powerplay. Just seconds prior, Schmidt-Svejstrup was sent to the penalty box for hooking, leading to a faceoff in Maine’s zone that was won by Merrimack. First-year forward Mac Welsher gathered a loose rebound deflected by Swayman and wrapped the puck around the backside of the net to beat the tender for the tying score.

Maine seemed overwhelmed following the tying score, as the Warriors proceeded to fire off nine unmatched shots against the Black Bears through the opening minutes of the second period. At the eight-minute mark, an interference penalty on first-year defenseman Zach Uens sent the Black Bears on the powerplay, and Maine seized the advantage. Third-year defenceman JD Greenway corralled an icing attempt from the Warriors and flung the puck towards the neutral zone. Doherty led a 2-on-1 rush with Fossier, with Doherty drawing the defender, feeding the puck over to Fossier, who beat Kobryn one-on-one for the score.

First-year forward AJ Drobot extended the Black Bear’s lead to 3-1 with an assist from Tralmaks, after the duo slashed through the Warriors defense in their own zone. Maine took the 3-1 lead into the second intermission.

Out of the gate, the Warriors intended to make the Black Bears’ comfortable lead as short-lived as possible, utilizing the remainder of a powerplay from the second period to push deep into a depleted Black Bears zone. Uens made up for his penalty in the prior period by capitalizing on the power play, taking a feed from Tavernier and sending a wrist shot through traffic, deflecting in for the score on Swayman, decreasing Maine’s lead to 3-2 in the opening seconds of the third period. As Greenway’s penalty had been served, he took off towards the Black Bears bench.

Both teams returned to full strength a few minutes later, and the Black Bears elected to go back on the offensive. Several shots from Fossier, Poisson and fourth-year forward Patrick Shea kept the Warriors on their heels as the game clock ticked down. Maine held on to defeat Merrimack 3-2 and picked up their fourth straight win against Hockey East opponents. The Black Bears move to 14-9-4 on the season and 8-7-2 in Hockey East play as Swayman picked up 33 saves on 35 shots. Maine took 28 shots on goal.

Maine will return to the ice Friday, Feb. 7 and Saturday, Feb. 8, when they face Northeastern University at the Alfond Arena. 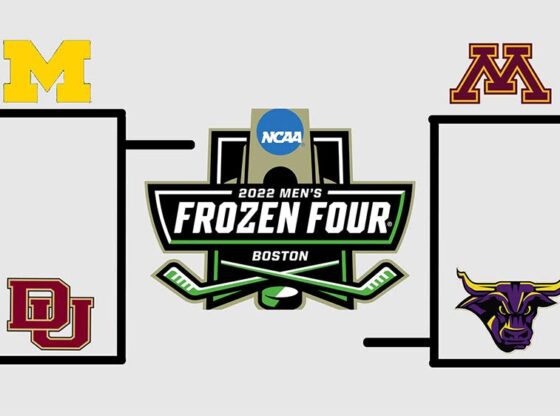 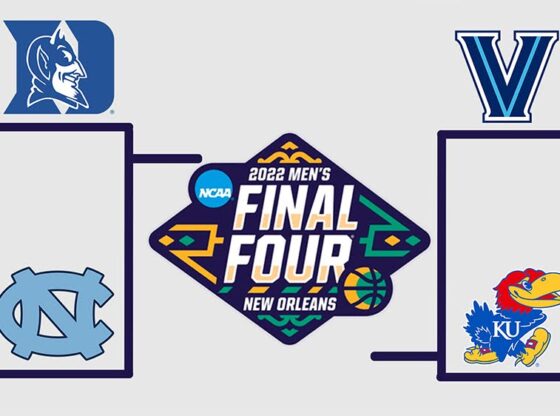 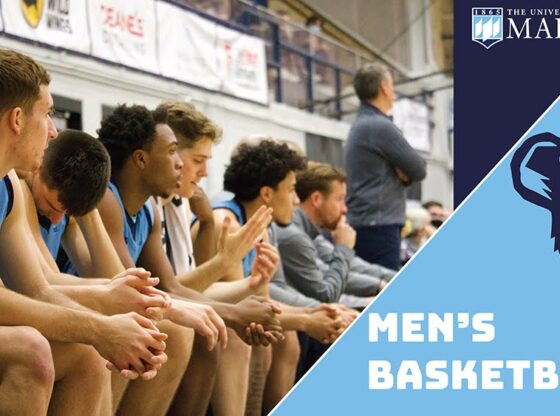 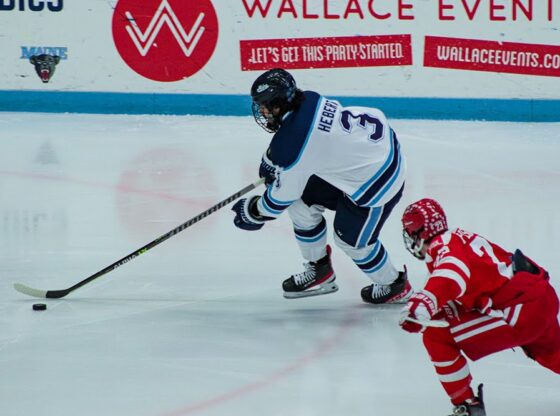 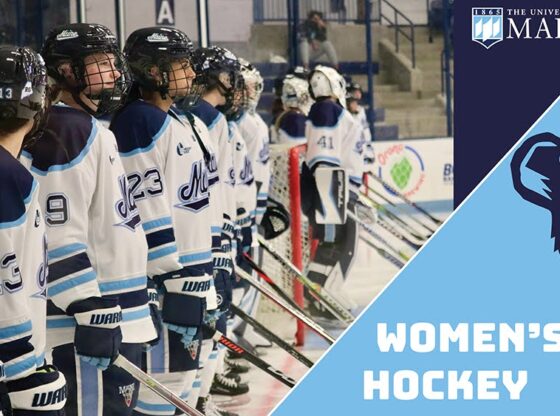