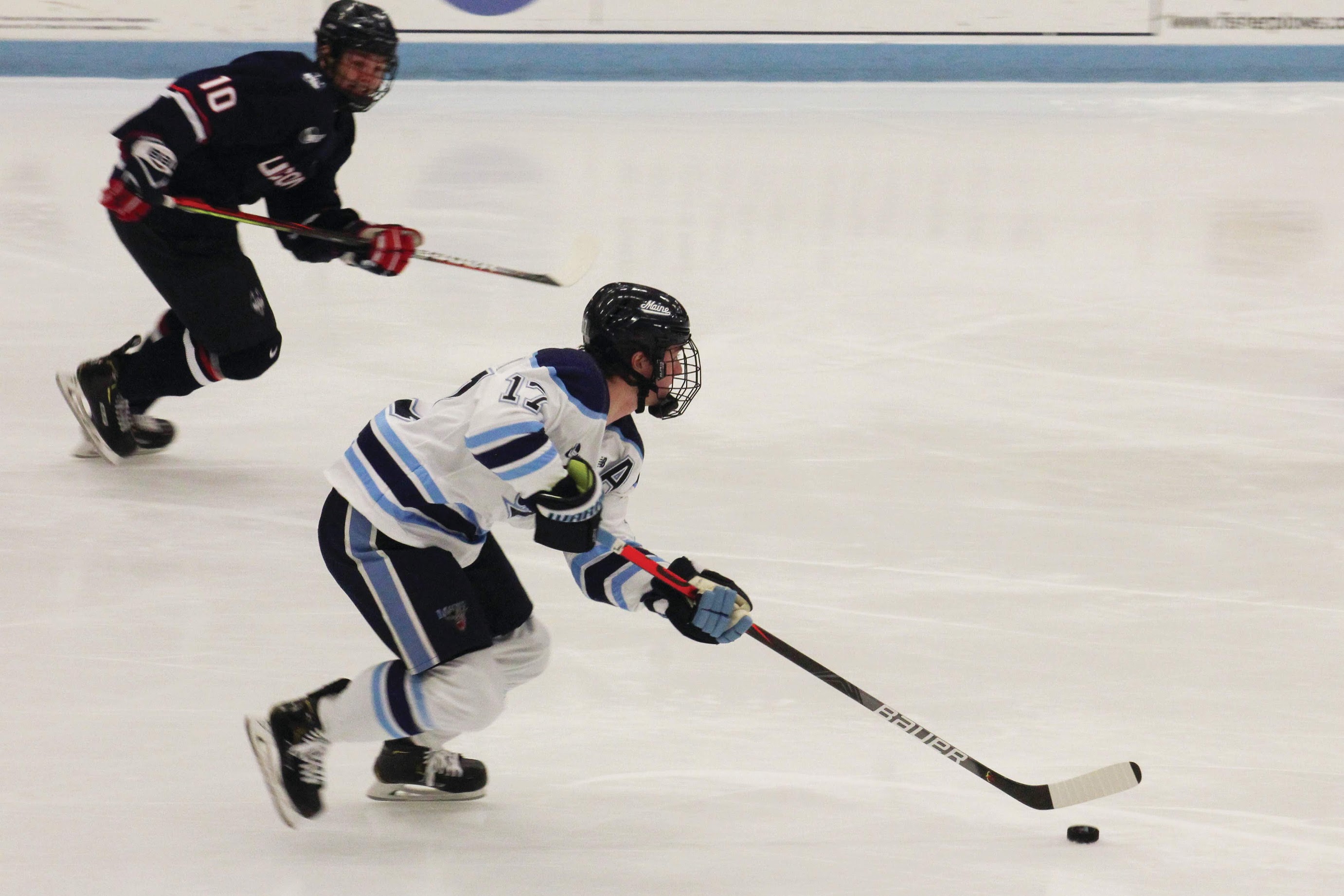 Game one of the weekend series against the University of Connecticut Huskies took place on Friday, Feb. 14 ending in a 3-2 loss for the No. 17 Black Bears at Alfond Arena. This was the first loss for the Black Bears at home this season as they fell to 15-10-4 on the season.

The game began with the Huskies scoring two first-period goals to take a commanding lead early on. First-year defenseman Jake Flynn got the Huskies going early, scoring with an assist from fourth-year forward Ben Freeman.

With over half of the first period played, the Huskies extended their lead to 2-0 when second-year forward Carter Turnbull carried behind the net, feeding fourth-year forward Alexander Payusov in the right circle who then blasted a one-timer past third-year goalie Jeremy Swayman. Connecticut took the 2-0 lead into the first intermission, carrying all the momentum into the second period.

Maine turned the momentum of the game with a powerplay goal eight minutes into the second period, as fourth-year forward Tim Doherty scored his 14th goal of the season and cut the Huskies lead to 2-1 with over half of the game remaining. Second-year forward Jakub Sirota took a shot on goal from the blue line, where it was then redirected by fourth-year forward Samuel Rennaker into the back of the net, to tie tying the game at two for the remainder of the second period.

In the third period, the Huskies found the back of the net when Freeman, continuing to stay hot on the night, scored the game-winning goal for the Huskies. Swayman made 33 saves on the night while the Black Bears could only muster 26 shots on Huskies second-year goaltender Tomas Vomacka.

In the second and final game of the weekend series, Mitchell Fossier scored his fourth career overtime goal to give the Black Bears a 1-0 victory over UConn. Both teams skated to a 0-0 tie in regulation to push the game to overtime, with Swayman making 38 saves. The Black Bears went 0-3 on the power play and went perfect on the penalty-kill, going 3-3. Maine blocked 10 shots as a team to help preserve Swayman’s shutout throughout the contest. Maine took 26 shots throughout the contest, connecting on their final shot of the weekend in the overtime period.

Third-year defenseman JD Greenway forced a turnover in the neutral zone and flipped the puck ahead to Doherty, who played a perfect pass over to Fossier, who did the rest. The captain’s overtime game-winner gave Maine a 1-0 win and a series split with Hockey East rival UConn.

The Black Bears are currently tied at fourth place with a record of 10-8-2 in Hockey East play and 16-10-4 in overall play. Maine will continue their homestand when they invite the University of Vermont Catamounts to the Alfond Arena on Friday, Feb. 21, and Saturday, Feb 22. The puck drops are set for 7 p.m. on Friday and 4:30 p.m. on Saturday.