On Sunday, Feb. 16, the tip-off for the NBA All-Star game revealed a new concept for the method in which the score was tallied. This year, the format was changed from a regular basketball game, where the team’s score in every consecutive quarter is cumulative, to a quarter-by-quarter scoring set up with rollover cumulative scoring for the final quarter. The rollover method would sum the score quarter-by-quarter and keep those scores stored until the fourth, then challenging each squad to race each other to a final target score in the fourth quarter. The respective winners of the first three quarters received 100,000 dollars from the league to be donated to a charity of their choice. Securing the final quarter would grant the winner 200,000 dollars with the same intent.

The response from fans and the media was excellent, and the All-Star game got some of its best ratings in the past decade. A significant amount of communication and idea-sharing between the players and the league itself made the entire set up possible.

“We’ve been very focused on making it more competitive, making it more exciting and making it fun. And we’ve had a great collaboration with the union. For this year’s game, we really focused on what new things we could do to make it a really competitive game where each quarter mattered in this case,” League President of Operations Byron Spruell commented before the contest’s tip-off.

To honor the late Kobe Bryant, the final target score of twenty-four was instituted, among other aspects of the game. For example, a 100-105 cumulative score heading into the fourth quarter meant the winner needed to score 124 points to end the game. This concept change connects to Ball State University’s Professor Nick Elam, who created the Elam Ending rule. An Elam ending is a basketball system that adjusts game-ending scenarios by eliminating the clock and setting a target score based on the leading team’s total.

Facing off in this year’s clash, a return of last year’s captain’s pitted the Los Angeles Lakers’ small forward LeBron James against the Milwaukee Bucks’ Giannis Antetokounmpo for the drafting of their respective teams. James elected to surround himself with hometown friends, as Lakers center Anthony Davis and Clippers small forward Kawhi Leonard were his first two picks. Rounding out the starting rotation for Team LeBron, Dallas Mavericks young phenom point guard Luka Doncic and Houston Rockets shooting guard James Harden held the backcourt firm. For Team Giannis, Philadelphia 76ers center Joel Embiid would be sizing up Davis, while Toronto Raptors small forward Pascal Siakam and Antetokounmpo would focus on a strong matchup against James and Leonard. First-time All-Star Atlanta Hawks point guard Trae Young would be running the floor for Team Giannis, working with Boston Celtics point guard Kemba Walker to round out the backcourt.

Team LeBron came out fast, scoring 53 points in the opening quarter, with the starters putting on a show for the fans with alley-oop jams and impressive shots. Team Giannis was asleep at the wheel in the first quarter, and it was most apparent on a steal by Philadelphia 76ers point guard Ben Simmons after subbing in on Team LeBron. Simmons jumped the passing lane on a bounce from the Miami Heat’s power forward Jimmy Butler and took off down the floor for the easy slam. A multitude of buckets like this gave Team LeBron a commanding lead heading into the second quarter, holding 12 points over Team Giannis.

Not to be outdone, Antetokounmpo stepped back onto the court and dialed himself in for his best quarter of the contest, using strong passing and powering to the basket as Team Giannis outscored Team LeBron in the second, 51-30. This push was capped off by a last-second, half-court shot made by Young, giving Team Giannis a nine-point lead in the final score.

Being two of the most team-friendly guys in the league, James and Antetokounmpo went on the rotation for the third quarter, giving the bench and reserves some playing time. However, when crunch time came and the score became crucial, both captains stepped back onto the court and firmly fought the remainder of the quarter. Oddly enough, they still tied 41-41 following a slew of scoring to end the quarter.

As the final quarter kicked off, the final score to reach was set at 157, with Team Giannis holding a 140-133 lead over Team LeBron, though that lead quickly dwindled and the two sides began racing up and down the floor, challenging each other with increasing effort at each end. To cap off the contest, with Team LeBron holding a 156-155 lead, Davis backed into the post and was fouled while trying to catch a pass from James. After missing his initial free throw attempt, Davis sank the second one and won the contest for Team LeBron, their second consecutive year winning the All-Star Game. Antetokounmpo led his team with 25 points, 11 rebounds, and four assists. Embiid and Walker scored 20 and 23 points respectively for their team.

Team Lebron was led by James, scoring 23 points, grabbing five rebounds and putting up six assists. Oklahoma City Thunder shooting guard Chris Paul put up 23 points of his own, along with two rebounds and six assists.

With the All-Star break over, the back half of the regular season starts to heat up, and we’ll see the league continue to thrive.

Legislators urged to vote in favor of revisions to Maine Indian Claims Settlement of 1980
Men’s hockey wins, and ties against Vermont, continuing their hot streak 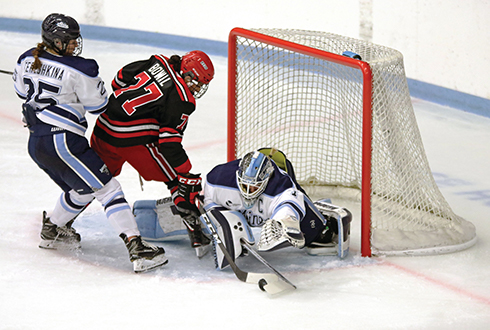 UFC Teixeira should be next…