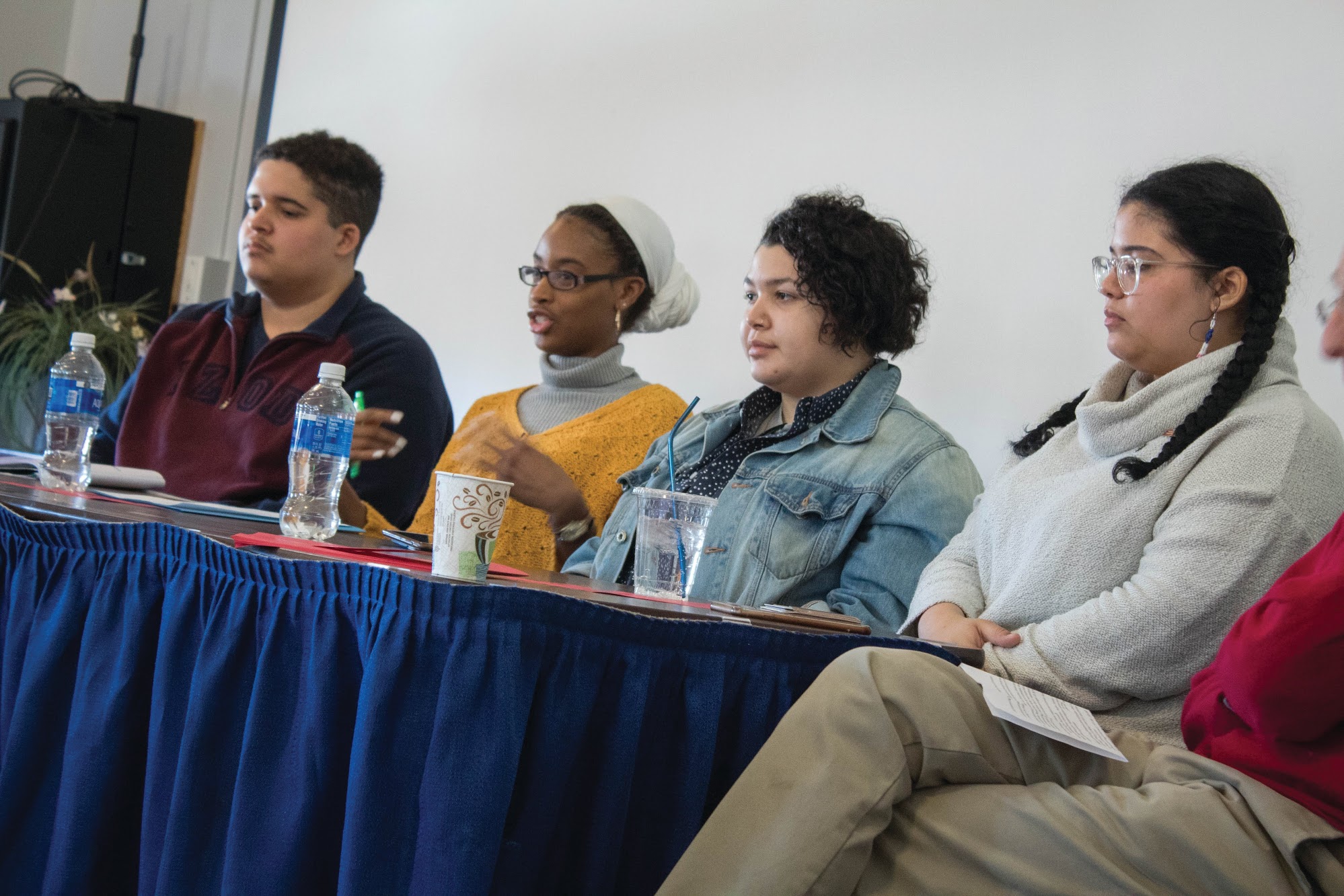 Four students speak to an attentive audience on how they experience racism in their daily lives in the Memorial Union on Thursday, Feb 20. Photo by Antyna Gould

On Thursday, Feb. 20, students, faculty and community members gathered in the Bangor Room of the Memorial Union for a student panel, titled “Experiencing Racism Today: Experiences of Student Activists and Historical and Philosophical Insights.” The event, held as a part of the Socialist and Marxist Studies Series, sought to shed light on the realities faced by people of color throughout their lives and how they have been impacted.

The event was kicked off by panelist Nathaniel Watkins acknowledging the Penobscot Nation’s right to the stolen land on which the campus was built. Moderators Elisabeth Redwood and Professor of Philosophy Doug Allen then stepped in to pose questions to the panel, which included student activists MJ Smith and Gabriela Reyes.

A topic of particular significance to the panel was the process of othering. The panelists each shared several personal experiences in which the people and social structures surrounding them actively worked to reject them.

“You should always be making someone next to you more comfortable than you are yourself,” Smith said, speaking about the stress of having to mask their own identity to avoid alienation by others.

The conversation then shifted towards the subject of colorblindness, or those who purport to not color in a racial context. The panelists unanimously agreed that, while most have good intentions when using the phrase, seeing and acknowledging one’s race is of great importance.

“The sentiment behind trying to assert that you’re colorblind is on the surface level a positive one, but telling someone who has a generational lineage of pain and erasure that ‘it worked’ is all you’re really doing,” Watkins said.

Others added that part of seeing race is seeing the disenfranchisement faced by people of color, and that to ignore or not see race is to effectively allow for those discriminatory power structures to continue to exist.

The event went on to cover numerous race-related topics, as Reyes shared personal experiences and anecdotes that furthered the discussion. The panelists also talked at length of the plight faced by the people of Puerto Rico, who are denied various basic rights, bringing up their inability to vote in U.S. general elections and the lack of support they received during and following Hurricane Maria.

Connecting the students’ stories to historical figures and events related to racism in America, Allen touched on a variety of leaders, such as Malcom X and Martin Luther King Jr. He made points concerning student activism, comparing the lack of student activism during the civil rights movement to what is seen today.

The event closed with a discussion of what the UMaine community can do to improve, such as hiring more professors and mental health care professionals of color, and providing more funding towards departments that promote diversity.

“Being able to expose students in different disciplines to diversity is very enriching,” Reyes said, noting that the university should include more non-western narratives in curriculum.

As the audience asked questions towards the end of the event, one listener brought up the fact that traumatic narratives were a symptom of racism being ingrained in the construction of the country, maintaining that those narratives still exist for a reason.

“Focusing on cultivating a culture for African Americans and an identity that isn’t rooted in a reaction to something painful is a long-term goal,” Watkins explained. “But it’s not where we are now.”

The Socialist and Marxist Studies Series will present its next discussion, “What is Decolonization,” on Feb. 27 in the Memorial Union.