The inside view: ResLife’s cold and distant approach 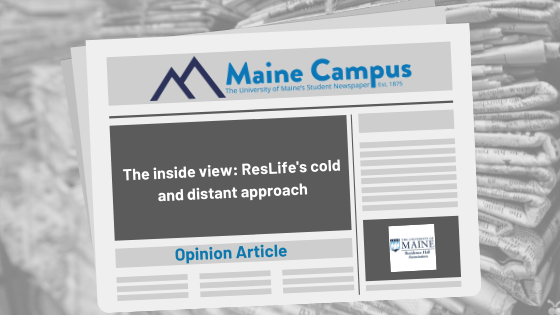 Being a Resident Assistant (RA) at the University of Maine is far from a relaxing job.  With weekly programs and incident reports in addition to coursework and social responsibilities, an RA’s day is pretty full. While every RA signed the same contract and attended the same orientation, which laid out the details of their employment, the orientation and training don’t adequately prepare the RAs for the treatment they receive from the Department of Residence Life’s own professional staff supervisors.

Over the past few weeks, staff members from the Maine Campus spoke with current and former UMaine RAs. Their experiences with ResLife, as well as my own, revealed a general attitude that seems apathetic at best. RAs were told in an email that they would be allowed to speak to Maine Campus staff even though it was against the terms of their contract. Even with this permission from the department, every current RA interviewed wished to remain anonymous, as they feared repercussions.

“I’m not going to be 100% honest in this interview,” said one RA who couldn’t find the time to meet, “because if I am I know I’ll be fired.”

That shouldn’t be surprising, really, as the same ResLife email stated that, “If you are approached by the Maine Campus and do choose to speak to them, please let [us] know directly.”

This isn’t the first time the Department of ResLife has shown itself to be overbearing. One RA described their experience with the department as complicated; their work-life balance was skewed pretty far in the work direction, and supervisors like to pry during their one-on-ones with RAs. Some RAs described their supervisors as taking an overly inquisitive interest in their RAs since good mental health is quintessential to managing so many residents. But sometimes, the prying revealed exactly what it was meant to find: RAs are overworked and burnt out.

Maria Beaulieu, a former RA who graduated in 2018, told the Maine Campus that even three years ago, RAs were hesitant to tell their supervisors how they felt about their position out of fear there would be disciplinary consequences. Even now the department is seemingly more likely to terminate an RA than assist them in getting the help they need. In the past, ResLife has terminated RAs from their position as soon as ten days before the end of winter break. Often, these students can’t afford to return for the semester, and when they do, the students have felt ostracized by the department and their former community.

One RA explained that the job sneaks up on you; one day you’re in the common room chatting with your kids, and the next you’re going to class in yesterday’s clothes because you had to stay up until 3 a.m. writing incident reports for an inappropriate doodle scrawled on the wall. The workload is often too much; at least one hour of each RA training session is devoted to a class called “How to Avoid Burnout,” in which RAs are told to use their whole four days off every month. In fact, RAs found the training itself almost useless. All told, for the two-week-long summer training, only about an hour was devoted to policy training, with lead RAs having to pull their staff to the side during breaks in training to cover what to do with an injured student or a resident who is at risk for self-harm.

For the most part, RAs reported being on better terms with their immediate supervisor than with ResLife higher-ups. Interactions with Pro-Staff usually leave RAs with a bad taste in their mouth; I was once given a verbal warning for turning my back on a Community Coordinator during a conversation to look at something behind me. There’s also a pretty blatant disconnect; staff that deal with overnight power outages and stay up for hours, sometimes days, on end are thanked with a box of a half-dozen donuts for a staff of nine. Apparently, the end goal of ResLife has eclipsed the needs of their own employees. Nobody’s saying that the resident students of UMaine don’t need the care they’re getting, but the RAs could certainly do with a little attention themselves. Beaulieu confirmed that this aspect of ResLife is the only one that’s remained constant over the years.

Overall, the interviewed RAs were split on whether or not they would recommend the job to others. Those that would recommend the position emphasized the slash to school bills, those that wouldn’t recommend the position criticized how they are treated and how much is demanded of them. After hearing these RAs’ personal testimonies along with having had experience in the department, it seems as though the downsides outweigh the benefits. The pay is too little, the work is too much, and the way the bottom tier of the ResLife hierarchy is treated is nothing short of disappointing.