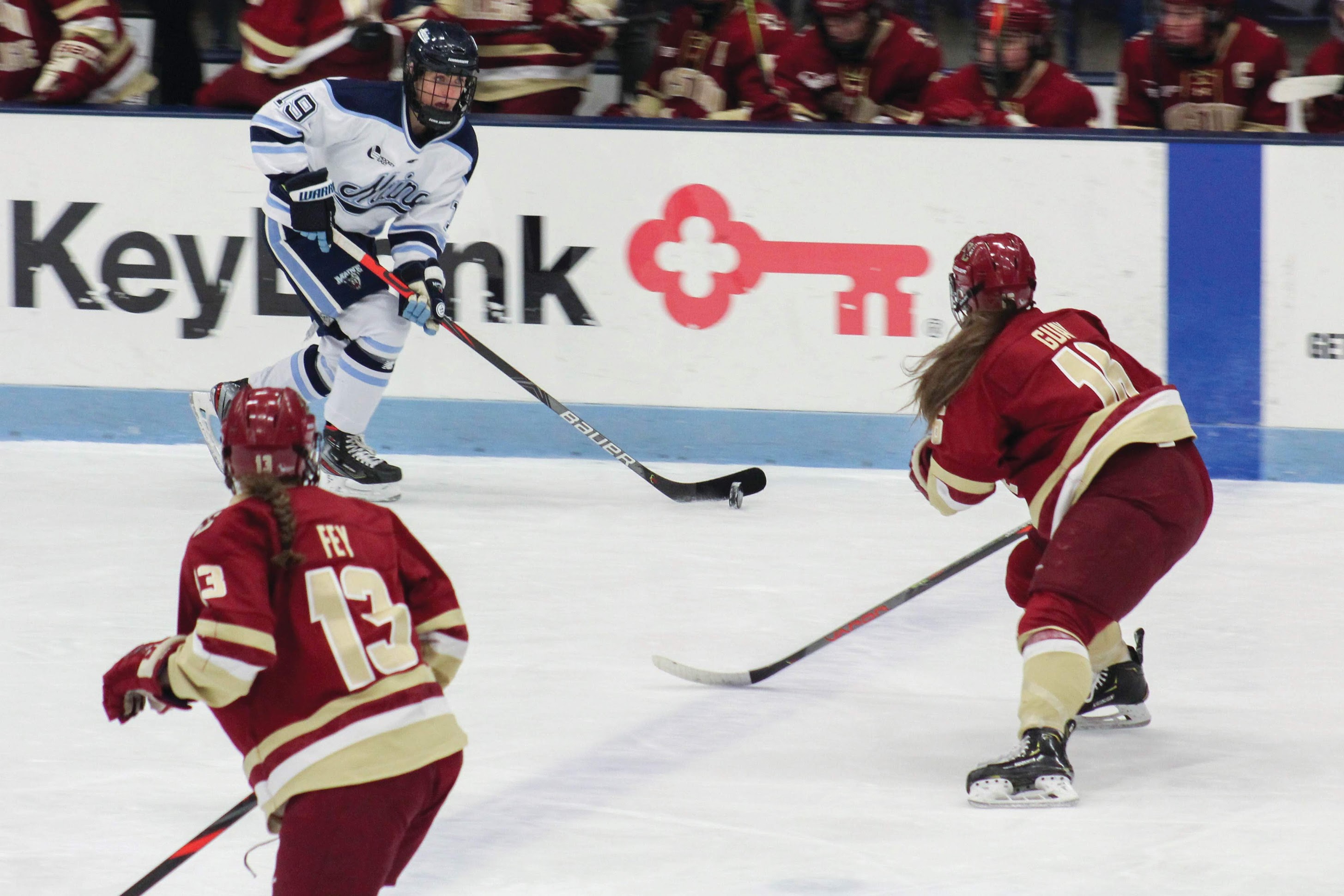 The University of Maine’s women’s ice hockey team took to their home ice for the first contest against the Boston College Eagles on Friday, Feb. 14. The Black Bears fell to the Eagles 3-2 in a tight overtime contest.

Maine started out the scoring just five minutes into the game when first-year defender Ella MacLean scored the second goal of her rookie season. Second-year forward Liga Miljone worked the puck up the boards over to MacLean at the high point, where she ripped a slapshot through the screen putting Maine up 1-0.

Boston College answered with a goal of their own with just over a minute remaining in the first period, as second-year forward Maegan Beres collected a pass from first-year defender Hadley Hartmetz on the backhand and tucked it past third-year goalie Carly Jackson’s pad. The teams traded goals again in the second period with the Eagles getting the first and Maine scoring the second. Third-year forward Delaney Belinskas scored off of an assist from first-year forward Olivia Finocchiaro to put the Eagles up 2-1 just over six minutes into the second frame. The Black Bears would find the answer to re-tie the game at 2-2 when first-year forward Ida Kuoppala got her 16th goal of the season. Third-year defender Taylor Leech got her 10th assist of the season as she ripped the initial shot that then got tipped by Kuoppala, giving fourth-year forward Tereza Vanisova the secondary assist and her 17th of the season.

Jackson made 20 saves in the third period for the Black Bears to help preserve the tie. Boston College eventually got one past Jackson in overtime as Belinskas skated into the offensive zone, burst past two defenders to pick up the puck on the right-wing and then fired a shot from the bottom of the right circle that squeezed between Jackson’s legs. Jackson made 38 saves on 41 shots while the Black Bears took 32 shots on goal.

On Saturday’s senior night, the Black Bears took back to the ice with motivation and drive to pick up the victory for the graduating players’ last regular-season home game. Maine once again forced overtime but picked up the 2-1 win, splitting the weekend series with the Eagles.

Both teams would find themselves locked in a tight battle in the second period, where both goaltenders blanked the opposition. Jackson made 13 saves in the second period while the Black Bears took nine shots on goal but could not find the back of the net.

Just two minutes into the third period, Eagles’ first-year forward Kelly Browne scooped up the loose puck and roofed it home for an unassisted tally from the bottom of the right circle to knot the game at 1-1.

Maine would find themselves with an exciting finish to senior night, as all-time points leader Vanisova stole a puck at center ice and fired home her final shot in Alfond Arena, giving the Black Bears the 2-1 victory in overtime.

Maine will be traveling to take on the Vermont Catamounts in their final regular-season matchup on Saturday, Feb. 22 at 4 p.m.