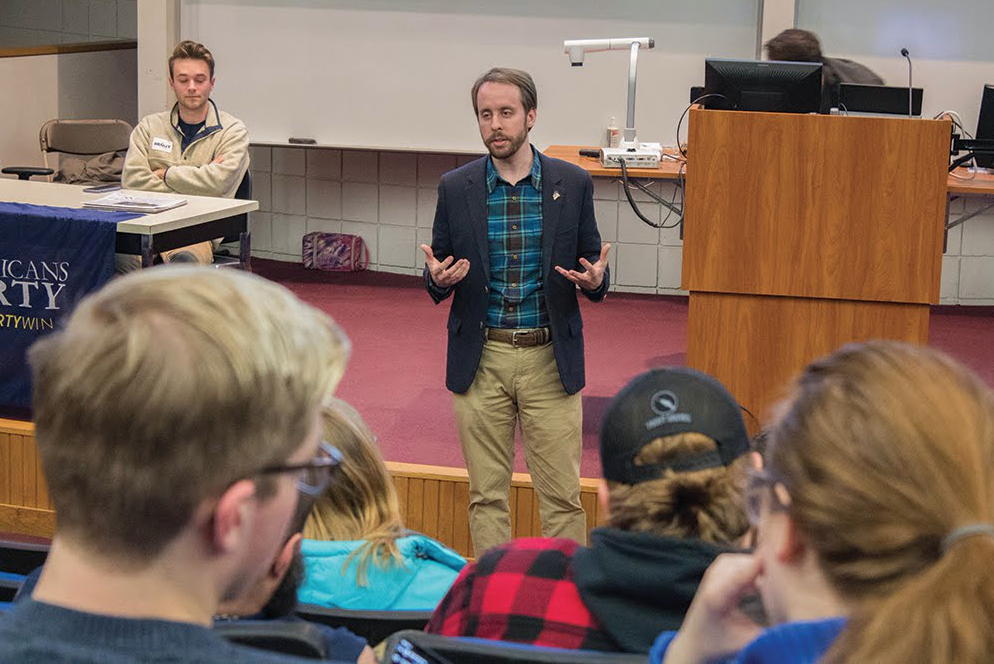 On Jan. 30, the University of Maine’s chapter of Young Americans for Liberty (YAL) hosted Eric Brakey, a former Republican Maine state senator that is running for U.S. Congress in Maine’s 2nd District. Brakey’s visit was held as a town hall style meeting in the Donald P. Corbett Building on the Orono campus.

When asked about climate change, Brakey rejected the idea “that the only way to solve this problem is to invest a lot of power in centralized government authorities.” He stated that if he is elected to Congress, he would like to “free up [America’s] ability to develop alternative energy” and opt for nuclear power that is “clean, safe, cheap and abundant” rather than using solar and wind power.

Brakey responded to a question regarding an anti-transgender bill affecting transgender youth by stating that he feels as though there is a more important conversation to have.

“This needs to be a conversation between the parents and the child,” Brakey said. “Certainly as adults, when you’re eighteen years old, you should have every right to make whatever decision you want. As a general principle, I think that in a free society, we should tolerate people who make different choices than we do.”

He later added that he felt as though “transgender individuals have the same rights and freedoms as all Americans and their rights need to be respected as well.”

Brakey was elected into the Maine State Senate at the age of 26. When elected in 2014, he became the youngest state senator in America. During his four years as a senator, Brakey served as the chairman of the Health and Human Services Committee and was able to introduce and usher through constitutional carry legislation as well as welfare reform. He has dedicated time toward working on increasing access to medical cannabis for Mainers with debilitating conditions.

Prior to running for the Maine State Senate, Brakey was the Maine state director of the 2012 Ron Paul for President campaign.

Dylan Oliver, a third-year student at UMaine and president of the Young Americans for Liberty stated that the group “invited Brakey because they want to host candidates with a spectrum of entirely different views, rather than only liberal or conservative politicians.”

Brakey will be on the ballot as a Republican in the 2020 election for the 2nd Congressional District’s representative position. He hopes to unseat freshman Rep. Jared Golden, who currently holds the position.

For more information about the Young Americans for Liberty, contact Dylan Oliver at dylan.oliver1@maine.edu, and to find out more about Eric Brakey’s campaign, visit https://ericbrakey.com/.