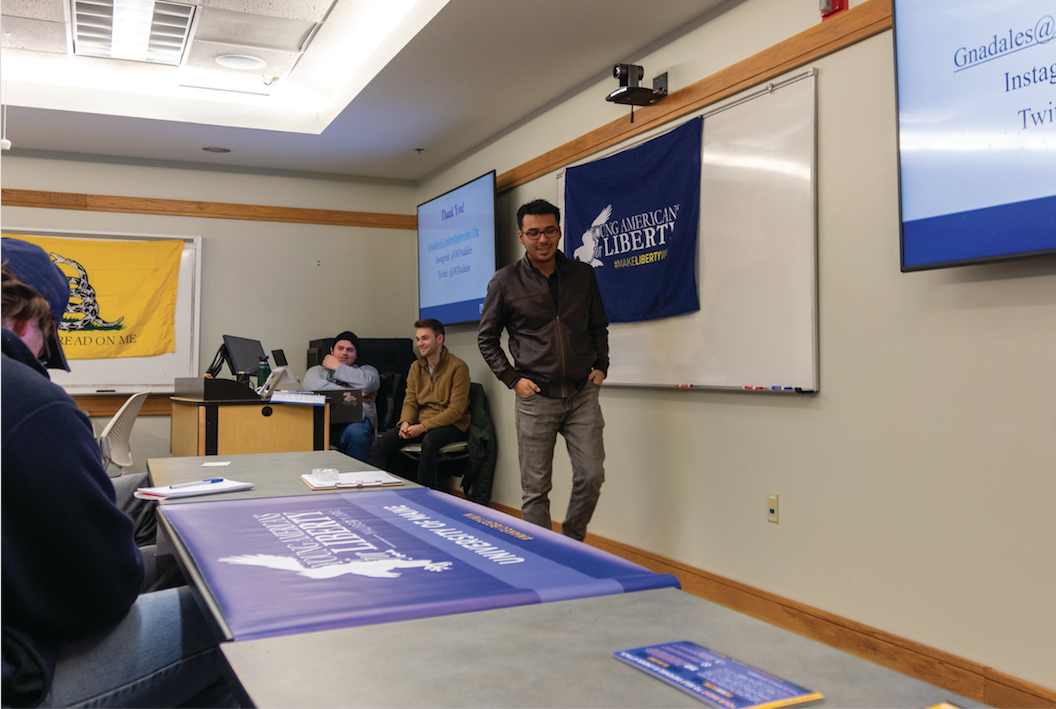 On Feb. 20, the University of Maine’s chapter of Young Americans for Liberty (YAL) hosted Gabriel Nadales, a free-speech activist that works as a students’ rights advocate for the Leadership Institute. Nadales speaks at many universities across America, arguing for peaceful free-speech over political violence, which he does by referencing what he has learned since he started being politically active.

“Antifa” is a political movement that was originally developed in opposition to fascism and far right-wing movements in the 1920s. Overtime, “Antifa” has grown, and the movement encompasses a large number of leftist ideologies, with some members considering themselves anarchists, socialists, communists and others that may define themselves as liberals.

“I’ve noticed that ‘Antifa’ is made up of a lot of different groups that you may not think about being anti-fascists, but nonetheless they wear the black mask, such as the YDS (Young Democratic Socialists of America), [and also] Black Lives Matter,” Nadales explained. Those who identify as part of the “Antifa” movement typically wear dark masks and clothing while participating in protesting tactics.

The movement received lots of publicity in 2017, during the “Unite the Right” white supremacist rally in Charlottesville, Virginia. The counter-protesters were labeled as members of the “Antifa” movement.

Nadales explained that members of “Antifa” protest and conduct activism in a number of different ways, some being peaceful and others involving physical violence, property damage and harassment.

Nadales went to his first anti-fascist rally in 2011 and started participating in activism for the left. Around this time, he shared that he was surrounded by people that were members of “Antifa” and he felt isolated, as these people regarded him as a “capitalist pig,” although he didn’t consider himself a conservative at the time.

Later, Nadales attended Citrus College, where he started a Young Americans for Liberty (YAL) club, as he continued to feel estranged being on a campus that was very much “leftist.”

Nadales and other group members sued the college in 2014 because they felt that their free speech rights were violated. Additionally, the group was threatened to be sued after criticizing the school’s student government and poking fun at one of their policies by making it into a parody. He shared that he was incredibly disliked by peers and faculty at the college because of his involvement in the club and because he transitioned to defining himself as a conservative.

Today, Nadales’s work is inspired by what he feels is a lack of justice occurring on college campuses specifically.

Through the Leadership Institute, Nadales visits universities to speak about free speech and meets with mainly conservative students that may be dealing with issues that violate their freedoms of speech, like the University of California Berkeley incident.

“It doesn’t matter who [you are], if you are a conservative or a leftist, or if you are a whatever, so long as you are exercising your free speech in a peaceful manner, you should have a right to it,” Nadales stated.

Nadales said that it can be very difficult, but students need to peacefully speak up if they feel injustices are occurring on their campus. He recognized that this is most difficult when students feel that their grade depends on agreeing with other students’ and professors’ views. Specifically, he shared that it can be difficult for students to outwardly share their conservative beliefs when the majority of professors are liberals, as he found at Citrus College.

“Liberals have this perception of the most hateful things that conservatives are, which they are not. [Conservative] students have to speak out respectfully and assert themselves and say that ‘we are not like that, we just have disagreements, and they are valid just like yours are’ but do it in a respectful manner so [we can] combat against this. I think that the best thing to fight against hate speech is more peaceful speech,” Nadales shared.

Nadales has appeared on a variety of shows, such as Fox & Friends, and was invited to the White House to witness President Trump sign an executive order to support free speech on college campuses, according to his website.

Nadales is from Mexico City and is currently enrolled at Northwestern California School of Law.