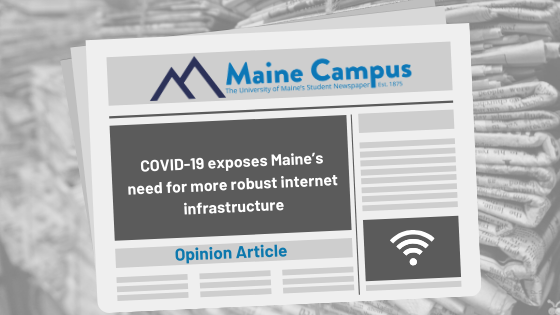 If the coronavirus pandemic has brought Americans’ attention to a specific commodity besides toilet paper, it’s access to the internet. On March 25, University of Maine students and faculty began online classes, joining millions of other students and the majority of America in an unprecedented migration to the internet. While many Mainers may welcome the opportunity to work from home, for others the state’s inconsistent and underdeveloped internet infrastructure may severely hinder their access to work and education.

Even Americans who usually find their internet connection acceptable are expected to face some difficulties. According to the New York Times, broadband infrastructure is suddenly facing steady usage of apps and services generally reserved for classroom and office environments that support lots of data usage. As students and educators both attempt to navigate classes that were never designed to be taken online, finicky connection speeds are likely to plague many a Zoom or Google Chat session and further disrupt a semester that is already spiraling.

While some Maine residents come to grips with their new lives online, others may become even more isolated by infrastructure that hasn’t been updated in decades. According to the Bangor Daily News, Maine is ranked the last state in New England in terms of access to high-speed internet, with some 11% of the population considered “underserved” with regard to connection speeds. These underserved residents are concentrated in rural parts of Maine, with more than half of the residents in Piscataquis and Franklin county dealing with inadequate internet access.

For the record, Maine’s subpar broadband infrastructure is not a result of a lack of effort on the part of the state’s elected officials. Sen. Angus King is a founding member of the Rural Broadband Caucus, which is dedicated to increasing access to high-speed internet nationally. Gov. Janet Mills has also committed herself to guarantee internet access to underserved Mainers, having outlined a five-year plan to expand access throughout the state.

On the flip-side, there has been a good deal of foot-dragging when it has come down to state representatives passing legislation that would bring broadband access to underserved areas. Republican representatives who support expanding broadband blocked a $15 million bond bill last August, objecting to allowing ConnectME, a semi-government agency, to control distribution of the funds. Now, as an internet connection becomes a means of survival rather than a convenience, the state legislature is considering another $15 million proposal, according to Maine Public.
In a remarkable show of solidarity with customers, and/or fear of public retaliation, cable and internet providers have committed to the FCC’s “Keep Americans Connected Pledge,” meaning that, for two months, customers will be exempt from penalties for late payments, with some even providing free access in the same time period for families with students. While it is wonderful that these providers are stepping up for the public good, these steps wouldn’t be so necessary for many residents if state representatives had made the decision to invest in extending broadband to all Mainers before the situation became so desperate.

I am not saying that Americans need broadband in order to prepare for another pandemic I am saying the pandemic has made it clear that reliable access to high-speed internet is a vital aspect of daily life in the 21st century. Peggy Schaffer, the current executive director of the ConnectME Authority, said on an episode of the radio show “Maine Calling” that rural communities in Maine “see broadband as a tool to survive.” The country and this state will get through COVID-19, but allowing Mainers to go without equal access to the internet may prove fatal in the long run.