Enough with the politics, people are dying

Home /Opinion/Enough with the politics, people are dying 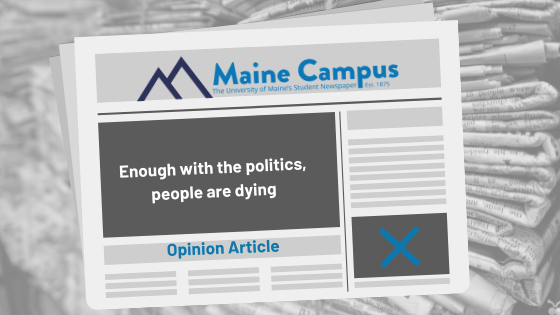 As of March 26, the United States has topped every other impacted nation in confirmed COVID-19 infections. A world superpower that totes its own military as the strongest on earth and its economy as unwavering against all challenges is leading the world in infections of a pandemic that so many other developed nations are handling much better. Maybe the reason this pandemic is already responsible for hundreds of thousands of deaths is that it is being politically weaponized by far-right groups across the globe. There are plenty of reasons why this should be seen for what it is: a despicable act aimed at undermining a society that values human life above differences in race, ethnicity or social class.

Far-right groups in northern Europe, particularly the Nordic Resistance Movement (NRM), have toted COVID-19 as the first step in a total breakdown of society that will eventually lead to a total rebuild of modern society on the rubble of the old one. The NRM envisions a global community ruled by white anti-semites, and they aren’t the only ones who feel this way. Many far-right German groups have used the pandemic as an excuse to call for the sealing of German borders to non-Europeans, while a Ukrainian group claims that the spread of the virus can generally be attributed to non-whites. One neo-Nazi channel exalted the actions of a New Jersey man that coughed on a grocery store employee after claiming to be infected; another encouraged members and followers to cough on surfaces of synagogues. Timothy Wilson was a well-known member of an American far-right group, and was killed in Missouri by FBI agents in an attempt to thwart a conspiracy by Wilson to attack a hospital caring for COVID-19 patients. Wilson had previously made statements explaining the virus was an excuse to kill “our people.”

Even less extreme groups, such as the American National Rifle Association, have been attacking actions taken by local, state and federal governments as excuses to restrict the rights granted to American citizens. Former New York police Chief Bernard Kerik tweeted about the hysteria being created by the media, stating the virus was being used to cover up President Trump’s successes in the stock market. The Dow Jones recently lost almost 10% in one day due to the virus, the biggest one-day loss since 1987. In fact, at one point the market briefly lost all gains made since Trump took office. One pastor closely associated with Trump even claimed that the COVID-19 panic was the deep state’s next play for world domination since the climate change hoax didn’t pan out.

In a time of global panic and pandemic, the last thing our community, whether it be local or international, needs is fear mongering and accusations. To use a disease that has not been cured and stands to kill thousands or even millions more is disgusting; it is inhuman. There is no better definition of filth than those who have used this plague for their own personal gain and progress, and those who have used it to put down others and instill fear in the innocent are just as horrible.