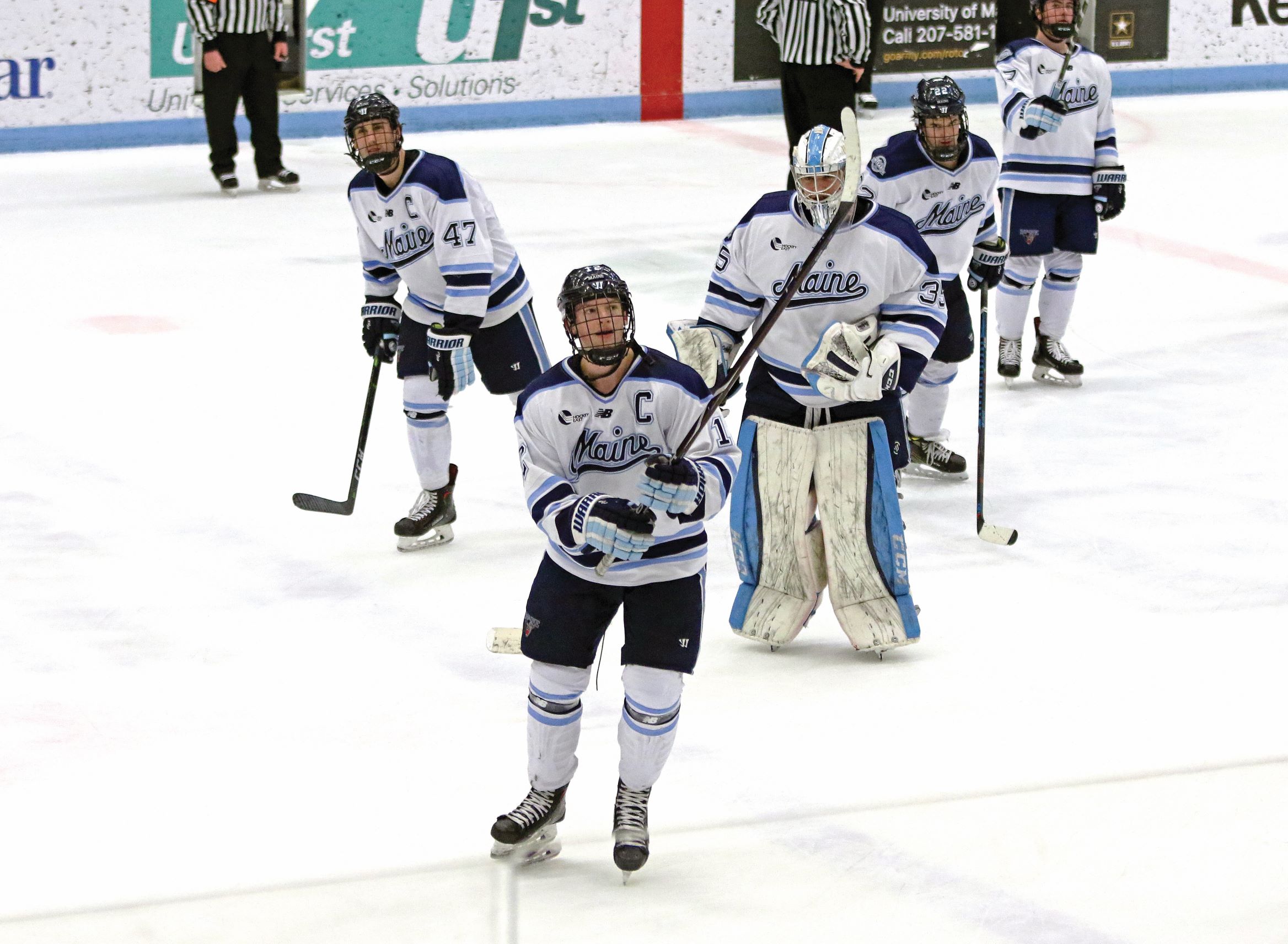 On Friday, March 6, the No. 15 University of Maine men’s ice hockey team hosted the Providence College Friars for senior night in front of a sold-out Alfond Arena. Before the game, Maine honored the six seniors that have been with the program for four years: goalie Stephen Mundinger, forward Patrick Shea, forward Tim Doherty, forward Samuel Rennaker, forward and captain Mitchell Fossier, and forward Ryan Smith.

From the first puck drop, the entire arena could feel the intensity between the two Hockey East opponents on the ice, and they duked it out throughout the first period of action. The Friars took 18 shots on third-year goalie Jeremy Swayman in the opening period of the game, and like a true stalwart, he stopped every single one. Maine took seven shots in the opening period but could not find the back of the net against Providence’s fifth-year goaltender Michael Lackey.

The contest, though scoreless through the first 20 minutes of action, was heated and filled with fast action from both teams. The Black Bears’ penalty kill was perfect throughout the first two periods, killing both penalties called against them. Though they were given opportunities of their own against a short-handed Friars squad, they were unable to generate any cheap goals against Lackey.

In the third period, Maine turned up the pressure, feeding off the growing energy of the home crowd. Doherty, heading deep into the Friars’ zone with third-year defenseman JD Greenway and Fossier, cranked a wrist shot at Lackey that was blocked, but the rebound was scooped up and fed out to Doherty, who found Fossier for the open look on a sliding Lackey. Burying the puck from the opposite slot on an easy shot, Fossier scored the contest’s lone goal.

Swayman had another legendary night, making 48 saves and collecting his third shutout of the season, while Maine only took 24 shots on goal against Lackey. Though the Black Bears’ offense wasn’t firing on all cylinders the entire night, Swayman’s excellence kept them in a position to win throughout the contest. The Black Bears finished the regular season with an overall record of 18-11-5 and a record of 12-9-3 in Hockey East matchups.

The Black Bears winning this game, combined with the University of Connecticut losing to both UMass Amherst and UMass Lowell, Maine has moved into the fourth seed within the Hockey East and secured home ice to host UConn for a first-round home playoff series.

Maine will take on UConn next Friday, Saturday and Sunday, March 13-15, in a best of three series. Maine is 1-2-0 against the Huskies this season, beating them 1-0 in overtime then losing to them 3-2 in each of the other two games. Boston College will be the No. 1 seed in the tournament followed by UMass Amherst in second and UMass Lowell in third. The University of New Hampshire finished in the ninth spot and will be watching the playoffs from home.