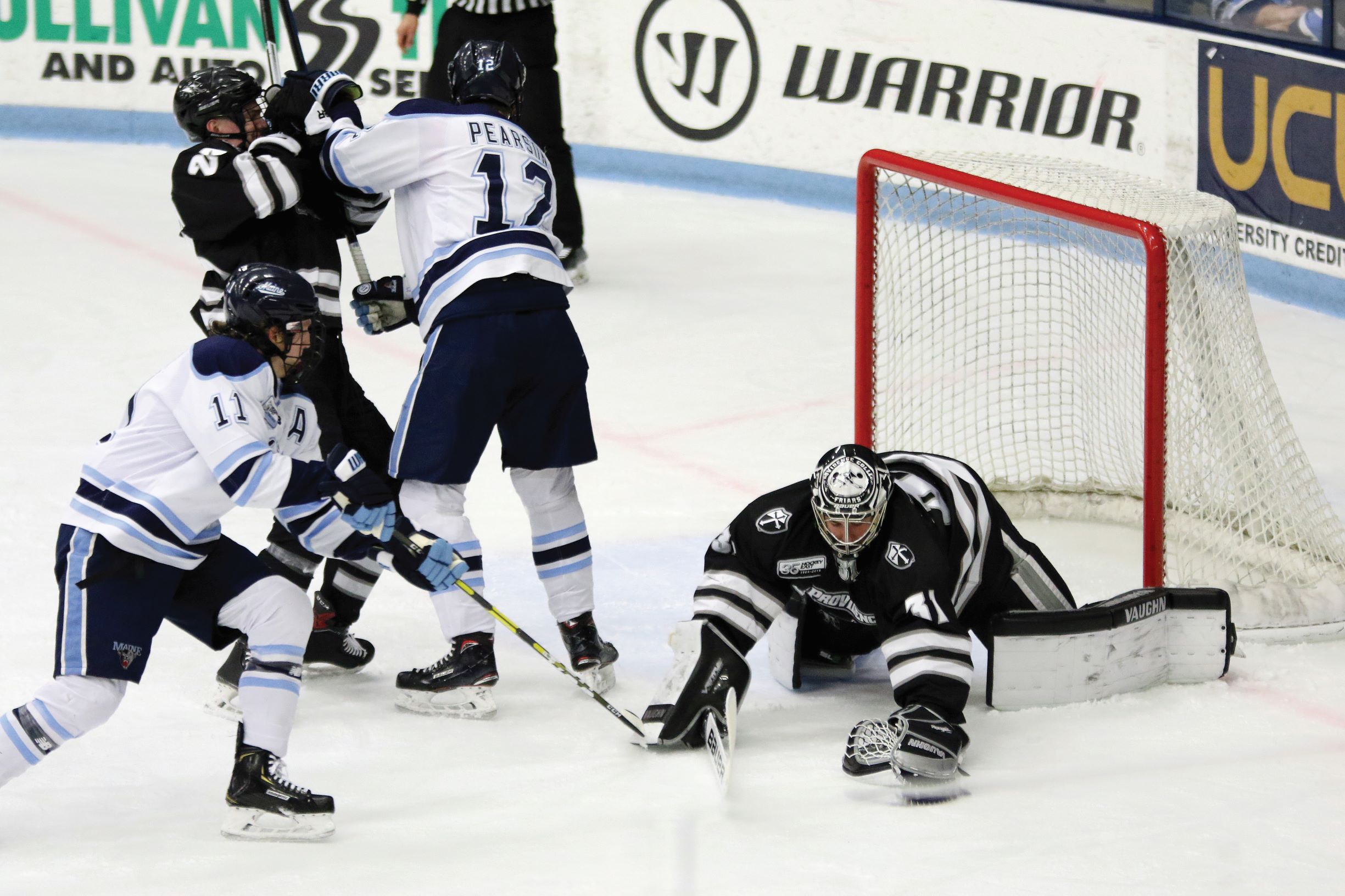 The University of Maine men’s hockey team traveled down to Providence, Rhode Island to take on the Providence Friars for a one-game weekend, with the second game of the series to be played in Orono on Friday, March 6. Since the No. 15 Black Bears were in town, the No. 19 Friars buckled down for a highly anticipated contest with serious playoff implications, as the now fifth place Black Bears currently only hold a three-point lead over the sixth-place Friars in conference standings.

The first period started off with both squads trading charges into each others’ zones. Second-year forward Adam Dawe, third-year forward Eduards Tralmaks, and second-year forward Jacob Schmidt-Svestrup all managed to crank out shots on Friar’s fifth-year goaltender Michael Lackey, but none were able to get past the veteran stalwart.

Maine’s initial volley of shots was matched by the Friars, but third-year goaltender Jeremy Swayman was left relaxing in the goal as shots went wide or were blocked by his defensemen. After about five minutes of play, with both teams trading lines, the Black Bears were seemingly overwhelmed, with the Friars controlling the puck for a consistent five minutes, firing eight shots on goal with a slew of additional shots going wide. Swayman, a seasoned veteran in the net himself, made several crucial saves and deflected everything sent his way, keeping the Friars off the board while Maine’s offense regained their footing.

A tripping penalty on Friars second-year forward Jack Dugan sent Maine onto the power play,  but even with the man advantage, Maine continued to struggle to generate offensive pressure in Providence’s zone. Tralmaks managed to take the lone shot on goal during the power play frame, with Lackey making an easy snag on the wrist shot. As Dugan completed his penalty, he tore onto the ice and stole the puck from Schmidt-Svejstrup, then proceeded to deke out Swayman in the one–on–one situation for the unassisted tally.

Maine would give up a power-play opportunity of their own to the Friars, as third-year defenseman JD Greenway was called for interference with five minutes left in the period. A slew of shots from the Friars kept Maine’s defense on their toes, and the Black Bears defended their net admirably until they were back to full strength. Dugan couldn’t stay out of the penalty box for Providence, scoring another trip to the sin bin for roughing and additionally hitting after the whistle, all before the buzzer had sounded to end the first period.

Both teams traded shots consistently through the second period, but strong goaltending from Swayman and Lackey kept the score 1-0 through the majority of the period. With just five minutes to go before the second intermission, Lackey saved a shot from fourth-year forward Mitchell Fossier and threw the puck out to fourth-year forward Shane Kavanagh. Kavanagh, along with first-year forward Albin Nilsson and third-year forward Jason O’Neill, took off down the ice toward the Black Bears’ zone. Catching Maine in a line change, the three traded the puck amongst themselves in an effort to confuse the two Maine defenders in front of them, and their tactic gave O’Neill a clean shot against Swayman, which he buried over the goaltender’s stick-side shoulder.

Just as quickly as Providence had extended their lead, the Black Bears found their way onto the board. Dawe fought for the puck on the ensuing faceoff with aggression and fed the puck toward Lackey. Schmidt-Svjestrup scooped up the loose puck and fired a close-range shot at Lackey, who deflected it, but the puck landed right in the proximity of first-year defenseman Adrien Bisson, who promptly buried the puck behind a scrambling Lackey.

Providence took back to the ice with intentions of extending their lead once more and made quick work of the Black Bears’ initial efforts. Second-year center Tyce Thompson beat Maine’s fourth-year forward Ryan Smith with ease on the opening faceoff, tearing down into the Black Bears’ zone and firing off two quick successive shots at Swayman. The second rebound was corralled by third-year forward Greg Printz, who buried the puck with an easy slapshot over the recovering Swayman for the lead extending goal.

Maine, trying as hard as they did, couldn’t seem to find a way past Lackey for the majority of the third. Though fourth-year forward Tim Doherty won the Black Bears a multitude of faceoffs in the Friar’s’ zone, Providence played tight defense and protected Lackey with efficiency. Eventually, the relentless offensive pressure proved to be too much, as a deflected shot from third-year forward Veli-Matti Tiuraniemi bounced off of third-year forward Emil Westerlund’s skate and went into the net. After the referees elected to review the play, the ruling of a goal was upheld.

Providence rode out the final minutes locking down their defensive end, stopping multiple volleys of the Black Bears’ slapshots and wrist shots alike en route to their 3-2 victory over Maine.

Swayman collected 30 saves on the night while Lackey tallied 24 for Providence.

With Maine losing to Providence, the Black Bears fall to fifth place in the Hockey East standings, with three points separating second through fifth place. Maine currently holds a two point lead over the Boston University Terriers and the Providence Friars and looks to be slated to travel for their first playoff game to Connecticut so long as they show out in their final regular-season contest against Providence. If Maine manages to secure the fourth seed in the standings, with a victory over Providence and a Connecticut loss this weekend, they would likely host the Huskies or potentially the Terriers, depending on how the final weekend of the regular season plays out. In 2017-18 Maine hosted rivals UNH for the first round of playoffs where they swept them in front of an electric Alfond Arena Crowd. That same postseason, Maine fell to the Providence College Friars in the quarterfinals to end their playoff run. In the 2018-19 season, Northeastern University swept Maine in the quarterfinal round of the Hockey East playoffs. The last time Maine won the Hockey East Championship was in 2003, when they ended the season with a 1-0 loss to Denver in the National Championship. The Black Bears have shown they can win in many ways, and if their lines are firing on all cylinders, there’s little doubt that Maine will make a deep run into the playoffs.