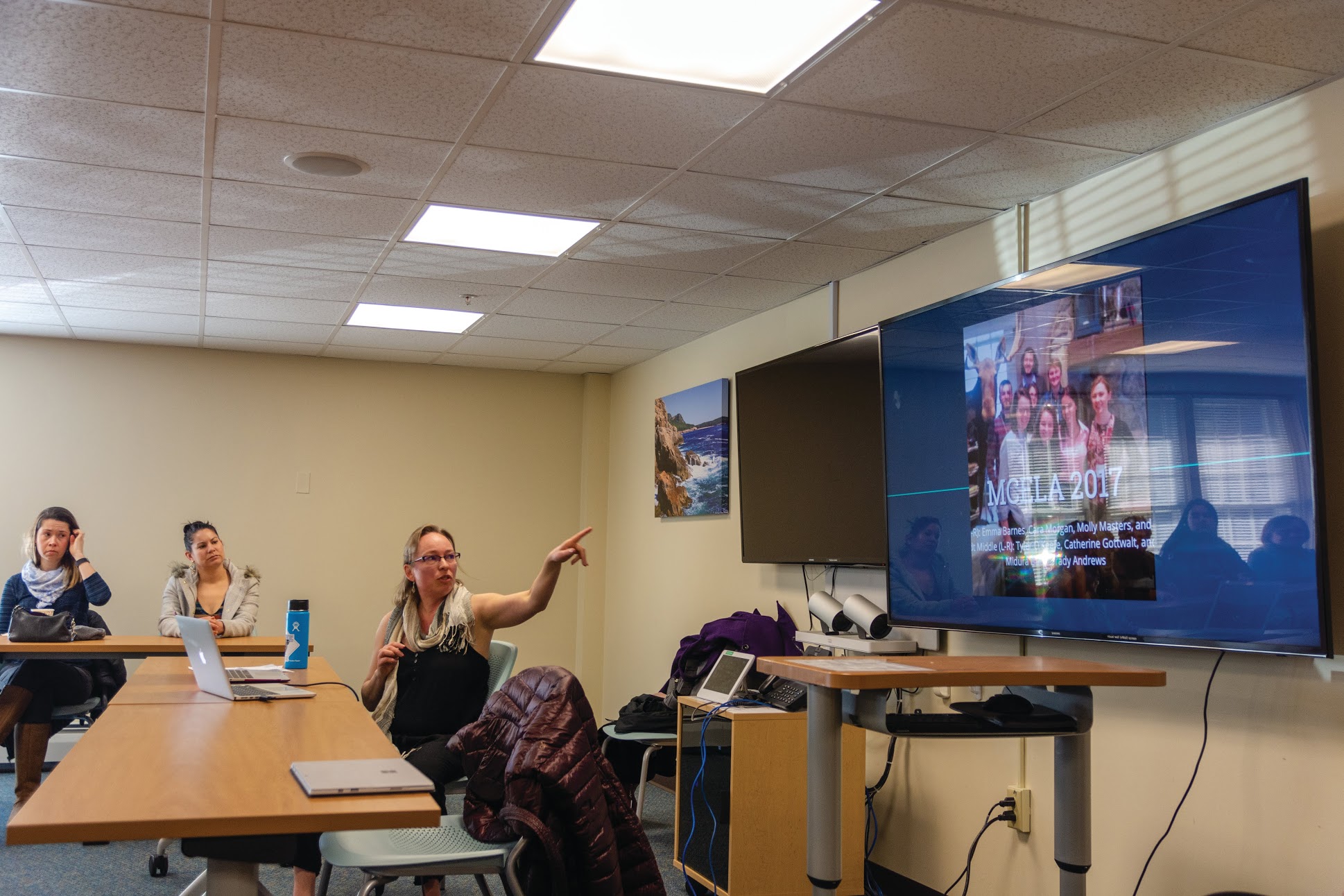 Paige Mitchell, Ph.D. candidate and director of the Writing Center at the University of Maine, presents her experiences about helping women feel empowered and confident. She also spoke on her experience with teaching composition courses to women at the Penobscot County Jail. Photo by Antyna Gould

On March 7 in the Margaret Smith Policy Center of the York Complex, Andrea Mercado and the American Association of University Women (AAUW) hosted a panel discussion titled, “Supporting Diverse Women’s Life Experiences.” Featuring three panelists’ presentations and a question and answer style discussion, the event lasted for over two hours and allowed community members to interact with women who each had unique experiences.

Mary Cathcart, a member of the AAUW Penobscot Valley Branch, began the event with an introduction and explained the goals and purpose of the AAUW organization, which was founded in 1865. The organization helps to put on events and raise money for scholarships for college-aged women. It also provides funding for different women’s organizations. Many of the women involved in the organization were present at the event to answer questions.

“It’s so important to celebrate people of diversity on campus and in our community,” Cathcart said. “One of our goals is to advocate for women and girls, particularly in education.”

The first panelist of the discussion was University of Maine Professor Paige Mitchell. Mitchell presented on “Dolls and Divas: Women and Self-Actualization.” She reported her findings that she has discovered through research, as well as from working with both university women on campus and with incarcerated women from the Penobscot County Jail. She is currently pursuing a Ph.D. through the university while also working in the English department’s Writing Center, training students to become peer-tutors, and teaching English 101, among other courses.

Her work focuses on how terms used to describe women, like “mistress” and “diva,” now have negative connotations and are no longer terms of power and strength as they once were. Mitchell described her different experiences working with women who come from different backgrounds and socioeconomic status, and how this impacts them in various settings among peers, whether it be in jail or in the classroom.

Catalina Piedrahita was the next panelist to join the discussion. She spoke at length about her job at Preble Street, working in anti-trafficking services as an intensive case manager. Originally from Columbia, Piedrahita worked as a physician before she came to America and decided to help victims and survivors of trafficking.

Preble Street works closely with labor, domestic servitude and sex trafficking victims, and is a non-profit organization that helps to provide housing, clothes, food and safety for victims who want to escape. Preble Street has a main location in Portland, and also has locations in Lewiston and Bangor, where Piedrahita currently works.

The last panelist in the discussion was Cheryl Golek, a mother of three who discussed her struggles growing up in poverty in rural Maine and the cycle of generational poverty that plagues many families in America. She was able to overcome obstacles and was introduced to a job opportunity that allowed her to co-found The Vicarage by the Sea in 1998, which is an alternative care home for adults with dementia. Golek raised two of her children as a single mother in low-income housing for many years of her life and is now working to end the stigma around struggling families who use social services resources such as Section 8 housing vouchers, food stamps, medicare and more to survive.

“The people in poverty in this country aren’t broken. It’s the system,” Golek said. “As a society, we assume people are poor because of the choices they make; that’s not it. People who are in poverty should be more educated and informed of social services resources, and shouldn’t have to find things out for themselves.”

To get in contact with the AAUW or join their organization, visit penobscotvalley-me.aauw.net.