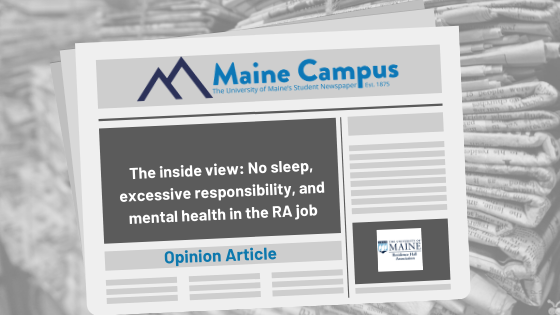 For both summer and winter training, Resident Assistants (RAs) spend about eight hours in scenarios called Behind Closed Doors (BCDs). These BCDs allow RAs to get practice responding to real-life, worst-case scenarios. Although about half of all BCDs address issues like underage drinking or noise complaints, one day of training is devoted to scenarios concerning mental health, suicide ideation or sexual assault. These BCDs prepare each RA to respond to situations that most people might not know how to handle, but they do nothing to prepare an RA for how to take care of their own mental health.

With all that University of Maine RAs have to handle, work days can get long fast, and unlike other jobs, there are no weekends, as supervisors require RAs be accessible to their residents 24 hours a day. Each RA gets only four days off per month, which they have to apply for at least two weeks in advance. So, it isn’t much of a surprise that most RAs interviewed by the Maine Campus claimed that their mental health, or that of others on their staff, was negatively affected by the job they work.

RAs cited a lack of sleep, inconsistent discipline and being overworked as some of the main factors detrimental to their own mental health. In fact, the Department of Residence Life has been adding even more work to the already heavy burden in the form of monthly programs for each floor in addition to Friday night programs led by the on-duty RAs. These monthly programs usually take place around the same time as programs led by UMaine Campus Activities and Student Engagement, which naturally has a larger budget and draws in more students. This is unfortunate for RAs, whose efficiency is quantified by the number of residents who attend their programs. Personal experiences and interviews with other RAs reveal that ResLife often blames the RAs when fewer residents participate in events.

This applies to things like one-on-ones as well, in which RAs are blamed by supervisors when residents don’t attend their meetings. Situations like these, where RAs face discipline like verbal warnings or probation for things well out of their control, can weigh heavy on an RA whose floor isn’t particularly social, or doesn’t spend much time in their hall.

ResLife’s handling of mental health isn’t all bad, though. RAs found that their direct supervisors were more sympathetic with their employees facing issues regarding mental health, but were limited in their capacity to help. Outside of a slight priority with Cutler Health Center’s counseling service, RAs aren’t offered any special resources to deal with the high stress of their jobs, and some feel that confiding in their supervisors might come with an added threat of removal from the position.

One RA stated that they felt trapped in their room. Another said that the job just isn’t worth it. Even during ResLife training, only about an hour every semester is devoted to helping RAs maintain their own mental health.

Overall, there is a lot of room for improvement when it comes to mental health in ResLife. Although direct supervisors attempt to assist the RAs they serve the attitude toward the RAs has been described as more passive, referring them to Cutler as if their wellbeing isn’t the responsibility of their employers. And, it is no surprise that RAs feel this way; when asked about the job, one RA, who wished to remain anonymous, said there wasn’t enough freedom to remain an RA next semester, and others have said that pro-staff would fire them for telling the truth about the job or protesting nonsensical demands.

The stress of the job is much higher than most jobs on campus, and it is invisible to most. The stereotypes of RAs that some residents perpetuate, such as heartless and unforgiving, can also add a little more to the mental burden of the position. The reality of it is that a lot of RAs just want their residents to be safe; they don’t get into the job just to bust people for drinking. But, the pressure from above is too much. There is a lot that the RAs at UMaine handle, and the Department of Residence Life just isn’t doing enough to help them manage the stress of it all.

With print on the edge, papers must generate subscribers or perish
Zach Wyles announces bid for UMSG vice president position