Maine is developing too much affordable housing

Home /Opinion/Maine is developing too much affordable housing 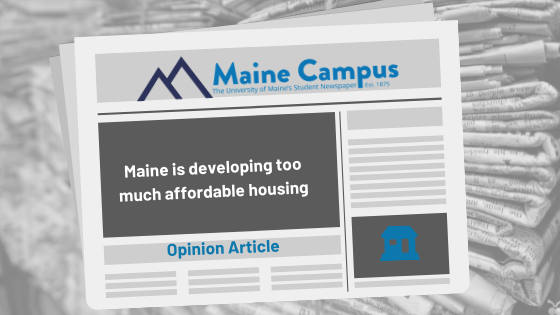 In Maine and across the nation, policymakers have worked to create more affordable housing. This February, the Maine State Legislature enacted a bill which will create an $80 million affordable housing tax credit. The Maine State Housing Authority will now be able to issue as much as $25 million annually into creating and supporting affordable housing for seniors, individuals in rural areas, and low-income individuals. The Portland Press Herald states that last December, Maine’s Housing Department issued $6.8 million to create 275 new affordable-housing units in central and southern Maine. In Bangor, affordable housing apartments are being constructed near Essex Street and Grandview Avenue.

The Environmental Protection Agency (EPA) states that the U.S. has faster land development rates than population growth rates. While there is a housing shortage, it is unsustainable to develop land at a faster rate than the population is actually growing. This urban sprawl is abundantly clear in Maine.

In the Bangor region, rural areas and other parts of the state, land areas that were once forested, fielded, agricultural or only partially-developed now have abundant housing. The EPA reports that this rapid urbanization increases per capita air pollution, total waste and sewage, chemical usage and land needed to create parking. Clearcutting areas for housing destroys ecosystems, encroaches upon wildlife habitats and results in more wild animals in residential neighborhoods.

The U.S. Census Bureau shows how population density has nearly doubled between 1950 and 2010. Maine’s efforts to increase affordable housing only contributes to an unsustainably high level of urban sprawl, which poses environmental and health hazards.

The Maine Housing Authority’s (MHA) new $80 million tax credit will devote between 30-50% of the credit to affordable housing for elderly and/or rural populations. This means that the MHA could spend as much as 50-70% of its funds to provide affordable housing for low-income, urban populations. Devoting such a copious amount of funds will not result in economic growth.

Another problem in Maine is that young people often move to other states. The Maine Wire describes how Maine’s lack of quintessential employees is worsened by both a lack of economic stimulation and overly high or complex taxes in Maine. These tax credits to be issued to low-income individuals and landlords will only create a larger tax burden for Maine’s working-class people. Higher taxes for Maine’s workers will not encourage young people to stay in Maine.

Editorial: College students need aid more than ever, yet are left out of COVID-19 stimulus program
The Weeknd’s new album provides solace during hard times