Editorial: Whether the return to campus is perseverance or ignorance will be up to UMaine’s students

Home /Opinion/Editorials/Editorial: Whether the return to campus is perseverance or ignorance will be up to UMaine’s students 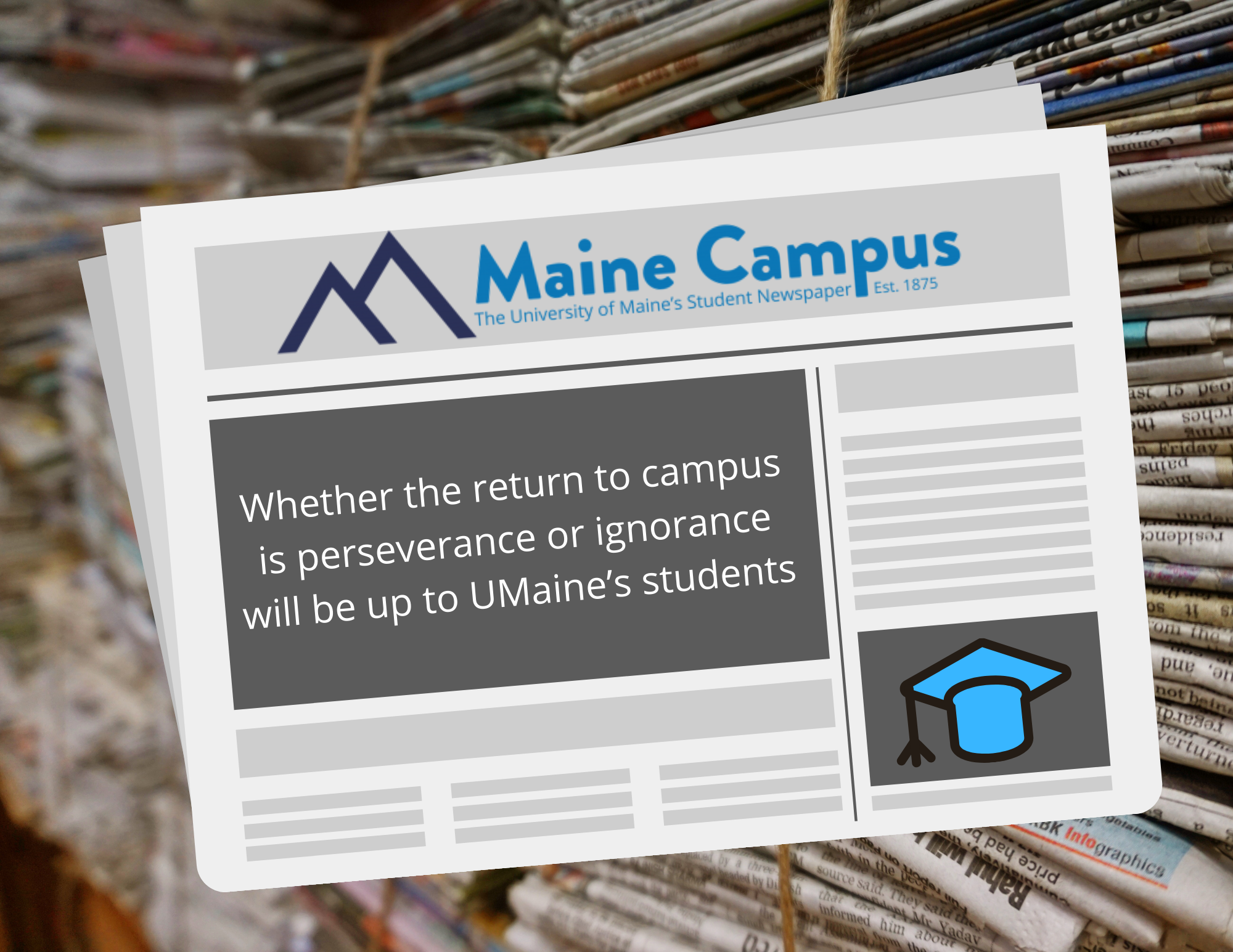 In a bittersweet turn of events, the University of Maine has somehow found itself an outlier in a developing story of college-reopenings-turned-outbreaks across the country. The New York Times reported on Saturday that there have been rising infection rates in about 100 college communities across the country, meanwhile UMaine’s case count tallied out to eight at the end of the first week of classes. While this early outcome is encouraging, students must continue to rise to the occasion to prevent the Orono and Old Town communities from becoming another demerit on a list of failures.

When discussing the responsibilities that students bear in the new pandemic reality, it is important to recognize that they are not just beholden to the university, but also to the Orono, Old Town and Penobscot Nation communities that would be at the greatest risk if there were to be an outbreak. Naturally, many individuals in these communities are concerned and even alarmed at the prospect of the campus reopening, such as Roberta Bradson, owner of The Store Ampersand in Orono. During an interview with WABI back in August, Bradson remarked that her business does not depend on college students and expressed concerns that the influx of thousands of people from out of state might actually scare away many of her older customers.

Despite these concerns, many other individuals in the community recognize that students and university events are vital pieces of the local economy. In another interview with WABI, The Family Dog owner Luke Wardwell acknowledged that businesses like his “need college to get through our year.”

As if the economic pressures were not enough, much of the burden has been put on these local businesses to make sure that patrons are abiding by Gov. Janet Mills’ executive orders and Orono’s ordinance on social distancing. The emergency ordinance, passed by Orono’s town council on Aug. 26, requires that individuals wear facemasks while in indoor public spaces and when closer than six feet to others while outdoors. The ordinance is a direct reaction to local anxieties regarding the arrival of students, as it also requires that off-campus housing complexes, such as The Ave, Orchard Trails and The Reserve, create COVID-19 prevention plans and submit them to the town.

Some students might argue that they should be allowed to socialize more, that on-campus policies shouldn’t be so strict. Maine has one of the lowest positive test rates in the country, and after the university’s successful first two phases of testing one could be forgiven for thinking they might let their guard down.

New York also had a very low infection rate, right around 1%, and some students at the State University of New York at Oneonta thought they could let their guard down. The New York Times reported that just over a week into the semester five students had been suspended for holding parties, and the university had 500 positive cases on its hands. The campus was shut down shortly thereafter.

However, UMaine has taken multiple steps that campuses such as that at SUNY Oneonta did not. Namely, the university required and provided testing for all out of state students, on-campus residents, and staff members. Leaders at UMaine and in the surrounding communities have worked together in order to allow students to return to campus and enjoy some semblance of a college experience. The president, the dean of students, the Orono and Old Town administrators, and all the other community leaders have, at this point in the process, held up their end of the bargain.

Forget vague entreatments to 18-year-olds to exercise foresight and self-responsibility, the fact of the matter is that every single student, whether they read it or not, signed a contract. It’s more of a pact, the Black Bear Pact, and it’s very simple: Protect yourself, protect others and protect “the college of our hearts always.” It’s cheesy, but it includes very specific instructions for students to effectively hold up their side of the bargain to the greater community.

If the university succeeds in holding COVID-19 at bay, then it will become a success story. Someone will write about it, and there will probably be a few very nice speeches involved. If the university fails, then we will have effectively betrayed the trust of the community, and the New York Times will write us in just under SUNY Oneonta.

The first week is over. Now it’s time to see if Black Bears really do care.