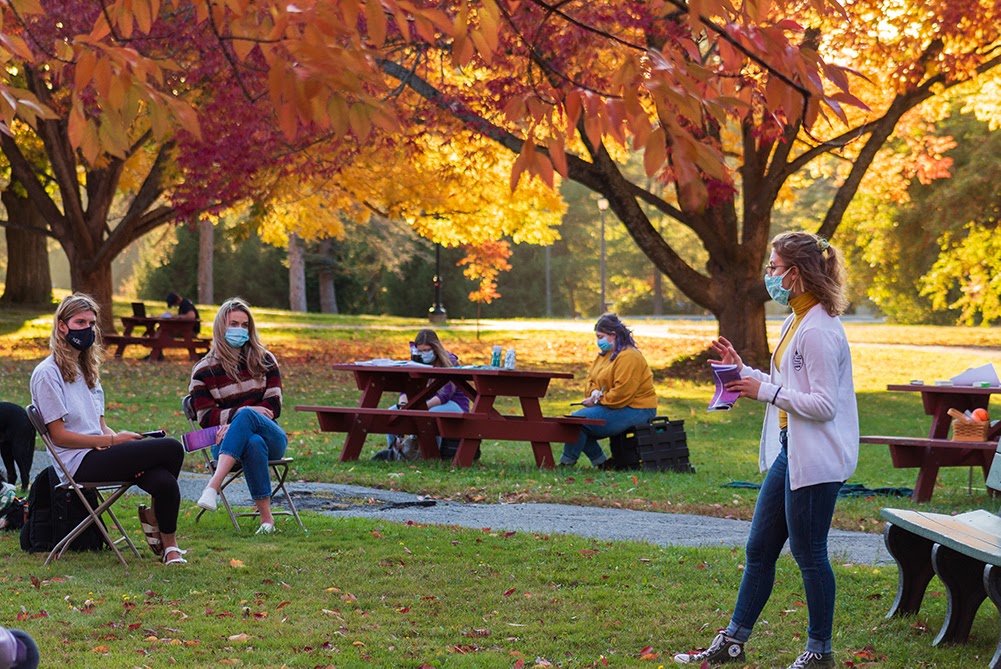 On Oct. 1, the University of Maine’s All Maine Women hosted the annual Take Back the Night event to both spread awareness and create a safe space for those who have experienced domestic and sexual violence. Held behind Fogler Library with COVID-19 restrictions in mind, attendance was capped at 50 with respective social distancing guidelines. This event lasted for two hours between 5 and 7 p.m. and featured both a performance from UMaine’s Renaissance all-women acapella group and multiple speakers sharing their stories within a non-mandatory reporting space.

This year, fourth-year secondary education and honors student Miranda Snyder took a key role in organizing the event as the All Maine Women president, with the goal of representing a much more culturally diverse population of sexual and domestic violence survivors than in previous years and taking care to include notable speakers and various collectives on campus before the survivor “speak-out” closing portion.

“We read an explicit land acknowledgment statement, that the UMaine campus was on stolen Wabanaki territory,” Snyder said. “We were able to have a few new speakers, such as Dawn Neptune Adams, share how sexual violence impacts their communities.”

As both a first time speaker at this event and a notable activist within the realm of indigenous and racial awareness, Adams drew relationships between sexual and domestic violence advocacy and speaking out against the discussed stolen Wabanaki territory introduced at the beginning of the event.

“It was wonderful to get [Adams’] perspective and their political activism, and hearing about us being on stolen land, relating directly to the violence survivors’ feelings of autonomy and agency over their own bodies,” Snyder said. “It was very insightful, empowering and enlightening.”

For first-year students, Miranda noted that although this year’s turnout was smaller than in years previous, it only brought the crowd closer together, creating a tight-knit, safe, shared space which built a strong community between both the featured speakers and active listeners who were involved.

“We had a few [first-years] who came after receiving advertisements from UMaine’s Women’s Gender and Sexuality Studies program and said they realized there was an activist community that validated how they felt and what they’ve experienced on campus,” Snyder said. “Also, first-time guest speakers expressed a lot of gratitude for us even holding the event given the modifications we had because it really set the [precedent] that no matter the circumstances, this event, and the experiences of the people honored in it, are still worth the attention.”

Especially during the time of a pandemic, those who are both currently experiencing sexual and domestic violence and those who are moving through their healing process can feel isolated and unseen. Events like Take Back the Night help to spread awareness of people living in these unsafe situations, maybe with abusive partners. To hear others share their story and build a community helps, at least a little, to demonstrate that they are not alone.

“One of the core goals of the event is just to raise awareness. [This] stat is flawed since not everyone reports, [but] at least 1 in 5 women experience sexual assault during their lifetime, which does not account for nonbinary or [transgender] folks, or differentiate between people of color or socioeconomic positions,” Snyder said. “The power of sharing one’s story for advocacy [helps tremendously during one’s healing process]. If you are comfortable with sharing your story, sometimes sharing it with others is one of the most empowering things you can do for yourself and others.”

For on-campus resources regarding sexual and domestic violence, UMaine’s Cutler Health Counseling Center has a variety of resources, and can be found at umaine.edu/counseling or by phone at (207)581-1392. Other resources may include UMaine’s on-campus Title IX services at umaine.edu/titleix, or off campus, Partners for Peace at partnersforpeaceme.org and Rape Response Services at rrsonline.org.