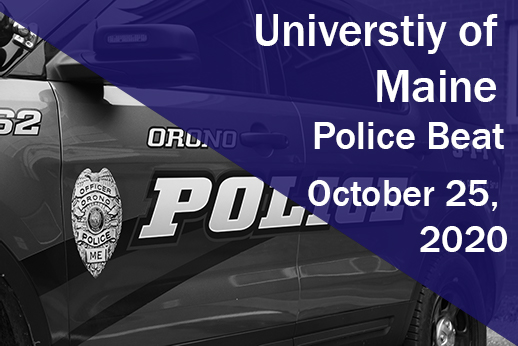 At 11 p.m. officers from the University of Maine Police Department (UMPD) were called to the first floor of Oxford Hall and found a student smoking marijuana in their room. They were found to be in possession of a usable amount of marijuana and were referred to conduct.

At 9:55 p.m. Skyler Porter, 23, of Bangor was charged with assault and violation of conditional release.

After midnight UMPD officers were called to the first floor of Oxford Hall where they found Brayden Cole, from Kittery smoking hashm, a form of marijuana concentrate. He admitted to drug usage and UMPD confiscated his drug paraphernalia as well as issued a summons for the use of drug paraphernalia.

At 2:17 a.m. Ryan Vickery, of Orono, was charged with two counts of assault.

UMPD received a report that property damage happened on the Hilltop quad overnight.

At 4 a.m. UMPD was called to the Hilltop quad for a complaint of criminal mischief and property damage. A male student had flipped a bike rack, removed manhole covers and destroyed several picnic tables. He was caught on surveillance video and referred to conduct.

At 12:42 p.m. a female student was captured on security cameras tearing down Turning Point USA flyers in the Memorial Union. UMPD is actively investigating this case and is planning to circulate the video footage on its Facebook page to identify the woman.

UMPD conducted an ‘operating under the influence’ arrest on Rangeley Road at 12:33 a.m. Dylan Beers, a first-year student from Brookfield, Connecticut living in Cumberland Hall, was going the wrong way on a one-way street with no headlights on. He was driving the car intoxicated and failed his field sobriety test so he was transferred to Penobscot County jail for a Breathalyzer test, which he also failed. In the car with him were his girlfriend, who is not a student, and a fellow UMaine student.

At 1:10 a.m. Kenneth Dare, 20, of Old Town was charged with illegal transportation of liquor by a minor

At approximately 2:30 a.m. a UMPD officer was on patrol and came across a car in the Aroostook parking lot with four first-year students inside. They were smoking marijuana and they were in possession of alcohol. Although one student did have a medical marijuana card, all of the drugs and drug paraphernalia were taken and the four students were referred to conduct.