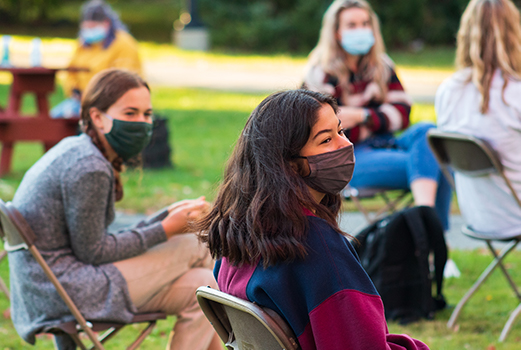 On Friday, Oct. 9, the University of Maine Institute of Medicine gave a virtual presentation on cellular and molecular determinants of fatal viral infections. The presentation was held over Zoom as a part of UMaine Medicine’s Fall 2020 Seminar Series and focused on the JC Polyomavirus. Melissa Maginnis, a professor of microbiology at UMaine with a research focus in virology, gave the talk.

Maginnis opened the presentation by talking about several well-known viruses that have affected the world in recent history. These include the Zika virus, COVID-19, Ebola, Measles, Influenza and HIV. However, the main focus of the presentation was on JC Polyomavirus (PCPyV). This virus is a small, non-enveloped virus that infects anywhere from 50-80% of the population, creating a lifelong, persistent infection in the kidneys. Individuals are often infected through peroral transmission, which then creates a subsequent transmission in the kidneys, creating various symptoms such as partial paralysis and cognitive impairments. After the significant infection has occurred, JC Polyomavirus can cause progressive multifocal leukoencephalopathy (PML) in the brain. What this means is that oligodendrocytes as well as astrocytes deteriorate in the brain, causing permanent damage.

“There are many dangers here because there are limited treatment options for PML, that is why looking for causes is so important,” Maginnis stated.

The talk also touched on the subject of immunosuppressants, which have the ability to lead to an increased risk of PML, as seen on black box labels by the Food and Drug Administration. The talk then shifted to how JC Polyomavirus targets cells. It has been found that the virus targets serotonin receptors, which are known to activate signaling events in the brain, as well as affect mood and behavior. By using the super resolution imaging technique known as fluorescence photoactivation localization microscopy (FPALM), researchers are able to localize molecules using photoactivatable fluorophores at a resolution of 10-30 nanometers (nm). At this resolution, researchers were able to look at healthy cells and compare them to cells that they infected with the JC Polyomavirus, and witness how they react. By looking at this, Maginnis and her team were able to observe virus and host cell interactions and break those interactions down into the different kidney cell types. What they found was that JC Polyomavirus is able to reprogram host cells due to rapid replication. They are able to make antigens, which split into viral DNA replication and then move into viral protein replication as well. By observing this process, they also found that the JC Polyomavirus late gene was expressed delayed in primary astrocytes. Finally, they found that the Mitogen Activated Protein Kinase (MAPK) signaling pathway was what was used by the JC Polyomavirus to help take over the cell. The MAPK pathway is a pathway of chain proteins that is used to help send signals from the receptor on the surface of the cell’s DNA to the nucleus.

Maginnis and her team’s study has given us a better understanding of viruses and how they work in hosts. By understanding how these diseases work in the human body, the right steps can be taken in preventing them from attacking the body or preventing them from spreading further. While the work here is incredibly impressive, there is definitely more to see from this team in the future, and even more studies to be run.