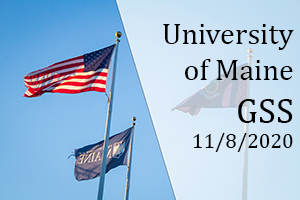 The meeting minutes were approved. Women and Business, a club focused on bettering the experience of women in the Maine Business School, was approved for preliminary recognition.

Vice President Zachary Wyles reminded all the senators to vote in the United States election if they had not already done so. The Robert’s Rule workshop will be happening later in the year at the senate’s leadership conference, rather than held exclusively by the school. President Pro Tempore Peter Alexander thanked the senate for their patience during President Harrison Ransley’s absence. Vice President of Financial Affairs Jacob Tauke announced that the student government has $221,338.81 of unallocated funds. Allocations need to take place, which will be discussed in the executive session along with topics pertaining to the University of Maine Renaissance and UMaine Outing club. Vice President of Student Entertainment Chase Flaherty announced that the final act of The Maine Event will be Chloe Fineman. The entire tour has been going well, with greater reception given to the second half of acts. UMaine is also launching an on-campus streaming service through Apogee.

The Representative to ROTC Austin Westfield brought up recruits who are concerned they will face possible backlash over election results and urged senators to report harassment if they saw it. This warning was given due to certain behaviors exhibited on campus during the previous presidential election.  Director of Communications Danielle Jarosz has continued to work with Flaherty as they try to recruit more senators.

The Membership Committee has been continuing talks with Wyles about the senate retreat. The merchandise order for the senate has also been placed. The Committee of Policy and Procedure discussed and voted on amendments that recognize international student organizations as official in their constitution. There is also an investigation underway to find out why that wasn’t already the case.

The Board of Commuter and Non-Traditional students said that the Black Bear Exchange shopping trip went very well. They plan on making another trip in about two weeks. The Honors College Student Advisory Board is trying to get approval for in-person office hours or a hangout space for Honors students to enable more interaction. They plan on doing a resume building workshop near the end of the year. Interfraternity Council will be holding elections soon for a new president and will coincide with the election for Panhellenic Council on Nov. 19. The Panhellenic Council is wrapping up interviews for the upcoming executive board. The Senior Class Council reports that the class of 2021 Instagram has been created and urged senators to follow it.

Wilde Stein is working on a vigil for the Transgender Day of Remembrance. The club is hoping to make this an outdoor event.

The senate passed an act to modify financial policy for funding apparel for organizations.

The senate then entered executive session, and shortly after, the senate adjourned.