‘Surviving Anecdotes’ showcases the artwork of UMaine seniors during the pandemic 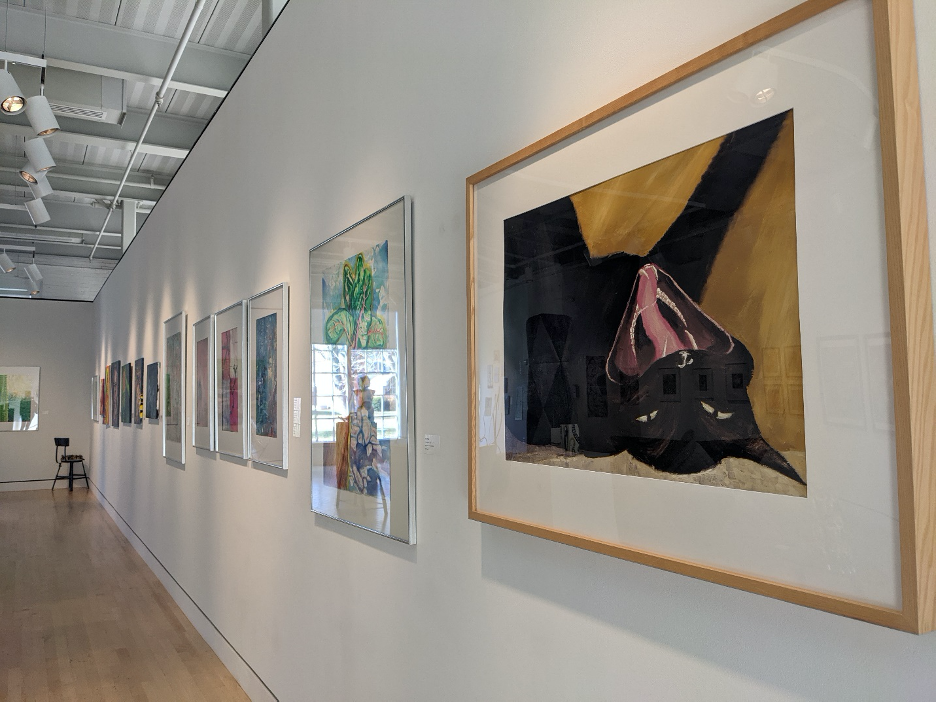 The University of Maine’s 2020 senior art exhibit, ‘Surviving Anecdotes,’ features a variety of artwork by 16 students in the Lord Hall Gallery until Nov. 12, 2020. Photo by Meaghan Bellavance.

On exhibit until Nov. 12 in the Lord Hall Gallery was the University of Maine’s 2020 senior art show, “Surviving Anecdotes.” The gallery featured 16 students in a variety of mediums. From polished steel sculptures to acrylic on canvas to digital prints, the exhibit showcased pieces for everyone to enjoy.

This year was a particularly difficult one for the gallery’s staff to get this exhibit up and running during the pandemic. According to Rachael Murphy, a senior intern at the gallery who also contributed artwork to the exhibit, setting up the show took a bit of time-crunching, as it usually doesn’t get put up until the end of the year. Staff only had five weeks to hang, position and prepare all of the pieces.

Another challenge the Lord Hall Gallery faced was advertising. Since the show had to be put up so quickly, it was difficult to get advertising out to the public.

“Word [only] just started going out and now the show is coming down,” Murphy said.

Regardless of being pressed for time and struggling to get word out to the public, the show still exceeded expectations. One of the 16 senior artists, Raquel Garmony, found the show to be a success.

“I’d just like to add that everyone did a terrific job of putting in their artwork and putting the show together,” Garmony said.

“I think one of the big themes we had that we all connected with was the title ‘Surviving Anecdotes,’ where all these pieces of art were made before the pandemic happened,” Murphy said. “They were kind of these lasting pieces of what we did before we shut down and everything changed.”

Another senior artist, Darria Hansen, shared that she noticed a common theme of health concerns among the exhibit’s displayed pieces.

“Individual motifs aside, themes of one’s health and horror aesthetics were recurring ones, it seemed,” Hansen said. “It’s a reaction to our current times, a way to vent frustrations we can’t act on otherwise — be them personal problems, like chronic disorders or political unrest.”

Amidst all the displays of artwork and themes was a printmaking piece, “Brice the Behemoth.” This piece, done by Murphy, is a woodcut relief print. Her inspiration comes from spending her summer in Weld, Maine, using wildlife around her as an inspiration — a more uplifting theme with the pandemic and health concerns aside.

“This print is a search for positivity during these stressful and uncertain times,” Murphy said. “Interactions with these creatures fixed my mind in the present. I find myself reflecting on the value of small moments, becoming an observer of my surroundings instead of an active participant. This print expands out to broader commentary on humanity’s odd relationship to nature, desiring connection and control, whether we are aware of these unique interactions or not.”

Another piece of artwork, a sculpture made from found objects titled Polycystic, was done by Hansen. Polycystic brings awareness to the condition of polycystic ovary syndrome (PCOS), and the weight Hansen experiences day-to-day.

“It reflects on my experience with PCOS, the violent nature of the physical pain it’s brought me, and the unfortunate view society has of me and others with the disorder,” Hansen said.

Hansen also shared that her theme for most of her artwork was horror and her goal at the end of the day was to make viewers feel what she feels when looking at her pieces. This is accomplished in her other pieces of artwork which are also featured in “Surviving Anecdotes.” Along with “Polycystic,” her printmaking pieces, “Second Sphere: Dysphoria” and “Third Sphere: Self Harm” represent and resonate her theme even further. “Second Sphere: Dysphoria” is an intaglio etching and “Third Sphere: Self Harm” is a woodcut relief print.

“My prints further ideas of stress and mental health, with the angels being some of my favorite works,” Hansen said. “‘Second Sphere: Dysphoria’ and ‘Third Sphere: Self Harm’ are from a developing series of mine dealing with mental health and social issues through the lens of biblically accurate angels, with each ‘sphere’ denoting how corporeal [“Third Sphere”] or incorporeal [“First Sphere”] a feeling or issue is. There’s something almost cathartic about appropriating Christian imagery and using it to talk about [LGBTQ] issues like body dysphoria. It’s something I’m actually continuing with printmaking currently, and hope to submit to the student exhibition next year.”

Despite the challenges “Surviving Anecdotes” faced in order to make the exhibit possible, it was without a doubt a success. All 16 senior artists displayed talented, emotional and personal pieces of artwork for the public to admire. With having to set up this showcase in a short five weeks and having it come out immaculate, the staff and students of the Lord Hall Gallery should be proud of what they effectively delivered.