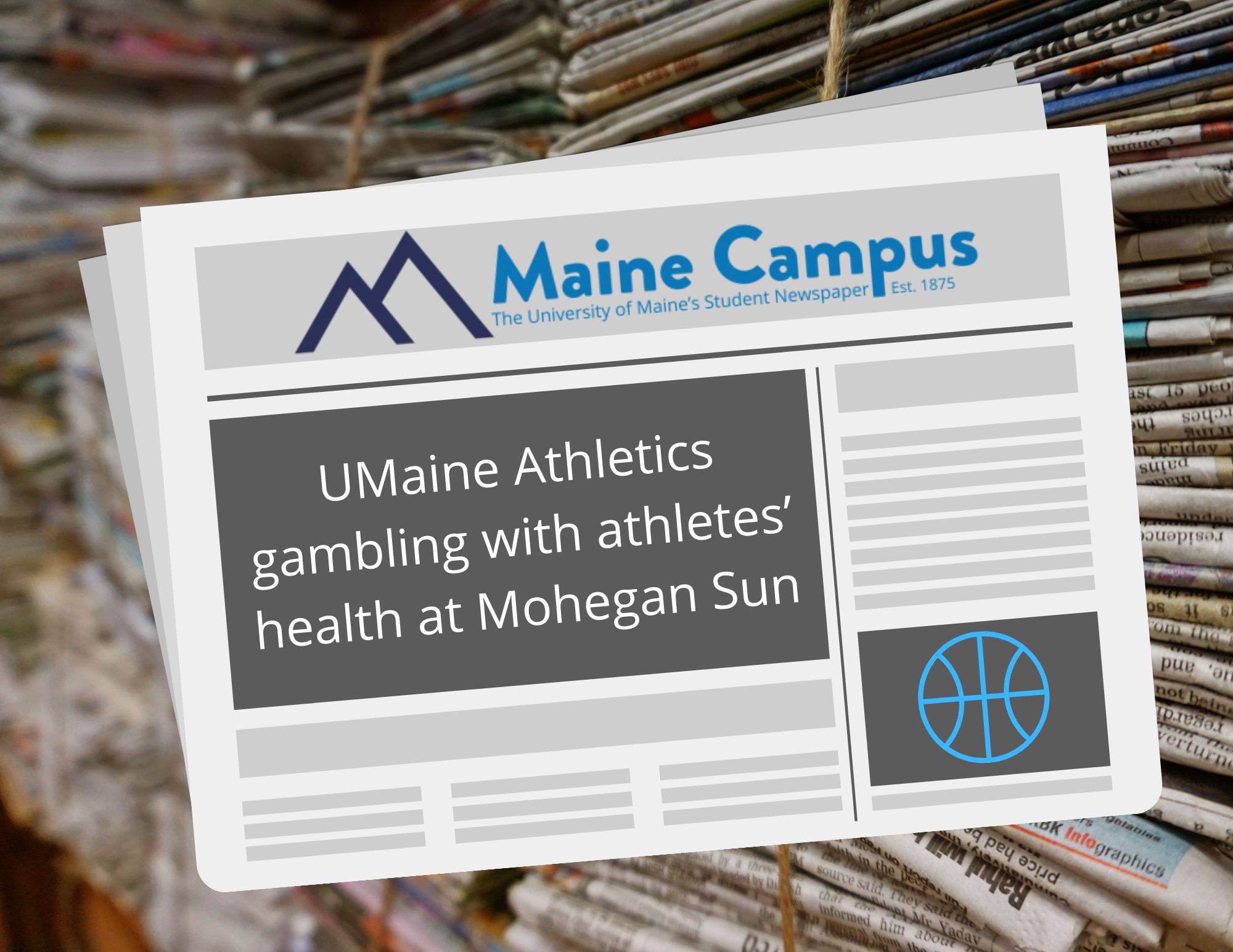 On Nov. 24, President Joan Ferrini-Mundy announced that all University of Maine athletics would pause through Dec. 8 in the wake of multiple positive test results within the athletic programs. According to Bangor Daily News (BDN), the decision was in response to a member of the men’s basketball team receiving a positive result after arriving at the Mohegan Sun Arena in Connecticut for a number of scheduled games. In a Tuesday news release, UMaine Athletic Director Ken Ralph said, “We will do all we can to positively engage our students in the safest way possible.” While Mr. Ralph’s statement may have been made in earnest, it’s clear at this point that the safest way to “engage” student athletes is to not have them compete at all.

COVID-19 cases have been surging across the U.S., and Maine specifically has hit record numbers of cases as well as hospitalizations in the weeks leading up to Thanksgiving. Prior to the holiday, Gov. Janet Mills pleaded with Maine residents to avoid traveling: “Think every time you want to do something, go somewhere that you’re used to doing and going to, ‘Do I really have to go out right now? Do I really have to go there?’”

These are the questions to ask UMaine athletics, because some might argue that teams really do not, and should not, have to travel to compete in the midst of a surging pandemic. This is the very conclusion that leaders of the New England Small College Athletic Conference (NESCAC), which includes Colby, Bates and Bowdoin, came to. In a statement signed by the president of every college in the conference, it was announced that the winter season for all sports would be cancelled, citing policies instituted on campuses to protect the health and safety of students, such as limiting travel, physical distancing and a later start to the spring semester, as eliminating the possibility of athletic events.

There are financial considerations when it comes to the state’s only Division I athletics program that colleges in the NESCAC, a Division III conference, usually do not have. According to BDN, UMaine athletics lost $150,000 in revenue due to the cancellation of the NCAA Division I men’s basketball tournament last spring, and Director Ralph anticipated “an excess of $1 million in lost revenue” if the school were unable to sell in-person seats for football, men’s and women’s ice hockey or men’s and women’s basketball in the fall, which it has not been able to.

In short, there is more than the student-athletes’ chance to compete at risk for UMaine and many other Division I programs across the country. However, that is not to say that the student-athletes have not been an enthusiastic force behind making the competitions possible. Before the semester even started, UMaine athletes set the tone on campus by wearing masks during practice despite any physical irritation or restriction of breathing. Red Gendron, UMaine’s men’s ice hockey coach, told the Portland Press Herald that “if that’s the thing that is going to make a difference between us having a season or not playing at all, then I think myself and every player in the program will say we’ll wear a mask.”

One would expect nothing but this level of determination and spirit from UMaine’s athletes. But it is not necessarily their responsibility to consider risks of leaving the state to compete. That responsibility would fall on the university’s administration. In the university’s press release regarding the positive test results, President Ferrini-Mundy said, “the health of our student athletes, coaches, staff and communities comes first.”

While the university has dedicated significant resources to testing teams weekly throughout the semester and daily during the week before competitions, these policies do not necessarily reflect putting student-athletes’ health first. Testing is generally reactive rather than preventative, which is part of the reason that the men’s basketball team only found out about a positive result after arriving at Mohegan Sun. The only measure that would truly represent putting athletes’ health first would be avoiding competition with other teams all together, especially when case statistics are as concerning as they are.

This is not to suggest that the university administration has been purposefully negligent in its decision-making regarding athletics. The circumstances of this academic year have been completely unprecedented. Equally, it would be unfair to suggest that the athletic department leadership are allowing revenue concerns to cloud their judgement, especially considering the extremely generous $90 million gift that the department will be receiving over the next 10 years from the Harold Alfond Foundation.

Rather, President Ferrini-Mundy’s decisions to pause all athletic activities should be applauded, and one should hope that she and other campus leaders continue to put the health of athletes first come Dec. 8.