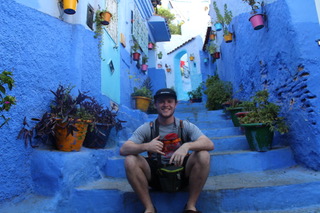 On Nov. 19, the UMaine Study Abroad program announced the winners of its annual photo contest: Aidan Salisbury as the first-place winner, Kevin Lynch Greenberg and Zachary Ayvaisian as second and third-place winners, and Megan Driscoll as a close third-place runner-up.

Salisbury, a third-year mechanical engineering student and study abroad photo contest first-place winner, reflected upon his semester abroad in Valencia, a city on the Mediterranean coast of Spain.

“So I bought a camera a year before I studied abroad, and I pretty much took it wherever I went,” Salisbury said. “I’ve never been super into photography, but got into it [during] study abroad. I’ve done a couple contests with the photos and never won anything, so this was pretty cool. I thought I’d take some quick pictures and show them off.”

During his stay, Salisbury took mechanical engineering courses and gained a rich, new perspective on his major that he otherwise would have not found if he had not studied abroad.

“There’s some really good professors over there,” Salisbury said. “A couple [were] studying aerospace engineering, so they were able to show us a bunch of the different programs over there, but they had a couple of fighter jets and helicopters [as well]. That was pretty cool.”

Although Salisbury was not able to become a UMaine study abroad ambassador this semester, if he was to continue with UMaine’s Study Abroad program in the future, he would invest his time in pursuing mechanical engineering abroad.

As engaging with students through online modalities is one of the easier ways to get students involved during a time spent primarily online, the Study Abroad office only had to make minimal changes to effectively broaden their student reach and spread awareness about their international programs, even while traveling isn’t a possibility until next year.

“Usually we’ll post all the submissions on the Instagram page and the most amount of likes will win that way,” Livingston said. “But this year we did the voting through a Google form so that we could open it up to more people other than just on our Instagram page. We [were able to send] it out to other students and faculty as well.”

Although Livingston noted that the Study Abroad program is picking up both in interest and popularity despite the lockdown, she highlighted how the office took the lack of travel into account when planning this event and looking toward other opportunities to connect with students.

“It’s really different because obviously we can’t study abroad right now, so what we are trying to focus on is just getting kids interested and talking about it for the future; just so they can start thinking about classes that they might need to take before or saving some electives to take when you study abroad,” Livingston said. “We’re just trying to get the word out there and get people like talking. [We’re spreading] different information through social media [since that’s one of the only things we can do right now].”

Next semester, the Study Abroad office will possibly be working on a Q&A session with current study abroad ambassadors and previous study abroad students to both answer questions about the program and share international experiences with prospective students.

“I 100% recommend the study abroad experience,” Livingston said. “Whether you go for a semester, [an] internship in the summer or however long you go, it’s so worth it. It’s a way for you to experience more about the world you’re in. You learn more about yourself, and as long as you’re willing to push yourself and [are] excited to have a good experience, then you will.”

As for upcoming events, the Study Abroad office has opened applications with waived fees for the fall 2021 and spring 2022 semesters, for which applications can be submitted on their website. Additionally, the Study Abroad office is posting photo contest winner profiles on their social media accounts highlighting each student’s winning image and study abroad experience.