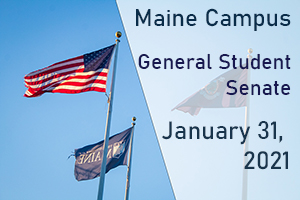 The General Student Senate meeting on Jan. 26 began with roll call and the approval of the meeting minutes by Vice President Zachary Wyles.

President Harrison Ransley welcomed back all of the senators for the new semester. He addressed that employees will be allowed to work from home in order to better contain the spread of the coronavirus. He will also start reaching out to all senators, along with Vice President Wyles, in order to obtain more feedback and better improve the UMaine Student Government. This also will serve as a way for the president to gauge everyone’s goals while they are in office. The big issue brought up by the president was the increase in the budget. The UMaine Student Government has a surplus of unallocated funds. This is largely in part due to COVID-19, but also in part due to a lack of club interests for funding. With this in mind, the president is looking for ideas to use some of this money for projects that will benefit the school and community as a whole.

Vice President Wyles also welcomed back senators. He is looking at starting some new projects this semester and will continue to update the senate as those ideas come to fruition. Wyles and President Pro Tempore Peter Alexander attended a leadership conference in West Palm Beach at the end of last semester. When they attended they were able to learn several new leadership techniques and ideas that they hope to incorporate into the Student Government. Vice President of Financial Affairs Jacob Tauke reiterated Ransley’s remarks on the Student Government’s budget and the importance of finding new projects to use it on. Vice President of Student Organizations Emmeline Willey is working on several new projects and is looking for extra help from senators. Vice President of Student Entertainment Chase Flaherty said that this semester will be very similar to the last in regards to entertainment. He is trying to put together some new projects and will keep senators updated. Winter Carnival is coming up this February. Advisor to Student Government Lauri Sidelko welcomed back senators for the new semester. She announced that the school is taking similar precautions to COVID-19 and should check their emails about testing times.

The University of Maine System Board of Trustees Representative Abigail Despres reintroduced herself to the senate after not being able to attend meetings last semester and announced her office hours. Representative to UMaine ROTC Austin Westfield said that there was a successful transition in the chain of command.

The Board of Commuter and Non-Traditional students will  continue donating to the Black Bear Exchange this semester. They hope to gain enough funding to do more trips to the store. They also want to focus more efforts on recruitment. The Honors College Student Advisory Board was able to organize over 75,000 meals for the meal packout last semester. They will be holding officer elections next Thursday. They also launched an Honors College Minecraft server, and are trying to come up with more creative ways to keep the community connected. Panhellenic council will be having its first meeting of the semester on Thursday and will be having their leadership summit at the end of the month. Sustainability and Environmental Action Committee will be having their first meeting at the end of the month.

Wilde Stein has been having meetings in order to focus on putting together events for later in the semester. These events are the Drag Show as well as an alternative to Lavender Prom.

There was an act to modify the standing rules to create an absence policy, because the senate currently does not have a written one. Members will be dismissed after 3 three unexcused absences. This was passed. Another act to modify signature requirements for senators, allowing them to get online signatures instead of written ones, was going to be reviewed.

The senate then went into final roll call and adjourned shortly after.

Study beats: 12 streams to get in the groove
UMaine football looks toward unconventional spring season