Editorial: The commodification of water spells uncertainty for Maine citizens 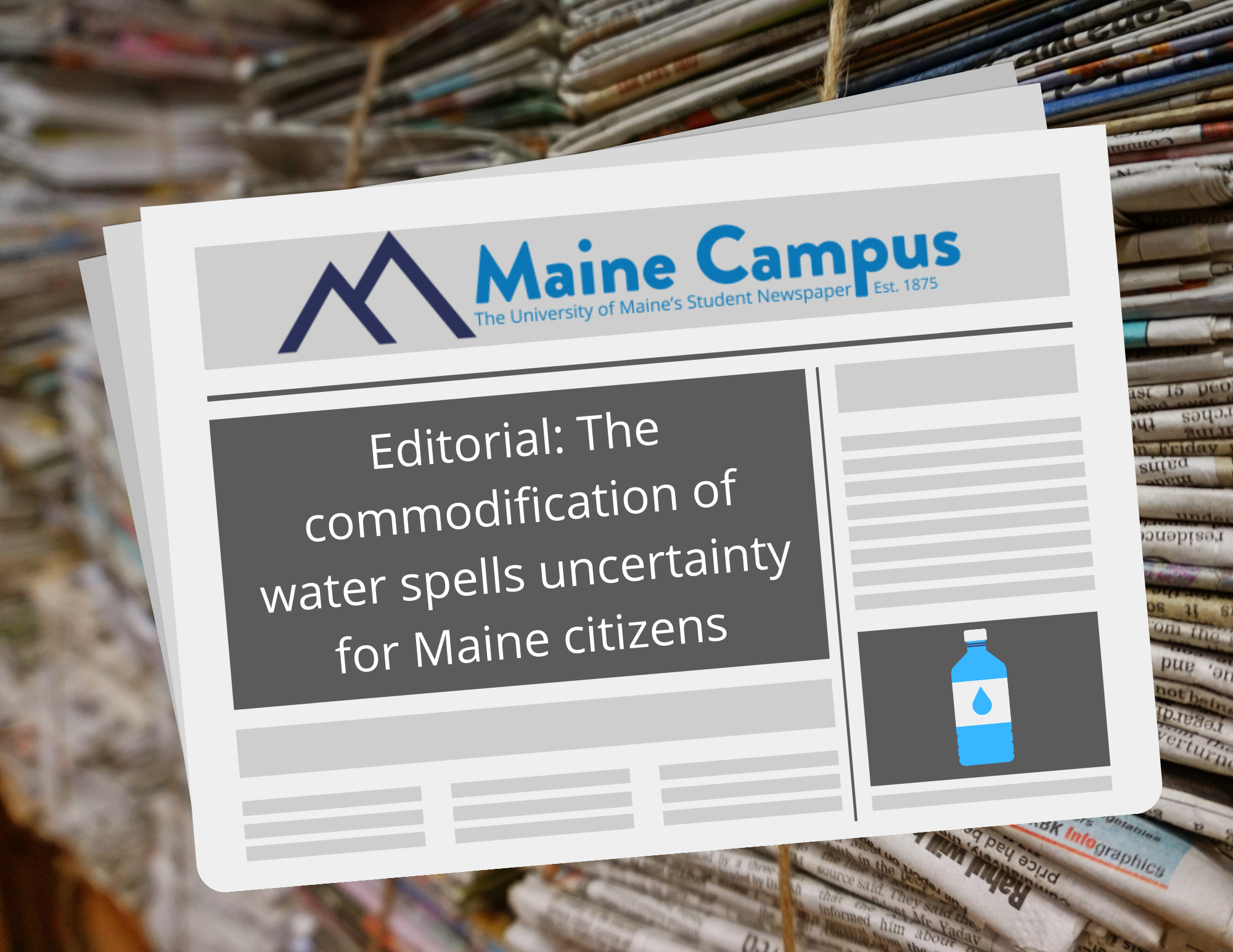 On Saturday, Feb. 13, Community Water Justice, a group dedicated to combating water privatization in Maine, held a protest in Fryeburg in response to the news that Nestle S.A., the Swiss food and drink processing corporation, was in negotiations with One Rock Capital Partners LLC, a New York-based private equity firm, for the sale of a number of Nestle’s bottled water brands, including the Poland Spring brand and its nine springs in the state. While Mainers should not necessarily have to worry about a Wall Street firm pillaging their aquifers, the public anxiety surrounding this possible sale speaks to a larger, ongoing debate in the U.S. regarding the commodification of water as its availability becomes increasingly unreliable.

While Maine has not yet come to a reckoning with its use of water as a public utility, it is safe to say that the entire country has been continually struck by the fragility of the water supply in states like California. According to CNN, California accounts for 9% of water usage in the U.S., with the majority of the water used for agriculture. Because of this, when drought strikes parts of the state it can be crippling for farmers who are forced to spend unprecedented financial resources on surplus water from other parts of the state when demand is highest.

Wall Street’s solution to this problem was, of course, to make it more complicated. They did so by introducing a market for water futures; a futures contract is, in short, an agreement to a fixed price on a specific asset (water) at a specific point in the future. This new option stands to benefit farmers who can, essentially, purchase water for the parts of the year when they anticipate drought.

However, for anyone who has seen “The Big Short” or “Mad Max,” the implications of this unprecedented avenue for purchasing water rights may be a little unsettling. It doesn’t take an economics degree to imagine a scenario where a smug Wall Street hedge fund purchases an abundance of water futures and then sells them high when farmers are desperate. As Basav Sen, climate justice project director at the Institute for Policy Studies, told Gizmodo, “What this represents is a cynical attempt at setting up what’s almost like a betting casino so some people can make money from others suffering.”

With regard to Nestle’s dealings in Maine, the situation is not nearly as dystopian, but there are some shady aspects. For instance, in 2015 all three members of Maine’s Public Utilities Commission, which exists to regulate entities like Nestle, had to recuse themselves for conflicts of interest when a new, 45-year deal between the private Fryeburg Water Company (now the public Fryeburg Water District) and Nestle came to them for review. However, there is little evidence to support accusations that Nestle’s withdrawals from aquifers in towns like Fryeburg and Lincoln have negatively impacted citizens’ access to those same resources. You won’t find “Mad Max” here.

Confrontations between residents in the Fryeburg area, under the impression they have received the raw end of the deal, and Nestle have been ongoing since the early 2000s, according to The Guardian. On their website, the corporation has a page titled “Know the Facts about Nestle Waters in Maine,” where they lay out claims, such as “Poland Spring pays next to nothing to take water from Maine,” and proceeds to debunk them by arguing that their rates for purchasing spring water were “approved by the Maine Public Utilities Commission” (the same three members who had to recuse themselves for conflicts of interest). Suffice to say, from the perspectives of many citizens, it has not seemed like the playing field was particularly level.

However, now that Nestle is selling Poland Spring, many are coming to the conclusion that the devil you know is preferable to the devil you don’t.

“Nestle is at least a little bit more responsive to negative press,” Nickie Seckera, co-founder of Community Water Justice, said in an interview with the Bangor Daily News, “I think a private-equity firm is going to be even less responsive to the concerns of Maine people.”

What both the emergence of a market for water futures and the negotiations for the sale of Poland Spring signal is that there is a growing concern across the country that a basic resource for people’s survival will become poker chips for those that live thousands of miles away from them.

Congressional representatives like Rashida Tlaib and Debbie Dingell have prioritized combatting the privatization of water, with actions like reintroducing the Emergency Water is a Human Right Act in January, which would direct $1.5 billion to keeping taps on for struggling Americans. But this is not an issue that can be solved solely at the federal level. It falls on states, municipalities and citizens to consider the value of their natural resources, and whether that value is being distributed equally or being exploited by corporations and hedge funds with deep pockets and friends in high places.