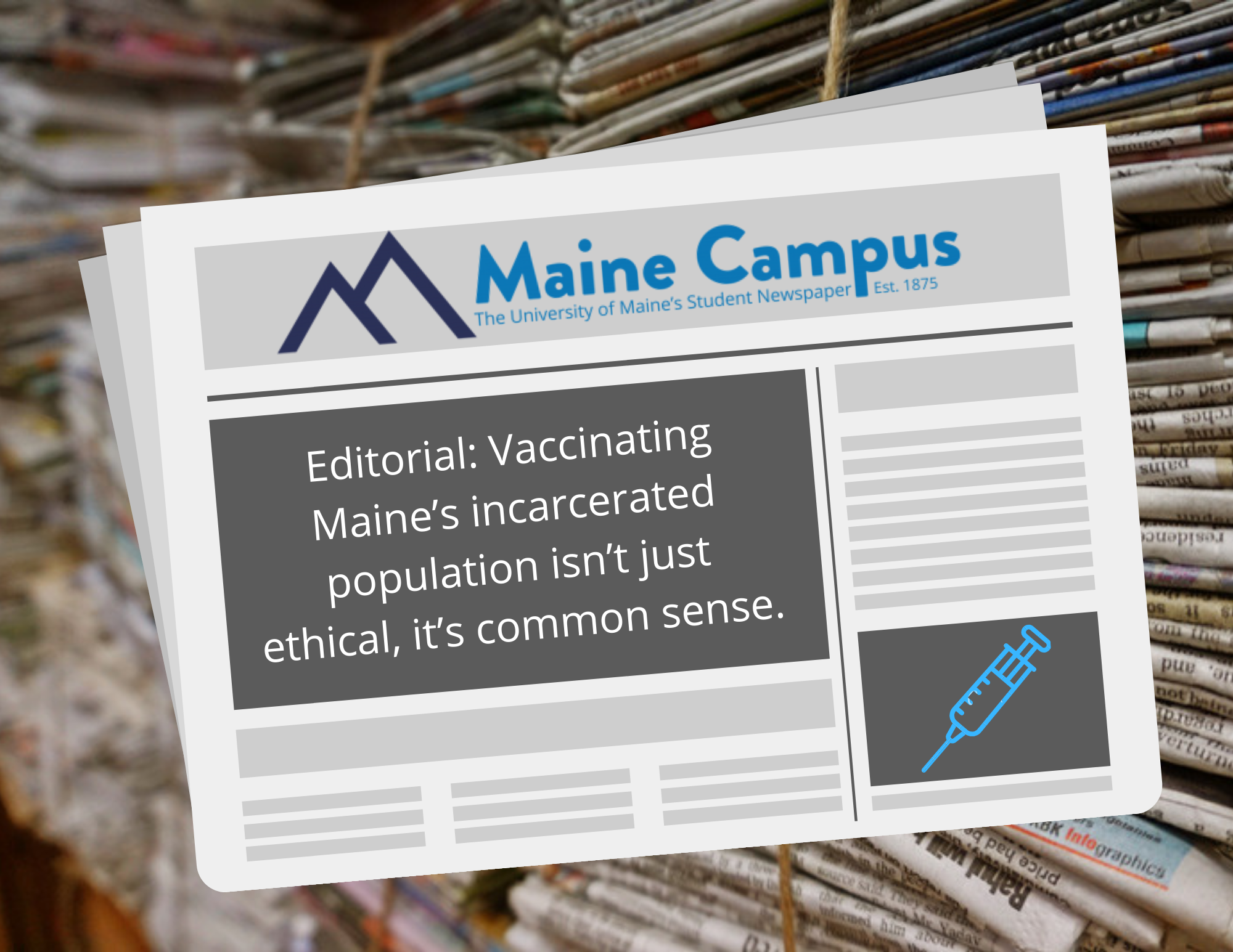 On Feb. 5, the report on an independent probe into an outbreak at the York County Jail in Alfred this past summer was released. The report found that before the outbreak, which resulted in the infection of 48 inmates, 43 employees and 16 members of their households, the jail had failed to adhere to a number of COVID-19 preventions, including conducting health screenings and requiring corrections officers to wear masks at all times. This event showcased the exorbitant risk that incarcerated individuals and corrections staff face as a result of the crowded environment that they live and work in. However, as a result of ill-logic or negligence, the Maine Center for Disease Control and Prevention (CDC) and Governor Mills have neither required corrections staff to take the vaccine that has been made available to them in order to work, nor included the state’s vulnerable incarcerated population in any phase of vaccination plans.

45% of Americans have or have had an immediate family member incarcerated, according to a 2019 study from Cornell. There are 2.3 million individuals serving sentences in U.S. correctional and detention facilities, manned by 400,000 officers and jailers, all considered to be at a “high risk” of contracting COVID-19 by the CDC. Outbreaks in these facilities have not only been shown to harm the incarcerated population, many of whom suffer from chronic illnesses such as hypertension and asthma, but also the communities that surround them. However, because these people are concealed from the public eye, the failure of the CDC and many states to explicitly include incarcerated populations in any stage of their vaccination plans has been left largely unresolved.

This is not to suggest that there are not serious and legitimate logistical hurdles facing vaccine distribution in every state. Vaccine supplies are limited, detention centers are not outfitted with freezers capable of maintaining the necessary temperatures to stock vaccine doses, and The New York Times suggests that incarcerated individuals may not be inclined to accept the vaccine. Not to mention that, on its face, many members of the greater public may find it unjust to vaccinate convicted felons at the same time as, or before, individuals living in other congregate care settings, such as nursing homes.

However, even if the majority of a constituency believes that incarcerated people should stand at the back of the vaccination line on purely ethical grounds, the fact of the matter is that an individual vaccination given to someone in a correctional facility may do more good for the community than elsewhere. According to Maine Public, 100 of the largest single-site outbreaks have occurred in correctional facilities; thus, to inoculate a relatively small population (about 1,700 people in Maine) would result in a disproportionate benefit for the state as a whole.

According to a Columbia study in collaboration with Yale and University of North Carolina researchers, there are currently 12 states/territories that have come to a similar conclusion and included their incarcerated population in the first phase of vaccine distribution. However, governments still seem to have reservations with regards to the possibility of public backlash. Massachusetts, which has chosen to make incarcerated individuals a priority in its vaccination process, notably fails to include correctional facilities in the explanation of eligible “congregate care settings” on the official vaccination webpage, or make any mention of them at all for that matter.

Part of the problem is the lack of a comprehensive plan for all states to adhere to. According to the CDC, “Jurisdictions are encouraged to vaccinate staff and incarcerated/detained persons of correctional or detention facilities at the same time because of their shared increased risk of disease.” Many states have either chosen to prioritize the vaccinations of neither, or, like Maine, they have offered vaccinations to corrections staff exclusively.

While the state’s decision is a pretty problematic statement on the value of incarcerated people’s lives, the other, more immediate issue is that not all of the corrections officers have accepted the vaccination. According to Maine Public, only 70% have done so at York County Jail, where it only took one symptomatic employee, who had just come from a now infamous wedding-turned-spreader-event in Millinocket, to ignite last summer’s outbreak. It does not take a rocket scientist to understand that a wall that is only 30% percent finished is not going to protect much of anything, it’s just a waste of time and money.

Any chance of a unified approach in terms of vaccine distribution was largely botched by the previous administration, but now there is a real chance for a course-correct. To simply accept that 2.3 million people, who face a significantly higher risk of contracting COVID-19 and dying of it than the majority of the U.S. population, will not receive the vaccine until the third phase of the process in most states is, well, unacceptable. There needs to be an effort in Maine, and in every other state, to start treating CDC “recommendations” as gospel; vaccinating incarcerated individuals and corrections staff needs to be a collective priority. Should a corrections officer decide they do not want to be vaccinated or wear a mask, then perhaps it would be best that they stay home and collect their stimulus check.