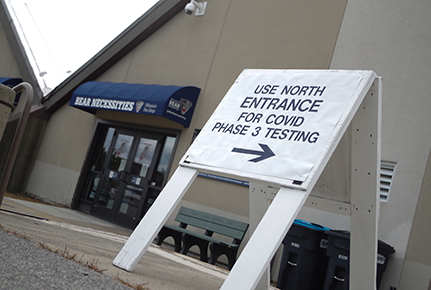 Last week, the University of Maine halted campus wide testing for COVID-19 due to many glitches and errors in the process Photos from MEC Archive

Those students who went into testing on Feb. 1 were greeted by a line which wrapped all the way from Wells Conference Center around Dunn Hall and back onto the University Mall by Hart Hall. This line, according to some students who were interviewed about the experience, took anywhere from  30 minutes to an hour to get through. Temperatures that day were in the mid to low  20s which made for a rather cold and grueling wait.

“I set my time up at 11 a.m. I thought, ‘I’ll get my test done quickly, I’ll get lunch, and I’ll be back home in time for class,” Kaitlin Sutton, a third-year nursing student, said about her experience with the testing process, which became an unexpectedly long portion of her day.

“I was outside for 45 minutes in the cold, and they made me download an app,” Sutton continued.  “I was waiting outside pretty much the whole time.”

The app Sutton mentioned, called the Safer Communities App, was a source of  much commotion during last week’s testing fiasco. It was designed to keep track of students’ information and immediately link test results to a mobile device, as well as provide a way to check in and out of assigned testing slots.

“Having to download an app in an area of campus with notoriously spotty WiFi was not ideal,” Kyle Myers, a third-year ecology and environmental science major student said. “The app crashed when people were trying to leave, which clogged the line.”

“A lot of people’s QR codes weren’t working,”  Amanda Popadak, a third-year biology  student, said. She reported similar issues with the app not functioning properly, which led to some congestion in the testing facility. “I had to wait for over an hour… a couple of staff members seemed very overwhelmed, and a lot had to stay later than they’d signed up for.”

Among these technical difficulties and long lines,  another problem plagued the testing facility during the week of Feb. 1. Around 700 samples went to waste due to the malfunctioning QR codes. Reportedly around 26% of the total samples collected that day could not be matched or traced back to the people who had given them, rendering them useless.

Chancellor Dannel Malloy addressed these malfunctions in a letter to students and faculty released on Feb. 2.

“Our scanners had difficulty reading some of the collection tube ‘QR’ codes. The check-in process was too slow because we did not have an automated process ready for accepting testing consent forms. Together, these problems made yesterday’s testing a frustrating experience for some, and it took too long for nearly everyone,” Malloy wrote, promising that the situation would be remedied in the coming days.

This issue has been resolved, with the use of traditional barcode labels being used in place of the QR codes which caused the scanners so much trouble. According to students, as well as UMaine staff, there has been a noticeable increase in the efficiency of the testing process.

“We’ve been testing them today, and they’re all 100%  working so we get an accurate scan,” Dan Demeritt, who is in charge of writing UMaine press releases,  told the Bangor Daily News last Wednesday Feb. 3, reassuring that the testing process had been improved. “We also got a software update, so that we can verify that the scan is working and is accepted at the point of collection.”

These updates and changes were greatly appreciated by the students interviewed, who compared the differences between this second week of testing and their initial experiences.

“It was quick and efficient, I only had to wait about three minutes to get into the testing facility,” Popadak noted,  explaining how the experience this week differed from the one she’d had on Feb. 1.

“This week was fine, there were no issues,” Myers said of his own experience. “It does feel less streamlined than the nose swab, but the second week was much better.”

With phase six of the UMaine COVID-19 testing process underway, and the bugs from the first day of T3 Shield testing straightened out, UMaine looks forward to a semester of efficient and accurate COVID-19 tests.