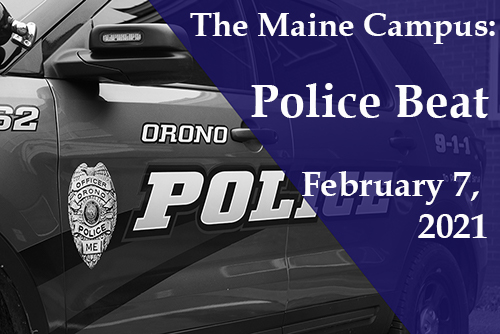 After midnight, University of Maine Police Department (UMPD) officers found a group of students smoking on the Hilltop Quad. They had their medical marijuana cards and were not charged but referred to conduct for having marijuana on campus.

At 11:14 p.m. in York Hall a female student was found to be smoking marijuana. She was found with drug paraphernalia and was under 21 so she was referred to conduct. The student relinquished the marijuana.

At 10:06 p.m. 11 students were referred to conduct after cramming into a dorm room for a party. UMPD officers found lots of marijuana and drug paraphernalia, and students hid in the closets when found by officers. Everyone was sent to conduct for the use of drugs, along with violating COVID-19 rules.

At 12:06 a.m. Alexander Brown, 19, of York Hall, was issued a summons for possession of alcohol by consumption. He was not cooperative.

At 11:12 p.m. officers arrived at the Hilltop lot where they found five people in a car smoking marijuana. Nobody had a medical marijuana card and Anthony Brenton took ownership of the marijuana. He received a summons for sale and use of drug paraphernalia.

At 6 a.m. officers were asked to respond to the first floor women’s bathroom in Somerset Hall. A female student was found unconscious and transferred to Eastern Maine Medical Center. She was with five friends. All were referred to conduct for alcohol possession and violating COVID-19 rules.

UMPD officers were dispatched to the third floor of Cumberland Hall when a male student was punched in the face and maced. Makylee Chan, 19, was charged with assault and the criminal use of disabling chemicals. Her court date is April 8.